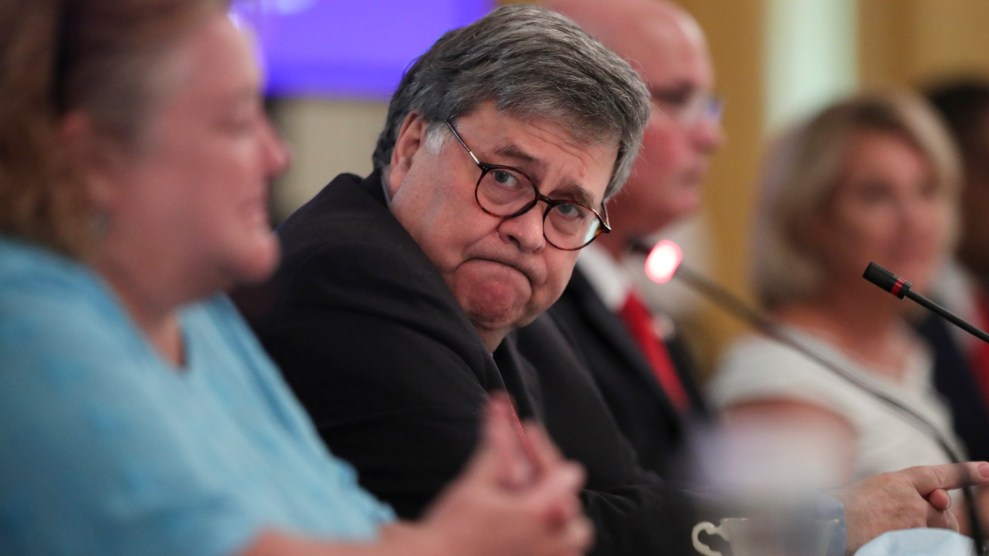 Geoffrey Berman, the recently ousted US attorney for the Southern District of New York, last Thursday told the House Judiciary Committee, around 25 times, that he feared Attorney General William Barr’s efforts to replace him with someone from outside that office would have caused the “delay and disruption” of active investigations.

Berman’s former office is reportedly investigating Trump’s lawyer, Rudy Giuliani, in relation to a scheme to help Trump by digging up dirt on Joe Biden in Ukraine. The office has looked into the finances of Trump’s 2016 inaugural committee. It is prosecuting Halkbank, a Turkish state-run bank, for violating US sanctions on Iran—a probe that former national security adviser John Bolton alleges Trump promised to curtail as a favor to Turkey’s president. And Manhattan prosecutors have probed the Trump Organization and hush money payments related to Trump’s 2016 campaign.

“I believe the attorney general was trying to entice me to resign so that an outsider could be put into the acting US attorney position at the Southern District of New York, which would have resulted in the delay and disruption of ongoing investigations,” Berman said, one of various iterations of this assertion. Berman also threw in the word “impede” half a dozen times.

Berman, under the terms he negotiated with the Justice Department, declined to be more specific. During the three-hour, 41 minute interview, he said, around 15 times, that he didn’t know what Barr’s “motives” were. But he described Barr’s actions, eight times, as “irregular and unexplained.” Even so, the interview—the transcript of which was released to the public Monday evening—has received only modest attention.

In more normal times, like February, it would probably have been a bigger deal that the just-fired head of one of the most powerful prosecutor’s offices in the country seemed to suggest, over and over again, that the attorney general’s scheme might have derailed investigations of personal interest to the president.

Quick rehash: On June 19, Barr pressed Berman to accept a nomination for a different job in the Trump administration and proposed replacing him with an official from outside the office. Barr’s plan was to have Trump nominate Jay Clayton, the head of the Securities and Exchange Commission, for Berman’s job. Barr also wanted Craig Carpenito, the United States attorney for New Jersey, to serve simultaneously as acting head of the Manhattan office while Clayton awaited Senate confirmation. (“The U.S. attorney for the Southern District of New York is not a part-time position,” Berman remarked in his congressional testimony.)

Berman refused to resign, but Barr nevertheless issued a press release that falsely said Berman had agreed to step down. (This was one of a series of highly controversial moves the Trump administration has recently announced on Friday nights. Last Friday, Trump commuted the three-year prison sentence that his longtime adviser Roger Stone received for lying to Congress and witness tampering). Berman responded to Barr with his own defiant release, refuting Barr’s claim that he was resigning and arguing, based on the unusual circumstances of his appointment, that Barr lacked the power to oust him. The next day, Barr announced Trump had fired Berman, a claim Trump promptly undermined by denying any involvement. Still, Berman then agreed to step down. He says that is because Barr quietly agreed to make Berman’s deputy, Audrey Strauss—rather than Carpenito—the acting head of the office. “With that concession, and having full confidence that Audrey would continue the important work of the office, I decided to step down and not litigate my removal,” Berman said Thursday.

Stephen Castor, the GOP congressional lawyer who drew attention for his stumbles during last fall’s impeachment hearings, returned to form Thursday when he asked Berman: “There was no quid pro quo proposed, correct?” Berman: “You know, he wanted me to resign to take a position. I assume you could call that a quid pro quo. You resign and you get this, that would mean quid pro quo.”

Absent from Thursday’s interview was discussion of which specific investigations Berman was worried about being delayed, disrupted, or impeded—and what if any impact they might have on Trump’s chances in November. Berman declined, 35 times, to answer questions related to investigations.

But Democratic aides pointed out Thursday that prosecutors in Manhattan are reportedly investigating Giuliani, Trump’s personal lawyer, for activity connected to the scheme that led to Trump’s impeachment. Reuters reported last year that a New York grand jury subpoenaed records of payments to Giuliani. And the New York Times said prosecutors were looking into whether Giuliani broke foreign lobbying laws by allegedly helping a Ukrainian official influence US policy toward Ukraine. Giuliani disputes doing this and has questioned whether he is really under investigation.

Wherever that alleged investigation stands, a “delay and disruption” of it would presumably benefit Trump.

Berman’s former office in 2018 also essentially called Trump an unindicted conspirator (“Individual-1”) in a campaign fraud scheme in which his former personal lawyer, Michael Cohen, paid women who said they’d had affairs with Trump to stay silent ahead of the 2016 election. The Justice Department has a policy that bars prosecuting a sitting president. If Trump loses, prosecutors at least in theory could charge Trump in January.