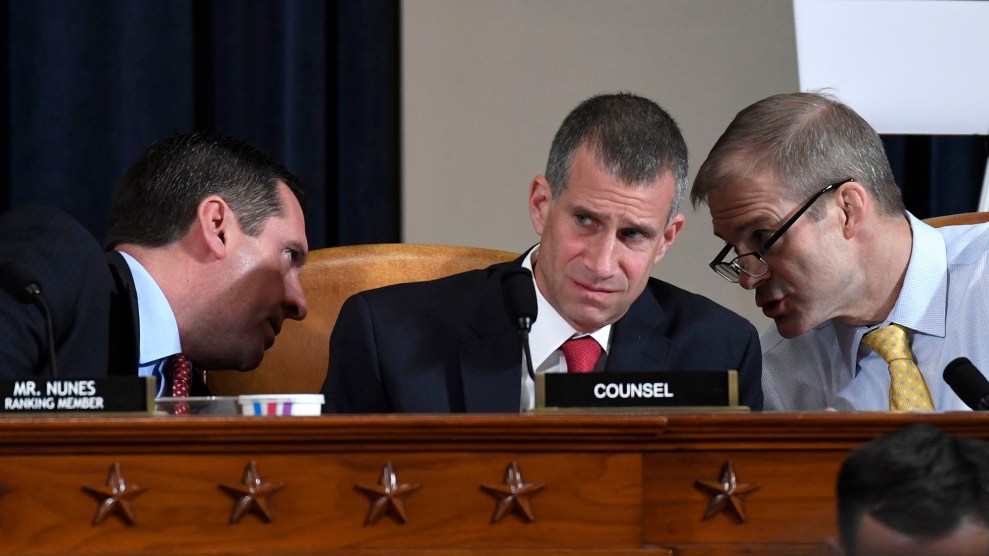 In his presentation during Monday’s House impeachment hearing, Republican counsel Steve Castor deployed a thoroughly debunked talking point to argue that President Donald Trump did nothing wrong when he pressured Ukrainian President Volodymyr Zelensky to investigate Trump’s political enemies. Several weeks before the two leaders’ infamous phone call, Trump had put a hold on vital military aid to Ukraine. But according to Castor, Trump’s requests for investigations did not constitute a quid pro quo because top Ukrainian officials were completely unaware that the aid had been stopped.

“At the time of the July 25 call, senior officials in Kyiv did not know that the security assistance was paused,” Castor claimed. “They did not learn it was paused until the pause was reported publicly in the US media on August 28.” This matters, according to Castor, because if the Ukrainians didn’t know that the aid was in jeopardy, then Trump could not have coerced them into announcing politically motivated investigations.

To support his claim, Castor cited Kurt Volker—Trump’s former emissary for peace talks in Ukraine—who told Congress last month, “I believe that the Ukrainians became aware of the hold on August 29, not before. That date is the first time any of them asked me about the hold.” Republicans, including Trump, have been making this argument since the scandal burst into public view. But as we now know, Trump, Volker, and Castor are simply wrong.

One day after Volker made that statement, Pentagon official Laura Cooper testified that on July 25—the same day as the Trump-Zelensky call—her staff was informed by the State Department that the Ukrainian Embassy in Washington, DC, was aware of the “situation” surrounding the aid.

NEW: Laura Cooper says since her closed-door testimony earlier this month, her staff has informed her that on July 25 — the same day as Trump's call with Zelensky — they were asked by a Ukrainian embassy official about “what was going on with Ukraine's security assistance.” pic.twitter.com/5vpAHEsiA5

Congressional Republicans have since sought to downplay that revelation. In a report issued last week, they cited a November interview that Bloomberg conducted with Andriy Yermak, a top aide to Zelenksy. According to Bloomberg, Yermak and another source claimed that officials at the Ukrainian Embassy “did not inform Zelenskiy right away that the aid was threatened” and that “the Ukrainian president and his key advisers learned of it only in a Politico report in late August.”

But Yermak’s claims have been flatly contradicted by another Ukrainian official. Olena Zerkal, who until recently was Ukraine’s deputy foreign minister, told the New York Times that she and other key officials in Kyiv were informed of the aid freeze within days of the July 25 call:

Ms. Zerkal says she became aware of the hold by July 30, a few days after Mr. Trump’s phone call with Mr. Zelensky.

She said she read a diplomatic cable from Ukrainian officials in Washington about the hold and asked for a meeting with a senior aide to Mr. Zelensky to discuss it on July 30. The cable had been sent the previous week, she said, but she could not confirm the precise date it had been transmitted.

The Ukrainian presidential administration was copied as a recipient of the cable from the embassy in Washington, she said, adding: “We received it simultaneously.”

Whether senior Ukrainian officials knew of the aid freeze before the July 25 phone call or not, the accounts of Ms. Zerkal and Ms. Cooper show that the Ukrainian government was aware of the hold on aid through several critical weeks in August as United States diplomats pressed Mr. Zelensky to make a public statement on the investigations.

Zerkal recently left Zelensky’s administration, telling the Times that she had resigned in protest. She alleged that Zelensky’s team had tried to prevent her from disclosing facts that might further involve Ukraine in the impeachment controversy.