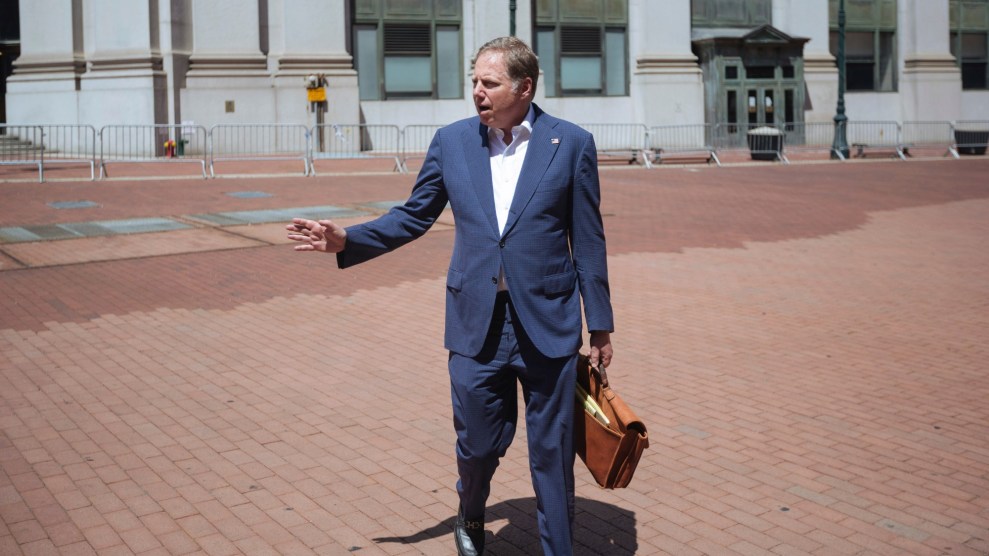 President Donald Trump on Saturday fired the top federal prosecutor in Manhattan, who is investigating Trump allies, according to Attorney General William Barr. Trump’s action came after the prosecutor, Geoffrey Berman, the US Attorney for the Southern District of New York, defied Barr’s effort to quietly push him out on Friday night.

Berman arrived at his Manhattan office early Saturday,  wearing a blue suit and an American flag label. “I’m just here to do my job,” he told reporters, according to the Associated Press.

Barr announced late Friday that Berman was resigning from his post; shortly after, Berman said he had no intention of resigning and had only learned of the news from Barr’s press release. Berman also said he can’t be fired due to the unusual circumstances of his appointment. Named in 2018 as interim US Attorney, Berman’s nomination was never confirmed by the Senate. Instead, he was appointed by judges of the United States District Court through a legal provision intended to ensure the office is not left vacant. Berman said he will step down only “when a presidentially appointed nominee is confirmed by the Senate. Until then, our investigations will move forward without delay or interruption.”

Barr responded Saturday with a letter to Berman: “Because you have declared that you have no intention of resigning, I have asked the President to remove you as of today, and he has done so,” Barr said. Barr said that Berman’s top deputy, Audrey Strauss, would become the acting United States Attorney, a change from Friday night, when Barr said that Craig Carpenito, the United States Attorney for the District of New Jersey, would act as interim head of the Manhattan office.

Berman’s office is investigating whether Trump’s personal lawyer, Rudy Giuliani, broke the law in his efforts to dig up allegations in Ukraine that he hoped would harm Trump’s political opponents. The push to oust Berman also comes a few days after bombshell allegations by Trump’s former National Security Adviser John Bolton about Trump’s effort to intervene in Berman’s prosecution of a Turkish state-run bank, Halkbank, accused of violating US sanctions against Iran.

Bolton wrote in his memoir, publication of which Barr has tried unsucessfully to block, that Mr. Trump in 2018 had promised Turkish President Recep Tayyip Erdogan, that he would interfere in an ongoing investigation against a Turkish company accused of violating Iranian sanctions. Bolton claims that Trump told the Erdogan in May 2018 that he would intervene to block the DOJ’s prosecution of Halkbank. Trump “told Erdogan he would take care of things, explaining that the Southern District [of New York] prosecutors were not his people, but were Obama people, a problem that would be fixed when they were replaced by his people,” Bolton writes, according to the Washington Post. CNN has reported that Attorney General William Barr, under pressure from Trump, did try to stave off Halkbank’s indictment by federal prosecutors in Manhattan, though they were eventually indicted last fall amid a breakdown in US-Turkish relations.

This and other efforts by Trump to intervene with DOJ to do favors for foreign dictators “looked like obstruction of justice as a way of life, which we couldn’t accept,” Bolton writes.

The Southern District of New York has been investigating a series of matters of concern for Trump: Berman’s office prosecuted and won a guilty plea from Trump’s former personal lawyer Michael Cohen, who says that at Trump’s behest he violated campaign finance laws to make hush money payments prior to the 2016 election to silence women who said they’d had affairs with Trump. The prosecution led to a broader investigation into Trump’s private company and associates. Prosecutors under Berman have also investigated Trump’s inaugural committee, examining whether it received illegal contributions from foreigners seeking favor with Trump.

Barr’s move to oust Berman is part of a long-running effort by Trump to impose control over the Manhattan office. In March 2017 Trump fired Berman’s predecessor, Preet Bharara, after making a series of unusual efforts to establish direct communications with Bharara. Prior to picking Berman, a former Giuliani colleague, as Bharara’s replacement, Trump personally interviewed him, a move Democrats ripped as unprecedented and inappropriate. In 2018, Trump reportedly ripped then-Acting Attorney General Matthew Whitaker over the Cohen investigation and pressed Whitaker to reign it in. (In February 2019, Whitaker told the House Judiciary: “At no time has the White House asked for nor have I provided any promises or commitments concerning the special counsel’s investigation or any other investigation.”)

The New York Times reported Friday that “Trump had been discussing removing Mr. Berman for some time with a small group of advisers. The paper said that “Trump has been upset with Mr. Berman ever since the Manhattan prosecutor’s office pursued a case against Mr. Cohen.”

It is already clear that Barr’s effort to quietly oust Berman on a Friday night has backfired. House Judiciary Chairman Jerrold Nadler (D-N.Y.) said Friday night that he will ask Berman to testify Wednesday at a previously scheduled hearing on Barr’s efforts to intervene in criminal cases related to Trump. And in a sign that Trump and Barr may struggle to get their way in Manhattan, Sen. Lindsey Graham, (R-S.C.), the normally staunch Trump ally who chairs the Senate Judiciary Committee, said that he will not proceed with Clayton’s nomination to replace Berman unless New York’s senators, Democrats Chuck Schumer and Kirsten Gillibrand, agree. That’s unlikely. “This late Friday night dismissal reeks of potential corruption of the legal process,” Schumer said Friday night. “What is angering President Trump? A previous action by this U.S. Attorney or one that is ongoing?”