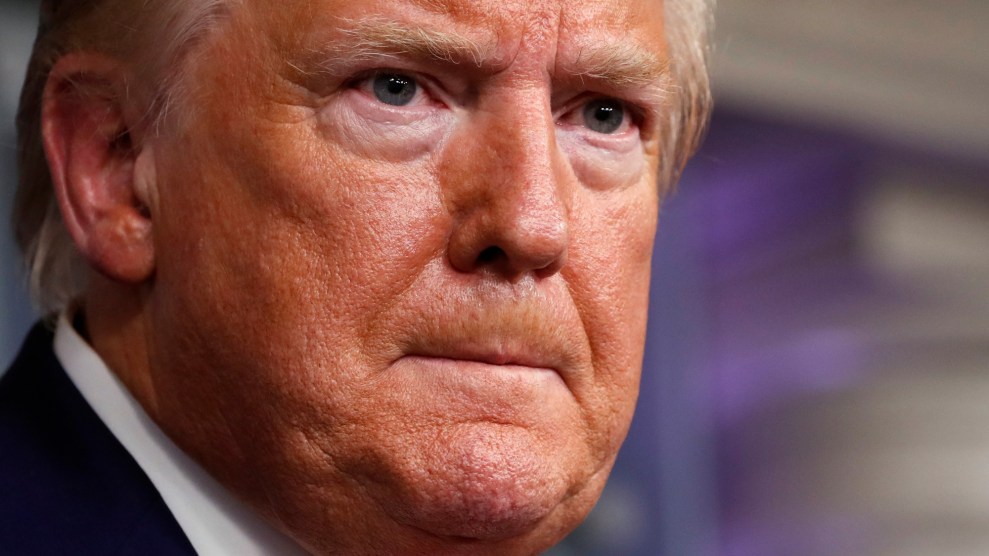 In the midst of a pandemic, Donald Trump is working hard to avoid facing independent oversight.

On Tuesday, the president ousted Glenn Fine, a respected former Justice Department inspector general, from his role as chair of the new Pandemic Response Accountability Committee that Congress created to oversee $2 trillion in emergency funding aimed at propping up the economy during the coronavirus pandemic. The White House used a bureaucratic maneuver to remove Fine, who was serving as acting Defense Department inspector general. By replacing Fine in his Pentagon job, and demoting him to be the department’s principal deputy inspector general, Trump removed him from eligibility to chair the new panel. (Fine’s replacement as acting Defense Department watchdog is EPA Inspector General Sean O’Donnell, who is now tasked with overseeing both high profile agencies, a Pentagon spokesperson said.)

This was just the latest in a series of recent steps by Trump aimed at restricting the power of nonpartisan officials to oversee his administration.

“President Trump is abusing the coronavirus pandemic to eliminate honest and independent public servants because they are willing to speak truth to power and because he is so clearly afraid of strong oversight,” Senate Minority Leader Chuck Schumer (D-N.Y.) said Tuesday.

House Armed Services Chairman Adam Smith (D-Wash.) told reporters Tuesday that he is “very concerned” about the state of independent oversight under Trump. “What he cares about is people kissing his ass,” Smith said. “Whether the job gets done is secondary.”

Trump’s move to sideline Fine came after the president’s earlier declaration that he may not abide by a provision in the recent stimulus bill giving the chairman of the accountability committee power to demand information from executive branch agencies on how they are spending funds, and requiring the IG to report any agency refusal to comply to Congress “without delay.”

In a signing statement released after he signed the bill, Trump asserted the right to bar the IG from reporting to Congress. “I do not understand, and my administration will not treat, this provision as permitting the [new Inspector General] to issue reports to the Congress without the presidential supervision required” by the Constitution, the signing statement said.

“President Trump is abusing the coronavirus pandemic to eliminate honest and independent public servants because they are willing to speak truth to power and because he is so clearly afraid of strong oversight.”

Trump has also drawn criticism for picking Brian Miller, a White House lawyer, for a separate new inspector general post overseeing a $500 billion coronavirus relief fund housed in the Treasury Department. Although Miller previously served as inspector general of the General Services Administration and won praise from some oversight advocates for his work there, critics argue his recent work in a White House Counsel’s office that has attempted to stonewall all congressional oversight of Trump disqualifies him for the post.

Trump has recently launched other attacks on government watchdogs. When asked by reporters Monday about a report by the inspector general of the Health and Human Services Department detailing severe shortages of coronavirus testing capabilities at hospitals around the country, Trump ranted at one reporter and disputed the findings by falsely claiming HHS principal deputy inspector general Christi Grimm, who has worked in HHS since 1999, was an Obama administration holdover. This testing shortage has been widely reported on, and the report was based on a survey of hundreds of US hospitals.

On Friday, Trump abruptly removed Michael Atkinson as Intelligence Community Inspector General. In an extraordinary admission during a press conference Saturday, Trump indicated that he fired Atkinson as retaliation for the watchdog’s role informing Congress of a whistleblower report detailing Trump’s effort last year to coerce Ukraine into producing dirt on his political opponents. “He took a fake report and he brought it to Congress,” Trump said, ignoring the reality that the complaint was shown to be accurate by a slew of witnesses who testified before the House of Representatives, and that Atkinson was legally required to inform lawmakers of its existence.

At least one congressional committee is looking into whether Atkinson’s ouster, in addition to addressing Trump’s craving for revenge, also aimed to thwart ongoing probes by the IG’s office. In a letter Tuesday to Richard Grenell, Trump’s acting director of national intelligence, House Intelligence Chairman Adam Schiff (D-Calif.) said his panel “is reviewing whether [Atkinson’s] termination was intended to curb any ongoing investigations or reviews being undertaken by his office.”