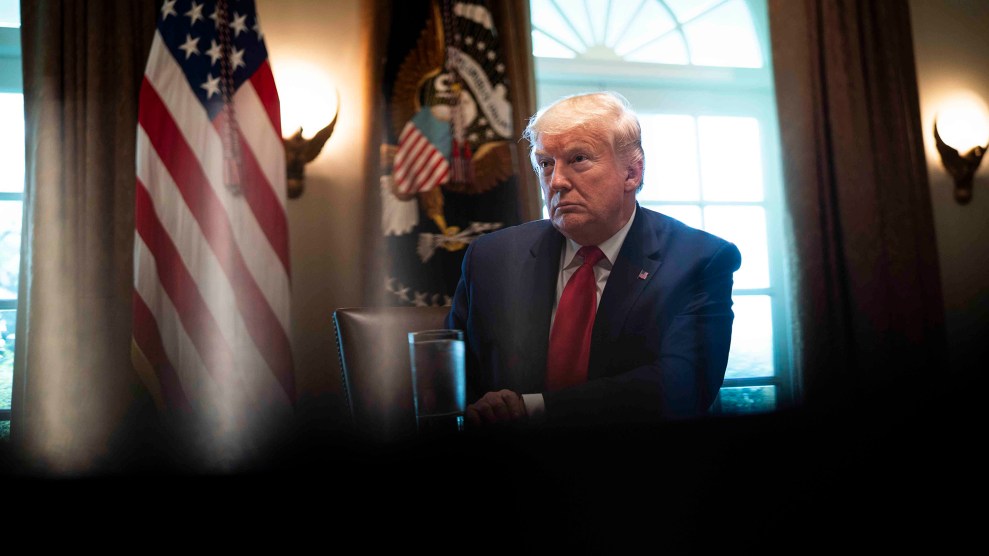 President Donald Trump at a roundtable meeting with energy sector CEOs in the Cabinet Room of the White House on April 3, 2020. Doug Mills-Pool/Getty Images

Late Friday, President Donald Trump informed Congress that he intended to remove the inspector general of the Intelligence Community, whose insistence that Congress be made aware of a whistleblower’s complaint about Trump’s dealings with Ukraine sparked the president’s impeachment. Now, as the country’s attention is caught up in a deadly pandemic, Trump is taking steps to remove not only the IC watchdog but also the acting inspector general overseeing the pandemic bailout money, while likely replacing them with those he considers to be more loyal.

Democrats in Congress called the move an attempt to retaliate against those who seek to hold Trump accountable and take over the inspector general system in other agencies, which constitute the government’s independent watchdogs.

He continued: “It undermines the transparency and oversight the American people expect of their government, and in its absence will undoubtedly lead to even greater corruption in the Administration.”

In order to remove the Intelligence Community Inspector General, the president must give Congress a cause and then wait 30 days after informing the intelligence community. Trump sidestepped that rule Friday by putting Atkinson on administrative leave immediately.

The president also took steps Friday to appoint his own chosen watchdog to oversee the $500 billion corporate bailout fund created by the $2 trillion coronavirus aid package, even though  Glenn Fine, the acting inspector general for the Defense Department, had already been appointed pursuant to the legislation to fill that role. Trump announced that a White House attorney who, according to the New York Times was involved with the production—or withholding—of White House documents during Trump’s impeachment, would oversee the $500 billion corporate bailout fund. Also on Friday night, Trump nominated multiple people to inspectors general positions, including the position replacing Fine who would oversee the Defense Department.

The late-night move has the markings of an attempt to consolidate power over the intelligence community and to limit the role of independent watchdogs across government. Michael Horowitz, the inspector general for the Justice Department and chair of the Council of Inspectors General on Integrity and Efficiency, praised Atkinson in a statement Saturday morning, as well as his handling of the whistleblower complaint. Horowitz also promised aggressive oversight of the $2 trillion aid package.

“Whether it’s Lt. Col. Vindman, Captain Crozier, or Intelligence Community Inspector General Michael Atkinson: President Trump fires people for telling the truth,” Senate Minority Leader Chuck Schumer of New York said in a statement Friday night. “Michael Atkinson is a man of integrity who has served our nation for almost two decades. Being fired for having the courage to speak truth to power makes him a patriot.”