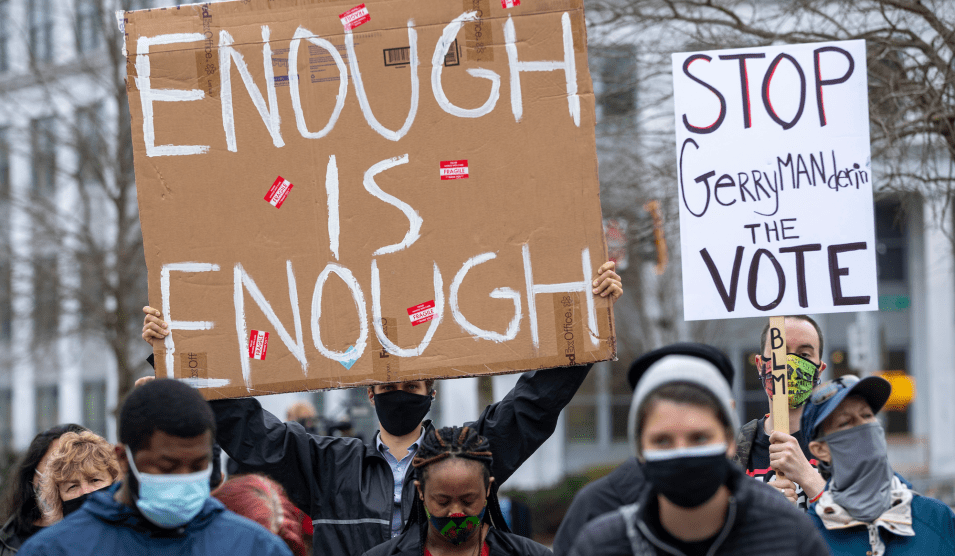 Demonstrators hold signs as they protest voter suppression bill outside of the Georgia State Capitol Building in Atlanta on March 1, 2021. Alyssa Pointer/Atlanta Journal-Constitution via AP

Fueled by Trump’s big lie that the 2020 election was stolen and retaliating against Democratic victories in November, Republicans are dramatically intensifying their campaign to restrict access to the ballot. According to a new report by the Brennan Center for Justice, 361 bills to make it harder to vote have been introduced in 47 states in the first three months of this year, overwhelmingly by Republicans. That’s up from 253 restrictive bills tallied as of February 19, an increase of 43 percent in just over a month.

“In a backlash to 2020’s historic voter turnout, and under the pretense of responding to baseless and racist allegations of voter fraud and election irregularities, state lawmakers have introduced a startling number of bills to curb the vote,” the report says.

And more laws are coming down the pike: 55 restrictive bills are moving through state legislatures in 24 states; 29 have passed at least one legislative chamber.

“They are following the Trump playbook based on Trump’s lies so that they can get an advantage in future elections and accomplish through legislation what they couldn’t accomplish through litigation and intimidation in 2020.” –@AriBerman on Republican efforts to restrict voting pic.twitter.com/cu3pllJN7s

But GOP efforts to undermine access to the ballot, particularly in Georgia, are leading to a growing backlash. More than 70 Black executives released a letter on Wednesday calling on corporate America to oppose efforts to limit voting rights.

“There is no middle ground here,” said Kenneth Chenault, a former chief executive of American Express. “You either are for more people voting, or you want to suppress the vote.”

And CEOs from Atlanta-based Delta and Coca-Cola, who refused to criticize the Georgia law as it moved through the legislature, denounced it on Wednesday after facing threats of a public boycott. “The entire rationale for this bill was based on a lie,” wrote Delta CEO Ed Bastian. “This legislation is unacceptable and it is a step backwards,” said Coca-Cola CEO James Quincey.

President Joe Biden told ESPN Wednesday night he would “strongly support” Major League Baseball moving its All-Star Game from Atlanta, which the head of the players union floated over the past week. “This is Jim Crow on steroids, what they’re doing in Georgia,” Biden said.

On the other side of the equation, 843 bills to expand access to the ballot have also been introduced in 47 states. While most have no chance of becoming law in red states, nine bills have been signed into law this year, mostly in blue states like Massachusetts, New Jersey, and New York.

On Wednesday, Virginia Gov. Ralph Northam (D) signaled his support for a state-level Voting Rights Act, which would make it the first southern state to adopt protections for voters that the Supreme Court gutted in 2013.

“At a time when voting rights are under attack across our country, Virginia is expanding access to the ballot box, not restricting it,” he said.