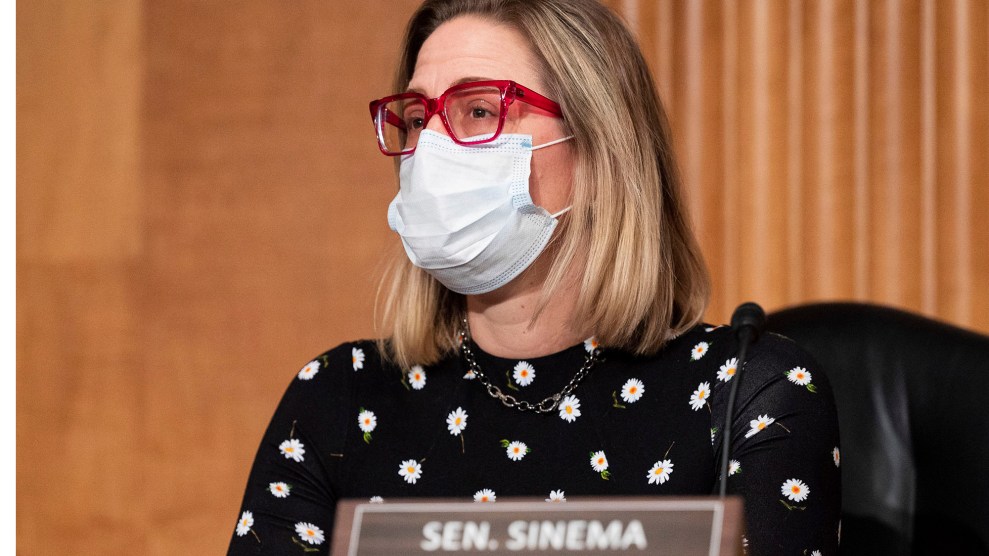 Sen. Kyrsten Sinema (D-Ariz.) at a meeting of the Senate Homeland Security and Governmental Affairs Committee on February 11.Michael Brochstein/Sipa US via AP Images

When it comes to efforts to restrict voting access, Arizona is the Georgia of the West.

Republicans in Arizona’s state legislature have introduced nearly two dozen bills that would make it harder to vote. No state other than Georgia has proposed more voting restrictions in the aftermath of the 2020 election—a contest in which, not coincidentally, Arizona and Georgia were the two traditionally red states to flip blue.

A series of bills are advancing in the legislature that would restrict access to the ballot and undermine mail-in voting, which 80 percent of Arizonans used in the last election. One would remove nearly 200,000 voters—including up to 50,000 Latino voters—from a list of 3.2 million voters who are automatically sent mail-in ballots because they did not vote by mail in two prior election cycles. Another would require that mail-in ballots be postmarked by the Thursday before the election in order to be counted, regardless of whether they arrive by Election Day, a change that could cause hundreds of thousands of ballots to be thrown out in future elections. A third would require voters without a driver’s license or government-issued photo ID to submit copies of other forms of identification with their mail-in ballots, requiring access to a copier or printer.

All of these bills would disproportionately affect Democratic-leaning constituencies, including communities of color that turned out in record numbers to elect Joe Biden by just over 10,000 votes in the state. “They definitely came with a plan to make sure the historic voter turnout we saw in 2020 never happens again,” says state representative Athena Salman, the top Democrat on the House Government and Elections Committee.

Democrats and voting rights groups are hoping that the extreme nature of these laws might just be enough to convince Kyrsten Sinema, the state’s fence-sitting moderate Democratic senator, to abolish the filibuster, which she has so far said she will not do.

Two bills in Congress would go a long way toward stopping GOP voter suppression efforts in Arizona and other states, at a time when more than 250 bills have been introduced in 43 states to make it harder to vote. The measure known as HR 1, passed by the House in early March, would dramatically expand voting access through policies like automatic and Election Day registration and universal mail-in voting, while the John Lewis Voting Rights Advancement Act (also known as HR 4) would require states with a history of discrimination to once again get federal approval for any changes to voting laws and procedures. But these bills can only pass the Senate if Democrats eliminate the 60-vote requirement to overcome a filibuster.

“In Arizona, the fate of democracy rests on those pieces of legislation passing and getting signed by the president,” Salman says.

“It’s really kind of simple. Democrats can get rid of the filibuster, or they can keep the Jim Crow filibuster and allow Republicans to pass all of these Jim Crow 2.0 laws.” —@AriBerman https://t.co/0knf6CtEip pic.twitter.com/VZpPDWvW73

Sinema is a co-sponsor of both measures, but Arizona Democrats are furious she hasn’t done more to push the bills—or denounce voter suppression efforts in her home state.

“Being on the front lines in the state legislature, as the ranking Democrat on the Government and Elections Committee, to me it just feels like this is a matter of life or death for our democracy,” says Salman. “It’s just alarming that we have members of the US Senate who are holding onto the Jim Crow filibuster, when this is a state where I have a front-row seat to the Republican Party ending any free and fair elections moving forward.”

Sinema has said that when it comes to the filibuster, “respecting the opinions of senators from the minority party will result in better, commonsense legislation.” But critics of the proposed voting restrictions say Arizona Republicans are doing everything they can to prevent the minority party from winning fair elections.

“This is a matter of life or death for our democracy. It’s just alarming that we have members of the US Senate who are holding onto the Jim Crow filibuster.”

Republican members of the state legislature signed onto Trump’s efforts to overturn the 2020 election results in Arizona and attended the insurrection on January 6. The GOP-controlled state Senate subpoenaed and threatened to jail the Republican-dominated board of supervisors in Maricopa County—where Biden was the first Democrat to win since 1948 —if they didn’t turn over voting machines and 2.1 million ballots from the county so that the legislature, in an unprecedented move, could conduct its own audit of the results. Republicans even introduced a bill to override the secretary of state’s certification of the election results and appoint its own electors to nullify the choice of the voters.

Rep. John Kavanagh, the Republican chair of the Government and Elections Committee, recently defended his party’s questioning of the election results with an argument straight out of the Jim Crow era. “Everybody shouldn’t be voting,” he told CNN last week. “Quantity is important, but we have to look at the quality of votes, as well.” That same logic was used to defend things like literacy tests and poll taxes in the segregated South.

But none of this has convinced Sinema to abandon on her position on the filibuster in order to pass voting rights legislation, even though the new voter suppression laws directly threaten the diverse coalition that voted for her in 2018.

“I’ve seen a good deal of engagement from Sen. [Mark] Kelly with the organizations that helped elect him and created the conditions for his win,” Randy Perez of the Voting Rights Lab, which advocates for voting rights at the state level, says of the state’s other recently elected Democratic senator. “That level of engagement from Sen. Sinema with her constituents is not there, unfortunately. I’m not clear on where she stands on saving our democracy.”

Perez, who previously worked for Living United for Change in Arizona (LUCHA), which mobilizes Latino voters, noted that the Latino electorate in Arizona has doubled over the past decade, laying the groundwork for Sinema’s victory in 2018 and Democratic wins in 2020. Latino turnout increased by five points from 2016 to 2020 and Native American turnout by eight points, according to data from the voting rights group All Voting Is Local.

The attack on voting rights is most pronounced in states like Arizona and Georgia because of the close margins of elections, but also because they are becoming more diverse and less white faster than the rest of the country. “There’s not just a backlash to voter turnout,” says Eliza Sweren-Becker, an attorney at the Brennan Center for Justice. “It’s also a backlash to the browning of America in those states in particular.”

Sinema’s silence on the proposed voting restrictions is at odds with the actions of the new Democratic senators from Georgia, Jon Ossoff and Raphael Warnock, who have loudly denounced GOP voter suppression efforts in their home state. “We are witnessing right now a massive and unabashed assault on voting rights and voter access unlike anything we have seen since the Jim Crow era,” Warnock said on the Senate floor on Wednesday. “It is a contradiction to say we must protect minority rights in the Senate while refusing to protect minority rights in the society.”

As efforts to rollback critical voting rights and protections are growing in Georgia—and nationwide—I’m speaking on the actions we can take in Congress to protect the foundation of our democracy & ensure every single voice is heard. #TheVoteIsSacred https://t.co/qzTnJxuyIW

“Our Democratic senators have a choice to make,” says Perez. “They can either preserve this relic of Jim Crow or they can prevent the second coming of Jim Crow and pass HR1 and HR4.” To do so will require eliminating the filibuster—and that will mean getting Sinema on board.