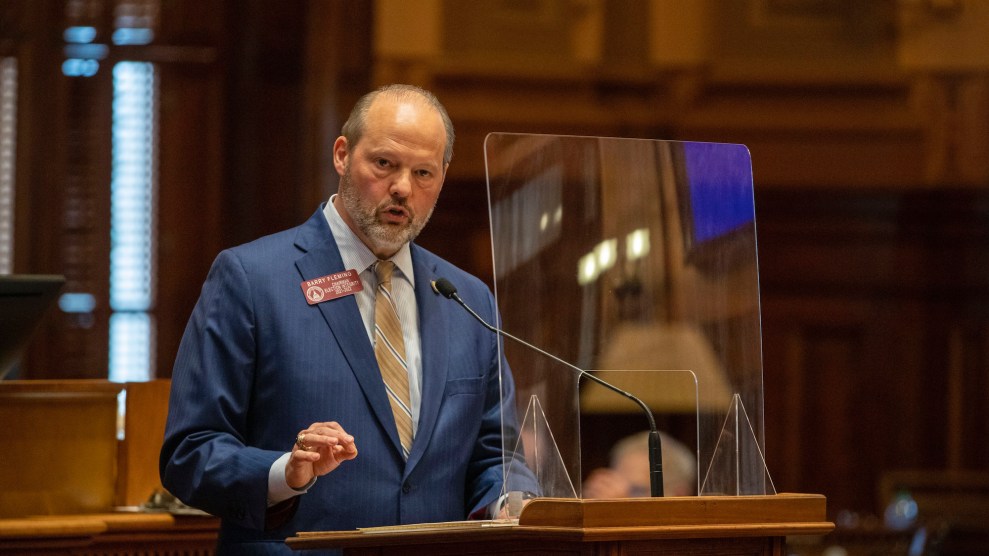 During the 2020 election cycle in Georgia, Donald Trump pressured Georgia Secretary of State Brad Raffensperger to “find 11,780 votes” to overturn Joe Biden’s victory in the state. His efforts to manipulate the electoral process failed after Raffensperger stood up to the president and defended the integrity of the election. But if the Georgia legislature has its way, Republicans could have a much easier time overturning the will of voters in future elections.

The Georgia House of Representatives passed a major power grab on Thursday on a party-line vote that would remove Raffensperger as the chair and a voting member of the state election board, which oversees the certification of elections and voting rules, and instead allow the GOP-controlled legislature to appoint a majority of the board’s members, including the chair. “This is extraordinarily dangerous,” says Sara Tindall Ghazal, the former election protection director of the Georgia Democratic Party. “When you’re appointing the majority of the body that you’re responsible to, it’s self-dealing.”

The state board, in turn, would have extraordinary power under the bill to take over county election boards it views as underperforming, raising the possibility that elections officials appointed by and beholden to the heavily gerrymandered Republican legislature could take over election operations in Democratic strongholds like Atlanta’s Fulton County, where Trump and his allies spread conspiracy theories about “suitcases” of ballots being counted by election officials in November after GOP poll monitors had left.

“It will make what we all lived through in 2020 child’s play,” Lauren Groh-Wargo, head of Fair Fight Action, a voting rights group started by Stacey Abrams, said on a call with reporters this week. “Donald Trump won’t have to strong-arm our election administrators. The most radical fringes of the Republican Party sitting in the state legislature will be able to wipe out boards of elections, challenge voters because they don’t have the right name according to them or they don’t look the way they think they should look. This is Jim Crow 2.0.”

The legislative power grab is similar to actions taken by Republicans in other states like Wisconsin, where the GOP-controlled legislature stripped power from incoming Democratic governor Tony Evers after his election in 2018. Similar efforts by GOP legislatures to take power away from secretaries of state and election officials are underway in at least eight Republican-controlled states. The Georgia bill is also one of more than 250 bills being considered by Republicans in 43 states that would make it harder to vote, and it was passed one day after Senate Minority Leader Mitch McConnell claimed in a Senate hearing that “states are not engaging in efforts to suppress voters whatsoever.”

On Thursday, President Joe Biden called voter suppression efforts “un-American” and “sick,” singling out a provision in the Georgia bill that would make it illegal to give water to people waiting to vote.

“This is extraordinarily dangerous. When you’re appointing the majority of the body that you’re responsible to, it’s self-dealing.”

The Georgia House bill not only affects who will oversee elections, but also who gets to vote. In January, the right-wing group True the Vote challenged the eligibility of hundreds of thousands of voters in runoff elections won by Democratic Senate candidates Jon Ossoff and Raphael Warnock, based on an unreliable postal database. Only a few dozen votes were actually thrown out, but under another provision of the House bill, future challenges could find much greater success. If the bill becomes law, conservative activists would be able to challenge the eligibility of an unlimited number of voters, and local election boards would be required to hear these challenges within 10 days or face sanctions from the state election board, which could pressure county officials to hastily remove eligible voters from the rolls or wrongly reject their ballots.

Groh-Wargo calls these voter challenges “attempted unconstitutional purges” and says they will become “commonplace, easier to do, and county boards of elections who don’t play ball” will be replaced.

These provisions to strip power from the secretary of state and expand challenges, inserted into the voting bill on March 17, were late additions to legislation that had already drawn widespread criticism for making it harder to vote. The bill was two pages when it was passed by the Senate, but a House committee expanded it to nearly 100 pages, renaming it the Election Integrity Act of 2021.

The earlier provisions that remain in the bill would also restrict voting access in Georgia: severely limiting mail ballot drop boxes, adding new voter ID requirements for mail-in ballots, rejecting ballots that are cast in the wrong precinct, and making it a crime to give voters food or water while they’re waiting to vote. The bill would also make it more difficult for counties to run elections by prohibiting them from accepting donations from nonprofit groups, which were used in 2020 to add more voting sites and drop boxes, and ban innovations like mobile voting buses that made voting more convenient. And it would dramatically reduce the time for runoff elections after the victories of Ossoff and Warnock, cutting them from nine weeks to four weeks.*

The net effect: It will be harder for election officials to run smooth elections and harder for voters to cast a ballot in them. And if that fails to help Republican candidates—who tend to benefit from lower turnout in the state—then the county and state election boards would have the authority to throw out votes based on voter challenges and to decline to certify close elections won by Democrats.

“This so-called election integrity bill lacks one big thing: integrity,” Democratic state Rep. Carolyn Hugley said on the House floor Thursday. “It’s nothing more than a prescription for how to get away with stealing an election.”

The Georgia Senate Ethics Committee has approved a more modest bill originally passed by the House, which will have to clear the full Senate and then be reconciled with the new House bill in a conference committee by March 31 before it is sent to Gov. Brian Kemp. So it’s possible that some of the more extreme provisions from the Election Integrity Act could be removed at that stage.

Under massive public pressure, Republicans backed off proposals to cut weekend voting in general elections—including on Sundays, when Black churches hold “Souls to the Polls” get-out-the-vote drives—and repeal no-excuse absentee voting, but instead added the provisions giving the legislature more oversight of elections in order to entrench their power through more obscure means.

“They had to go back to drawing board and figure out how to carve away more voters,” says Tindall Ghazal. “This is what they have left.”

UPDATE: The Georgia Senate passed the House bill on Thursday afternoon. It was signed by Gov. Brian Kemp a few hours later.

Correction: An earlier version of this article misstated how the bill would affect early voting and weekend voting for runoff elections.