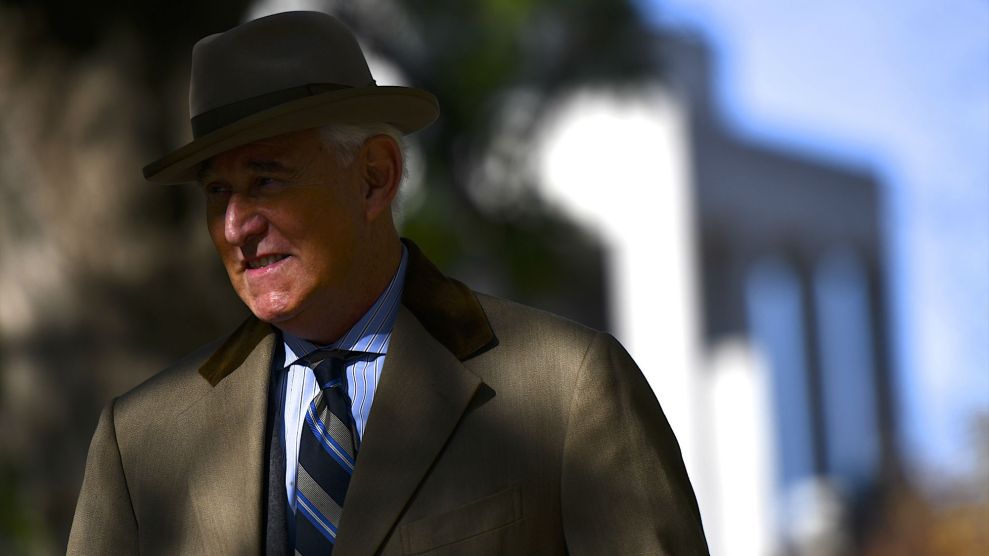 Roger Stone returns for his trial after lunch on November 13, 2019 in Washington, DC.Mark Makela/Getty Images

In his closing argument Wednesday, Roger Stone’s lawyer, Bruce Rogow, told the jury that there is really nothing to the government’s case against his client. “Much of this case, you have to ask, ‘So what?'” Rogow said.

“So what? So what?” Marando asked, with what seemed like real indignation. “If that’s the state of affairs that we’re in, I’m pretty shocked. Truth matters. Truth still matters, okay.”

Over the past week, Stone has been on trial for five counts of making false statements to the House Intelligence Committee regarding his communications about WikiLeaks. He is also charged with obstruction of justice in impeding the panel’s probe and for witness tampering, which allegedly occurred when Stone pressured an associate, comedian Randy Credico, to not give testimony that would contradict Stone’s claims. Stone has pleaded not guilty. Jurors will start deliberating tomorrow.

Though it is not a charge that Stone faces, his lawyers have argued repeatedly that the longtime Trump consigliere, who did not take the stand in his own defense, did not collude with Russia. Since Russian interference was the focus of the Intelligence Committee’s probe, Stone’s lawyers insist their client should not be convicted of lying about contacts with WikiLeaks (which was publishing Democratic emails hacked by Russia). As for witness tampering, Stone’s lawyers said that since Credico overhyped his ties to WikiLeaks in messages to Stone in 2016, it was he who played Stone; Stone was just a harmless self-promoter in their version.

Behind these arguments is a mostly implicit but potentially powerful claim: None of this matters. This is a case of Stone, the self-described dirty trickster and a notorious bullshitter, bullshitting, his lawyers suggested. Stone didn’t conspire with Russia. So who cares if he fibbed to lawmakers? This argument taps into a common refrain from defenders of President Donald Trump that many of the convictions against the president’s associates have been for lying to the FBI or Congress, not for colluding. Perjury is a minor crime, the argument goes, one that’s charged when prosecutors lack a more serious case. So what?

“We live in a world nowadays with Twitter, tweets, social media, where you can find any political view you want,” Marando said in his closing statement. “You can find your own truth.”

While the prosecutor didn’t directly mention Trump, his description came as allies of the president continue to explicitly argue that truth is relative. “Everybody has their impression of what truth is,” Rep. Mark Meadows (R-NC) told reporters on Wednesday, amid testimony outlining Trump’s effort to force Ukraine’s president to announce investigations that would benefit Trump politically.

But Marando argued that no matter what happens elsewhere, “in our institutions of self governance, courts of law or committee hearings, where people have to testify under oath, truth still matters.”

“Mr. Stone came in and he lied to Congress,” Marando thundered at jurors. “He obstructed their investigation and he tampered with a witness, and that matters. And you don’t look at that and you don’t say: ‘So what?’ For those reasons we ask you to find him guilty of the charged offenses.”

With that, the government’s case against Stone concluded.