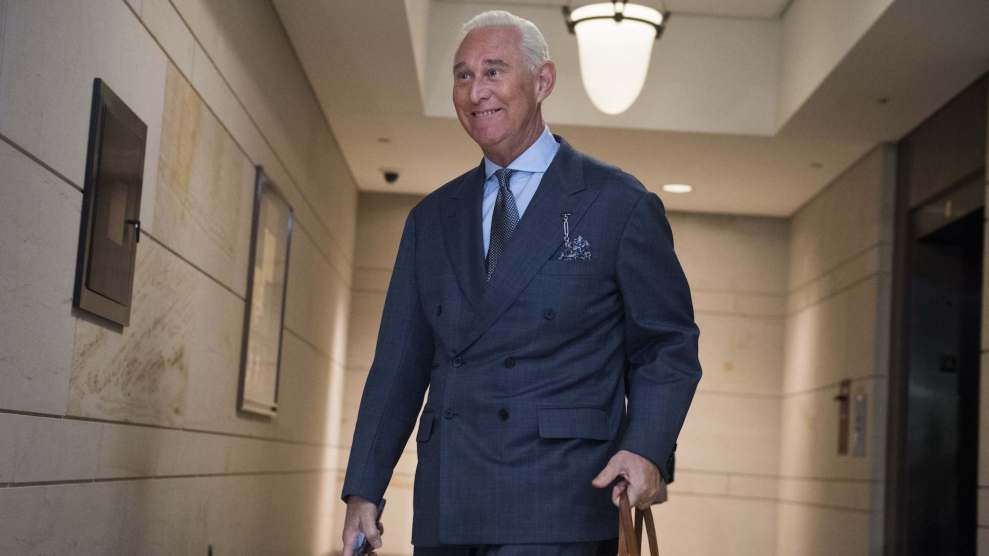 Last year, as investigators examined claims by longtime Donald Trump adviser Roger Stone that he was in contact during the 2016 election with WikiLeaks, Stone asserted that he had only learned about the group’s plans through an intermediary: Randy Credico, a comedian and political activist. Credico has denied being Stone’s go-between. And now he tells Mother Jones that Stone offered to help him pay his legal fees in what Credico believed was an effort to stop him from contradicting Stone’s account of their interactions during the 2016 campaign.

“He knew that I was upset,” Credico says. “He wanted me to be quiet. He wanted me to go along with his narrative. He didn’t want me talking to the press and saying what I was saying.”

Stone, a Republican operative who cut his teeth working for Richard Nixon’s presidential campaign, and Credico, a standup comic long involved in left-wing causes, met in 2002 through their mutual work on drug legalization efforts and formed an unlikely friendship. They are now embroiled in a bitter conflict ignited by the Russia investigations undertaken by Congress and by special counsel Robert Mueller.

“He knew that I was upset,” Credico says. “He wanted me to be quiet. He wanted me to go along with his narrative. He didn’t want me talking to the press and saying what I was saying.”

Stone does not dispute that he offered to assist Credico, including by helping him to find work. But he says he did so only because he believed that, by identifying Credico, he had cost him his job as a radio host at New York’s WBAI.

“Any effort on my part to find work for Randy (something I have done over the years) was based on the fact that my decision to ultimately reveal his name to the House Intelligence Committee…would result in his termination at WBAI,” Stone writes in an email. “It did.” (Credico left WBAI in 2017, but he says that had nothing to do with Stone.) Stone says he always urged Credico to tell the truth, and he alleges that his erstwhile pal is lying about their interactions.

Stone has been a key figure in the Russia scandal from the outset. During the 2016 campaign, he appeared on multiple occasions to accurately predict WikiLeaks’ plans to release hacked emails from Hillary Clinton’s campaign chairman, John Podesta. In August 2016, Stone claimed he had communicated with WikiLeaks’ founder Julian Assange. But in 2017, as investigators probed whether Trump associates had played a role in Russia’s plot to subvert the election, Stone changed his story. Last October, Stone told the House Intelligence Committee that Credico had served as his contact with WikiLeaks. That is: Stone claimed all he knew about the group’s plans, beyond what it said publicly, came from Credico.

Credico does have connections to WikiLeaks. He is a friend of lawyer Margaret Kunstler, who represents the group, and during the election he interviewed Assange on his WBAI radio show. But Credico disputes that he acted as Stone’s WikiLeaks interlocutor. He claims that Stone misled the House panel when he named him as his source for inside info on when WikiLeaks’ would unleash its trove of hacked documents.

In late November 2017, after Stone disclosed Credico’s identity, the House Intelligence Committee subpoenaed Credico to testify before the panel. Credico says he subsequently complained to Stone about the legal expenses he would incur from getting dragged into the Russia investigation; Stone, he claims, offered to help him defray those costs—and urged him not to challenge his claim that Credico was a back channel.

“He said, ‘Hey, look. I can’t put it together myself, but I have friends that will contribute to a defense fund,’” Credico says. He notes the timing of Stone’s offer left him with the impression that it was contingent on Credico not disputing his version of events. “He certainly did not want me to contradict him,” Credico adds.

Credico says he ignored Stone’s overtures: “I did not take him up on the offer. I never set up a defense fund.”

Credico ultimately asserted his Fifth Amendment rights, and the panel excused him from testifying. But he still faced potential scrutiny from Mueller and other investigators. In March, he complained to Stone of financial troubles, saying that his reputed role as Stone’s WikiLeaks source had caused him to lose a possible job working for Bill Samuels, a businessman who last year mulled a liberal challenge to New York Gov. Andrew Cuomo. “You cost me whatever relationship I had with Bill Samuels[.] I have not heard from him in a month,” Credico wrote in a March 10, 2018, email to Stone.

A few hours later, Stone responded with a message that said in part, “didn’t know Samuels let u go….u should have said something if u needed work.”

The next day Stone followed up: “I have woman friend running for Gov of Fla as a PRO-POT legalization Democrat– looking for campaign help”

“I also need some new liners for my show the war room,” Stone added. That is an apparent reference to Stone’s history of paying Credico occasionally for jokes and other work.

Nothing came of the Florida offer. But Credico in subsequent weeks made media appearances and public statements in which he attacked Stone’s honesty. Stone responded in his own appearance on a CBS affiliate in Miami. He said Credico was “not telling truth.” Stone suggested that Credico was hiding the fact that he had given Stone information he obtained from a female WikiLeaks lawyer—an apparent reference to Kunstler—who was “talking out of school” about Assange’s plans. In an email to Stone the same day, Credico said Stone’s comments “crossed a line,” adding that he believed Stone had lied to the House Intelligence Committee.

“You got nothing,” Stone responded. “You did everything I said you did.” And he asked: “Did you really think you could shit all over me on MSNBC and I would do nothing[?]”

The following day, Stone sent Credico a message that included the line “Prepare to die cock sucker.” Credico regarded that statement as a threat. Stone claims it was a reference to Credico having told him he had terminal prostate cancer. Credico says he doesn’t have prostate cancer.

Earlier this month, Credico appeared before a grand jury convened by Mueller. He says he wasn’t questioned about financial offers from Stone. During a CNN appearance following his grand jury appearance, Credico said he had testified that he was “not a back channel” to Assange. Credico is one of at least eight Stone associates who have been questioned by Mueller’s office, an indication that the special counsel is zeroing in on Stone.

Citing the CNN interview, Stone says via email, “The preponderance of evidence indicates that Credico perjured himself before the grand jury.”

Stone’s lawyer, Grant Smith, says his client’s offers to help Credico were made out of sympathy and had nothing to do with influencing Credico’s testimony or public remarks. “When Roger appeared before the House Intelligence Committee, he was very concerned that the disclosure of his friend Randy Credico as his connection to Julian Assange would have negative impacts on Randy’s livelihood simply by just being publicly associated with Roger,” Smith says in an email. “Roger’s concerns became reality when after Randy was named, Randy’s income waned. Roger felt sympathy for Credico after Roger had to disclose his name to Congress in response to a demand by the Committee. In the period of time after that, Roger looked for ways to help his friend. Roger has done nothing but consistently reminded Randy to tell the truth.”