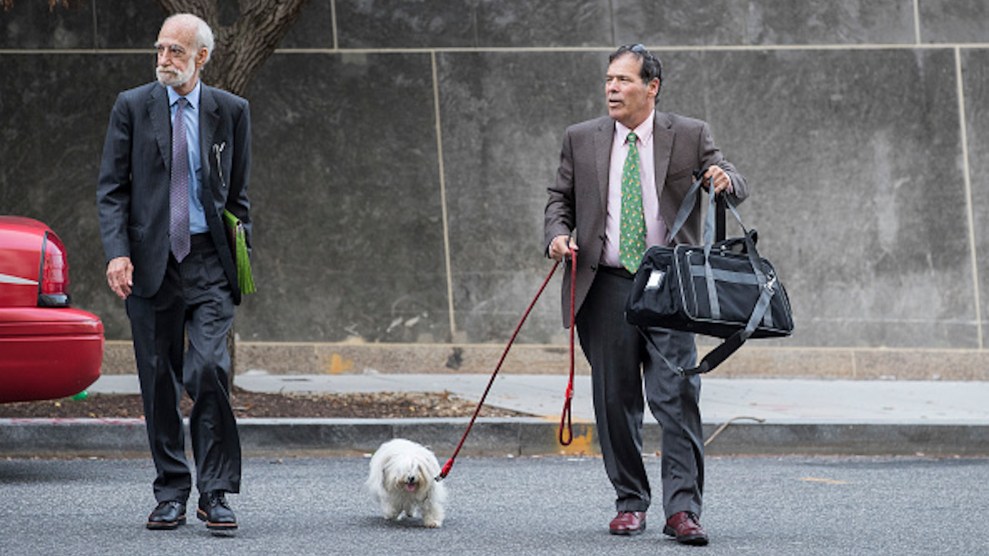 Randy Credico with his dog Bianca and his attorney on September 7. 2019.Drew Angerer/Getty Images

Special Counsel Robert Mueller is not Roger Stone’s only problem. While Mueller’s team appears to be closing on a possible indictment of Stone, the Senate Intelligence Committee is also stepping up its scrutiny of the longtime advisor to President Donald Trump.

In a September 7 letter, the committee asked Randy Credico, a comedian and progressive political activist, to agree to a voluntary interview and to turn over his communications with Stone. Intelligence Committee Chairman Richard Burr (R-N.C.) and Vice Chairman Mark Warner (D-Va.) sent the request on Friday, as Credico testified about his relationship with Stone before a grand jury convened by Mueller in Washington, DC. Credico, who obtained prosecutors’ permission to bring his dog to the grand jury interview, is one of at least eight former Stone associates federal prosecutors have questioned about Stone, a self-described dirty trickster and publicity seeker. Another Stone associate, right-wing conspiracy theorist Jerome Corsi, was questioned by Mueller’s team on Thursday, his lawyer said.

Stone has claimed that Credico, who is friendly with WikiLeaks founder Julian Assange and other people involved with the group, was his only source of information about Assange’s plans to release hacked Democratic emails ahead of the 2016 election.

Investigators are examining Stone’s contacts with online entities believed to have been fronts for Russian intelligence agents who hacked Democratic emails and then provided them to WikiLeaks. Prosecutors likely want to check Stone’s story with Credico, who has already publicly disputed some of Stone’s claims.

“I don’t want to set Randy up to be charged with some kind of perjury even if he’s telling the truth,” says Credico’s lawyer.

Credico tells Mother Jones he plans to decline to talk voluntarily with the Intelligence Committee, but will consider cooperating if the panel subpoenas him. Even then, he might assert his Fifth Amendment rights to refuse to testify, according to his lawyer, Martin Stolar. Credico previously took the Fifth when the House Intelligence Committee subpoenaed him. Still, Burr and Warner’s letter shows that the panel, the only congressional committee still conducting a substantive investigation into the Trump campaign’s suspected coordination with Russia, is taking a hard look at Stone.

In June, the committee requested an interview with Stone and asked him to turn over records. Grant Smith, one of Stone’s lawyers, said in an email last week that they “continue have regular communication with the committee” related to the request.

The Senate committee’s letter to Credico seeks any communications he had “with or about” Stone, Assange, WikiLeaks, or people affiliated with that organization. The letter also seeks any Credico communications related to Peter Smith, a longtime Republican operative who committed suicide last year—shortly before news broke that he had worked to obtain Clinton emails on the dark web from people including Russians; Charles Johnson, an alt-right figure involved with Smith’s efforts; and Henry Greenberg, a Russian-born man Stone has admitted communicating with about potentially buying hacked Clinton emails.

The letter also requests “any communications regarding any attempts to search for electronic information that may have been, or was purported to have been, stolen or compromised by cyber activity and that was related in any way to the 2016 US election.” It also seeks “communications related to Russian attempts to influence the 2016 US Presidential election” or Russian efforts to spread disinformation or damage any candidate. The senators are also asking for any documents that Credico provided “to the Special Counsel’s Office or the Federal Bureau of Investigation.”

Stolar, Credico’s lawyer, told Mother Jones he is advising his client to decline the request because the Republican-controlled committee, he says, is bent on protecting Trump, and could pursue legal action against Credico in pursuit of that goal. “I don’t trust [Burr] and I don’t want to set Randy up to be charged with some kind of perjury even if he’s telling the truth,” Stolar says. “It’s kind of like the fix is in. They’re taking a line that is favorable to the president no matter what you tell them.”

Spokeswomen for Sens. Burr and Warner declined to comment.