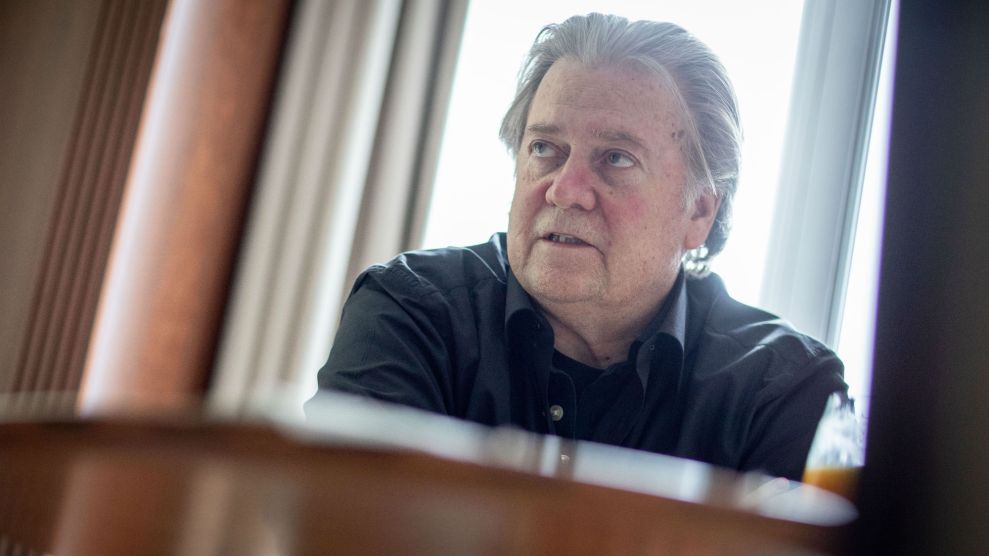 Stev Bannon, during an interview in Berlin on May 15, 2019.Kay Nietfeld/picture alliance via Getty Images

Donald Trump and members of his campaign have said many times that they never colluded with Russia in 2016. But according to bombshell testimony in federal court Friday, the Trump team did believe that it was collaborating with WikiLeaks, the organization that publicly disseminated Democratic emails that had been stolen by Russian government hackers.

The revelations came during the trial of longtime Trump adviser Roger Stone, who is accused of lying to Congress about his contacts with the Trump campaign. Stone was originally a member of that campaign; he departed in 2015 but remained an informal adviser to Trump. Steve Bannon, who became CEO of the campaign in mid-August 2016, testified Friday that campaign officials saw Stone as their “access point” to WikiLeaks and its founder, Julian Assange.

Bannon testified that in the spring and summer of 2016, before he took over the Trump campaign, Stone had “implied” in conversations with Bannon that he was in contact with Assange. “The campaign had no official access to WikiLeaks and Julian Assange, but Roger would be considered if we needed an access point, because he had implied or told me he had a relationship with WikiLeaks and Julian Assange,” Bannon said.

“It was generally believed that the access point to WikiLeaks or Julian Assange would be Roger Stone,” Bannon said in prior grand jury testimony read in court on Friday. Bannon appeared under subpoena and said he would not have agreed to testify otherwise.

On October 3, 2016, when Assange held a strange press conference that failed to live up to expectations of dramatic revelations about Hillary Clinton, Bannon emailed Stone to ask: “What was that?”

Four days later, when WikiLeaks began publishing emails hacked from Clinton campaign chair John Podesta, Bannon, according to his testimony, “heard that Roger Stone was somehow involved in the release of those emails.” Bannon said he didn’t recall where he heard that.

Shortly after WikiLeaks released the emails, Alexandra Preate, a Trump campaign aide who worked for Bannon, texted Stone a two-word message: “well done,” according to evidence presented earlier in the trial.

Bannon’s testimony is bad news for Stone, who faces charges that he lied about several topics in 2017 testimony before the House Intelligence Committee. One of those alleged lies was Stone’s claim that he did not communicate with the Trump campaign regarding information Stone claimed to have about WikiLeaks. Bannon’s testimony could bolster the government’s case that Stone committed perjury.

But the testimony is also terrible news for Trump. Previously, prosecutors revealed that Stone and Trump spoke frequently during the 2016 campaign. Those include calls on June 14, 2016, the same day the Washington Post reported that the DNC had been hacked by Russia. On July 31, 2016—not long after WikiLeaks released thousands of DNC emails and documents stolen by the Russians, Stone spoke for about 10 minutes with Trump. Prosecutors don’t know what the men discussed in either call, but they implied that they believe the topic was the hacked emails.

In written answers to special counsel Robert Mueller, Trump stated, “I do not recall discussing WikiLeaks with [Stone], nor do I recall being aware of Mr. Stone having discussed WikiLeaks with individuals associated with my campaign.” Trump may have avoid perjury by claiming a memory lapse, but the Stone case is making it hard to avoid concluding that Trump probably told a whopper to Mueller.

Prosecutors have also detailed contacts related to WikiLeaks between Stone and former Trump campaign chair Paul Manafort and Blackwater founder Erik Prince, a Trump campaign adviser. Stone now denies that he really had any inside information on WikiLeaks, and there’s no evidence he communicated directly with Assange. But multiple members of the Trump campaign apparently thought he was working with WikiLeaks to advance their cause. That sounds like attempted collusion.