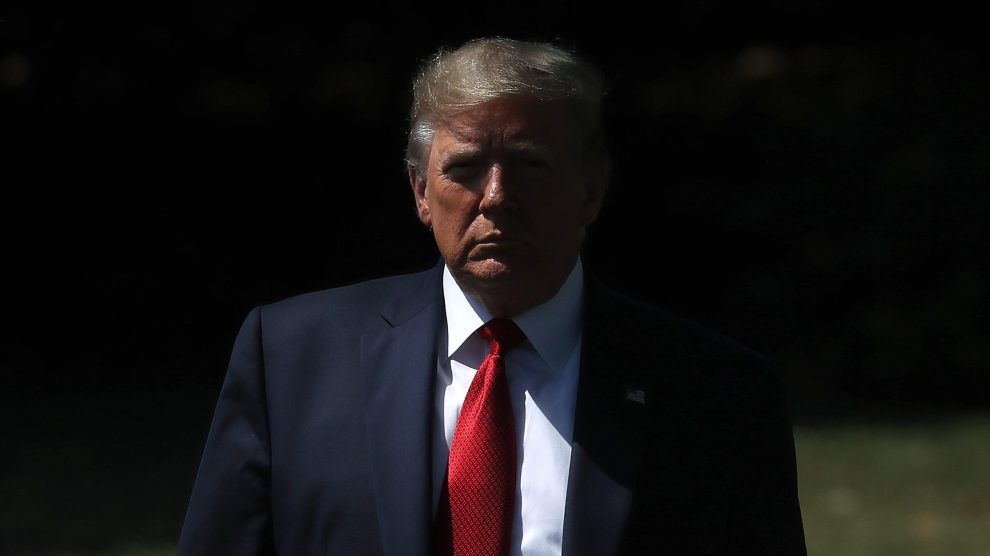 President Donald Trump has stoked much controversy and chaos this summer. News coverage has swirled around everything from his racist rants against Democratic congresswomen, to him calling the Federal Reserve chairperson he appointed an “enemy” of the United States, to him once again downplaying white supremacist terror—this time after a mass murder by a gunman who explicitly cited the type of migrant “invasion” Trump has long alleged.

Other disturbing conduct by Trump has drawn less notice, however, particularly his intensifying attacks on journalists and news organizations, which he has pursued throughout the other mayhem. By now, the country is used to Trump’s “fake news” and “enemy of the people” rhetoric. The constant repetition of those messages is no accident: His overarching goal is to try to discredit the press and reduce the impact of reporting that exposes his administration’s lies, negligence, and failures and his own possible criminality.

Trump’s incessant war on the American press has grown more extreme as his presidency has gone on, and recently that pattern has further escalated. Not only has Trump continued to smear journalists with ugly hyperbole—despite clear evidence his words have provoked violent threats against Americans working in newsrooms—he is now also seeking to whip up a conspiracy theory about the Democratic Party and the news media and position the press as a scapegoat for a potential economic recession.

The president inveighed against journalists as “degenerate Trump haters,” using a label that historically has connotations of eugenics and Nazi propaganda.

In early July, the president inveighed against NBC and MSNBC journalists as “degenerate Trump haters,” using a label that historically has connotations of eugenics and Nazi propaganda. (Previously, Trump used “degenerate” to refer to ISIS terrorists, but also Washington Post reporter Carl Bernstein.) As outrage blew up later in the month over Trump’s attacks on Rep. Ilhan Omar of Minnesota and other Democratic women of color in Congress, the president blasted the “crazed” news media and claimed it had “either officially or unofficially become a part of the Radical Left Democrat Party.” He called it “a sick partnership.”

“The Mainstream Media is out of control,” Trump fumed on Twitter a few days later, specifically targeting “The Amazon Washington Post” for its coverage of his battle with Omar and others. “They constantly lie and cheat in order to get their Radical Left Democrat views out their [sic] for all to see. It has never been this bad. They have gone bonkers, & no longer care what is right or wrong. This large scale false reporting is sick!”

After a major report exposed appalling conditions at a migrant detention center near the US-Mexico border, Trump unleashed on the press corps on the White House lawn. “The New York Times is a very dishonest newspaper,” he said, adding “what they do is a tremendous disservice to this country. They are truly the enemy of the people, I’ll tell you that. They are the enemy of the people.” A couple of days later, he berated reporters personally during a press gaggle broadcast on national television.

During several days in July when Trump went after the African American chairman of the House Oversight Committee—including calling Rep. Elijah Cummings’ Baltimore district a “rat and rodent infested mess”—Trump reiterated that the Democrats “have the Fake News Media in their pocket!” And when a new Quinnipiac poll showed that 80 percent of African Americans considered Trump a racist, he blamed the poll results on the media: “You know why?” he sneered at a female White House reporter who asked him about the survey. “Because the fake news doesn’t report it properly. People like you.”

Trump got plenty of backing for his bogus conspiracy theory on the economy from Sean Hannity, Lou Dobbs, and other Fox News pundits.

August brought mass shootings, warning signs that the US economy was faltering, and more invective from Trump. “Never has the press been more inaccurate, unfair or corrupt!” he tweeted in the wake of the gun rampages in Gilroy, Dayton, and El Paso, after sharp criticism of how he handled visits with hospitalized victims and local officials. “We are not fighting the Democrats, they are easy, we are fighting the seriously dishonest and unhinged Lamestream Media. They have gone totally CRAZY.”

As Trump appeared to grow concerned about the future of the US economy, he opened up a new front. “The Fake News Media is doing everything they can to crash the economy because they think that will be bad for me and my re-election,” he claimed, without presenting any evidence of such a conspiracy. He began repeating the attack, falsely declaring that journalists were “doing everything possible” to cause a downturn. “They would be willing to hurt many people, but that doesn’t matter to them,” he added.

The Fake News LameStream Media is doing everything possible the “create” a U.S. recession, even though the numbers & facts are working totally in the opposite direction. They would be willing to hurt many people, but that doesn’t matter to them. Our Economy is sooo strong, sorry!

Trump got plenty of backing for this bogus claim from Sean Hannity, Lou Dobbs, and other Fox News pundits. Democrats and “the media mob” were now “trying to talk the US into an economic recession,” Hannity said on his primetime show. “They want people to suffer. Why? So they can get back power and President Trump will lose the election. You know what? It doesn’t get any sicker than what these people are doing.”

Meanwhile, the New York Times reported this week that opposition researchers closely connected to the Trump family are aggressively targeting journalists whose reporting they deem hostile to the president, with the goal of embarrassing them and causing a chilling effect, if not destroying their careers.

Since this Monday alone, the president has lashed out at the press more than a dozen times, again declaring the media “totally out of control” and repeatedly calling it “fake and corrupt.” He has even stepped up some selective criticism of Fox News, complaining about their coverage of the Democratic primaries and stating, remarkably, that the network “isn’t working for us anymore.”

There has never been a time in the history of our Country that the Media was so Fraudulent, Fake, or Corrupt! When the “Age of Trump” is looked back on many years from now, I only hope that a big part of my legacy will be the exposing of massive dishonesty in the Fake News!

But the bad news in all this may be for Trump himself. While collectively these tactics represent an inherently dangerous attack on a pillar of our constitutional democracy, Trump’s multiyear campaign against the press appears to have been no more successful a project than, say, Trump Tower Moscow. One recent poll showed that although half of Trump’s base said they thought the press was “the enemy of the people,” two thirds of all respondents agreed “news media is an important part of a democracy.” Last October, an annual media survey conducted by Gallup since the 1970s found that public trust in the media rose steadily in the two years since Trump became president. And another poll last fall, from Quinnipiac, found that by a big margin American voters trusted the news media more than Trump “to tell the truth about important issues.” While those results fell starkly along partisan lines, independent and women voters sided heavily with the media.

Trump’s scorched-earth approach, in other words, may ultimately be failing. If that’s the case, he might simply resort to nonsensically blaming journalists.

“The Media is destroying the Free Press!” he tweeted late this month, echoing one of his favorite right-wing radio hosts. “So True!”