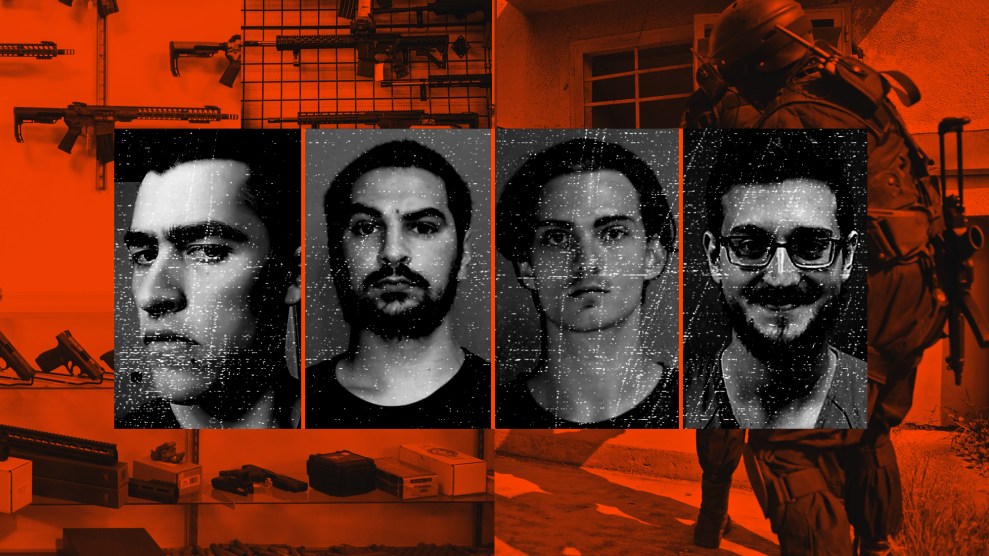 In the two weeks since the gun massacre in El Paso, Texas, federal and local authorities have thwarted four additional threats they said could have resulted in mass attacks. All four of the alleged plotters—in Nevada, Connecticut, Florida, and Ohio—were heavily armed young white men. At least three of the four appear to have harbored hateful far-right views, especially toward Jewish, African American, and LGBTQ people.

This latest wave of threats suggests an escalating danger: According to a recent Mother Jones investigation, in the past 10 months alone there have been at least six deadly gun rampages across the United States linked to far-right views, including the attack in El Paso, the massacre at the Tree of Life synagogue in Pittsburgh, and a lethal shooting at the Chabad of Poway synagogue near San Diego. As I also reported recently, law enforcement agencies at all levels have seen a surge in violent plots and threats during Donald Trump’s presidency, the majority of them marked by white supremacist ideology and other strains of far-right extremism. As one veteran US law enforcement agent with expertise in domestic attacks described the trend to me, “This is as active as I’ve seen it in a long time.”

On August 9, federal prosecutors charged Conor Climo, a 23-year-old Las Vegas man, for allegedly planning to attack a local synagogue and a bar he believed to be popular with LGBTQ people. Climo reportedly admitted during questioning by the FBI that he belonged to a neo-Nazi group; law enforcement agents seized weapons from his home including bomb-making materials and an unregistered AR-15 semiautomatic rifle.

On August 15, the FBI and police in Connecticut arrested 22-year-old Brandon Wagshol, acting on social media content in which he allegedly expressed interest in committing a mass shooting. Law enforcement seized firearms, ammunition, body armor and other tactical gear from his home and charged him with illegally possessing high-capacity magazines. According to reporting from Talking Points Memo, social media accounts apparently belonging to Wagshol included posts where he embraced Trump’s anti-immigrant rhetoric and expressed hatred of minority groups: “I support transgenders’ rights to be some of the first in the gas chambers,” one tweet said.

The country is “on a worrisome path,” said a former senior US law enforcement official. “The problem of course predates Trump and goes beyond him, but there’s little doubt he has been fanning the flames.”

On August 17, 20-year-old James P. Reardon was arrested in Ohio, for allegedly targeting a synagogue. Reardon reportedly posted a video of himself firing a gun, with the sound of sirens and screams in the background; the video was tagged with the location of the Jewish Community Center of Youngstown and a caption reading: “Police identified the Youngstown Jewish Family Community shooter as local white nationalist Seamus O’Rearedon”—an apparent variation on Reardon’s name. He had a stockpile of firearms, according to authorities, and a history of identifying as a white supremacist, including attending the infamous Unite the Right rally that turned deadly two years ago in Charlottesville, Virginia.

In a fourth case, the arrest on August 16 in Florida of 25-year-old Tristan S. Wix, there appears to be no public evidence to date linking the suspect to far-right views. But according to local authorities, Wix expressed suicidal thoughts in a text message to a girlfriend and spoke about his desire to carry out a mass shooting on a public crowd. “A good 100 kills would be nice,” he said in one message, and stated in another that he wanted his attack to “break a world record.” Police found a hunting rifle and 400 rounds of ammunition in his apartment.

In recent conversations with multiple law enforcement and security experts, I’ve heard growing consensus—and alarm—about the threat from far-right extremism. The country is “on a worrisome path,” said one former senior US law enforcement official, pointing in part to rhetoric echoing the president’s seen in recent attacks and threat cases. “The problem of course predates Trump and goes beyond him, but there’s little doubt he has been fanning the flames.” A growing body of evidence also suggests that the number of copycat mass-shooting plots has continued to rise.

At least three of the four recent arrests originated with tips from concerned people around the suspects. That may be a promising sign as the public becomes more aware of a rising danger: the convergence of mass attacks and online radicalization. Public engagement is a crucial factor for the emerging field of behavioral threat assessment, where mental health and law enforcement leaders work together to intervene with potentially dangerous people before they carry out violent attacks.

It is unclear whether the flurry of arrests means that combatting far-right domestic terror has become more of a priority for some government authorities. But all signs suggest it is not one for the Trump White House. Asked after the recent massacre at mosques in New Zealand whether he thought violent white supremacy was a growing threat, Trump replied: “I don’t really. I think it’s a small group of people that have very, very serious problems. It’s certainly a terrible thing.” In the aftermath of El Paso, Trump said he was “concerned” and disliked “any group of hate”—echoing the widely condemned equivocation he offered after Charlottesville and falsely implying that the violent anti-fascist movement known as Antifa was also responsible for mass killings.

CNN reported recently that Trump White House officials have long worked against efforts by leaders at the Department of Homeland Security to focus more on far-right terror. And last year, a spokesperson for Democratic Sen. Mark Warner, the ranking member of the Senate intelligence committee, told me that Warner had received “no indication or communication from the administration to demonstrate that they have so much as lifted a finger” to confront the problem.

Since he became president, Trump and his advisors have accumulated a record of downplaying and distorting facts about white supremacist violence, including falsely suggesting that the problem is “fake news.” As for the latest alleged plots stopped by authorities, so far the Trump White House has said nothing at all.