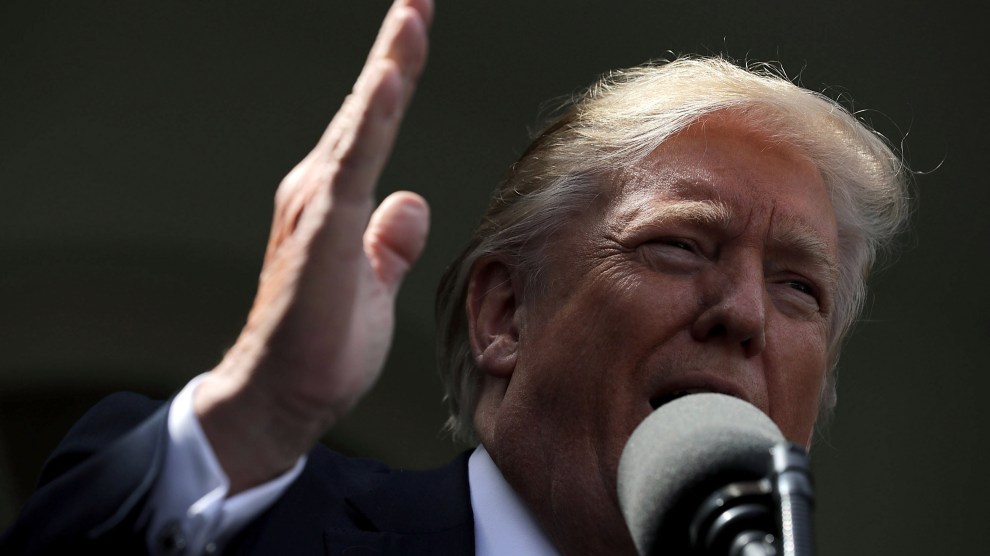 In recent months, the steady stream became a deluge.

Although Washington Post journalists and other fact-checkers have dutifully documented President Donald Trump’s now more than 5,000 misleading statements and outright lies, the American public may no longer pay much attention to the exhausting flood of misinformation. Now, a book-length study from the nonpartisan RAND Corporation warns that a growing disregard for basic facts could have dire longterm consequences for American democracy.

From June through August, Trump averaged more than 15 bogus statements a day—more than triple his daily rate in 2017. Recently, he went after Google, falsely claiming the country’s biggest information search tool is “rigged” to make him look bad. He sowed confusion over a key statement he made about the Russia investigation by falsely accusing NBC News of doctoring video of his famous interview with Lester Holt (which has been publicly available in full since May 2017). And in his startling rebuke of an official government-commissioned report concluding that 2,975 people in Puerto Rico died in the aftermath of Hurricane Maria, Trump falsely claimed that the report was a Democratic hit job and that the toll “did not go up by much” beyond 6 to 18 deaths.

This unprecedented behavior from a US president is akin to dumping gasoline on a long-smoldering trend RAND researchers call “Truth Decay”: a deepening disagreement over basic facts that is increasingly undercutting the fundamentals of our democracy, from elections to policymaking. When Trump’s personal lawyer makes the argument that “truth isn’t truth” in Robert Mueller’s investigation, or argues that “facts develop” to explain away a shifting story about the infamous 2016 Trump Tower meeting, this misinformation coming from the highest levels of the US government fuels blind partisanship. And it could potentially leave the public confused and mistrustful during crucial times, from national votes to a national security crisis.

“When we have objective facts that can be verified, or science where there’s a great deal of evidence supported by data, there isn’t an alternative version and facts don’t ‘develop,’ ” says Jennifer Kavanagh, co-author of the RAND report. Trump is ultimately a symptom of a longer-term problem that RAND studied across the political spectrum. The phenomenon grew larger with the rise of social media, but it began stirring and has gone largely unchecked since the early 2000s, she says. The purpose of the RAND report is to better identify the problem and lay groundwork for confronting it. Kavanagh warns: “We should expect truth decay to get worse if we do nothing about it.”

Cranking up the “firehose of falsehood”

A year ago, when Trump was averaging around 4.6 false statements a day, a Mother Jones analysis showed how his ongoing information warfare tracked closely with another RAND study—on propaganda strategies used in Russia under Vladimir Putin. That 2016 RAND study, “Firehose of Falsehood,” detailed four key characteristics, all of which Trump continues to demonstrate:

“High-volume and multi-channel”: From June to the end of August, Trump made 1,451 false and misleading statements in tweets, at news conferences, and at campaign rallies, according to the Washington Post. On September 7 alone, the Post counted 125 false claims—a new single-day record.

“Rapid, continuous and repetitive”:  The president frequently repeats false claims, particularly regarding the economy and immigration:

“Lacks commitment to objective reality”: When Customs & Border Patrol began separating more than 2,000 children from their immigrant parents at the southwest border last spring, Trump pushed seemingly explosive numbers to justify the new policy: “There’s been a 325 percent increase in minors, and a 435 percent increase in the smuggling or attempted smuggling of families and minors into our country.” That was highly misleading: federal data show that illegal border crossings are near the lowest levels in four decades.

“Lacks commitment to consistency”: As national outcry over the family-separations policy grew this summer, the president and other administration officials changed their story on the nature of the policy 14 times before Trump signed an executive order ending it.

Immigration—Trump’s signature issue as he sought the presidency—is also one of the topics he lies about the most, accounting for at least 610 of the more than 5,000 recorded in the Post’s database so far. Kavanagh sees this divisive issue as revealing of how truth decay corrodes American political discourse. One stark example of how agreement on fundamental fact has been lost: Gallup reports that almost half of Americans believe immigrants make crime worse, despite research showing that crime stays stable or falls in areas that have growing immigrant populations.

And data from the Chicago Council of Global Affairs show that over the past decade and a half, the divide between Democrats and Republicans on the issue of illegal immigration has widened dramatically. Now, Kavanagh says, “each side calls on their own version of the facts.”

Social media—exploited by Trump, Russian trolls and many others to spread bogus claims and content—has created a historically fertile environment for truth decay. For example, an anti-immigrant meme with the headline “Facts!” has been circulating for years, spreading lies about the number of illegal immigrants who receive food stamps, welfare and health benefits—despite efforts to quash it. PolitiFact first debunked the meme in 2012, but as it continued to circulate this summer, fact-checkers were compelled to dissect it again. Not only does “false information disseminate quickly and easily,” Kavanagh says, but “once it’s online, it lives there in perpetuity.”

Three of the lies in the anti-immigrant meme prey on fears about crime—a theme Trump returns to repeatedly in his false statements.

The American news media long ago helped to set the stage for Trump’s demagoguery on immigration. A University of Southern California study published in 2009 found that over a 27-year period, up to 86 percent of the stories in mainstream news sources focused on illegality, even though unauthorized immigrants had never made up more than a third of the foreign-born population. “This pattern of coverage would logically cause the public and policymakers to associate the influx of the foreign born with violations of the law, disruption of social norms and government failures,” the USC report said.

As truth decay deepens now, it creates opportunities for foreign actors to exacerbate the problem. Special counsel Robert Mueller’s February indictment of Russians connected to the Internet Research Agency “troll factory” identified a Russian-operated Facebook page called “Secured Borders”: The IRA trolls posed as an American activist group and called immigrants “freeloaders” and “scum,” while praising Trump’s stance on immigration. The page had more than 133,000 followers when it was shut down, according to the New York Times. Kavanagh notes that “the Russians don’t care what our immigration policy is. They do care that it causes division.”

The consequences: political paralysis and uncertainty

In the battle over the call to “Abolish ICE,” some Republicans have pinned that slogan on Democrats critical of immigration policy regardless of whether those Dems actually support eliminating the Immigration and Customs Enforcement agency. And Trump returns again and again to his lie that “Democrats want to open borders, which really equals allowing into our country massive amounts of crime,” even though Democrats regularly advocate for border-security legislation—just not “the wall” that the president wants. “Those two sides—‘Abolish ICE’ and ‘zero tolerance’—aren’t even close,” Kavanagh says. “If these are the positions, how do we even have the conversation?”

“Those two sides—‘Abolish ICE’ and ‘zero tolerance’—aren’t even close. If these are the positions, how do we even have the conversation?”

This is a road to political paralysis. The RAND report points out that the percentage of proposed bills that have been enacted in Congress have fallen consistently since 2003; even in a Republican-controlled Congress, the House failed twice in June to pass bills on immigration. In this environment, attempts at compromise routinely fail. Earlier this year, Senate Minority Leader Charles Schumer briefly offered to negotiate plans for the border wall Trump wants in exchange for protections for “Dreamers,” but the prospect of a compromise quickly fell through.

Another consequence of truth decay: paralyzing uncertainty triggered by “policy whiplash,” when changes in government bring an about-face on issues like immigration and health care. For families and businesses left in limbo, “people can’t make decisions about what they do with their lives or money,” Kavanagh says, and jobs can be threatened—as when Microsoft warned that Trump’s immigration policies might push the tech giant to move some of its work force overseas. “With such a pendulum, how can we solve anything?” Kavanagh says, noting that RAND found previous eras of truth decay contributed to national economic crises like the Depression. “There are long-term consequences of making policy without facts.”

The urgent mission to safeguard democracy

Truth decay is causing many Americans to feel so alienated that they’re abandoning their role in the political process, the RAND report warns. This summer, Pew released data showing that in the 2016 election, four out of ten eligible voters did not vote. And some groups feel more disenfranchised than others: Pew found that while overall turnout in 2016 was only slightly lower than in 2008 and similar to 2012, turnout among African-American voters dropped seven percentage points. And there were more nonvoters than voters among Latino Americans eligible to cast a ballot.

RAND considers its study on truth decay a foundation for further research on the problem, as well as possible solutions. The researchers are gathering hard data to measure the ways truth decay now pervades American society. They are also creating a database of media literacy efforts to analyze their effectiveness, and they plan to test tactics like fact-checking and counter-messaging, which could be used to stop the spread of disinformation. The goal is ultimately to produce recommendations that lawmakers, educators, journalists and others can use to take action— but the research underway won’t identify any potential strategies until the end of 2018 at the earliest.

“The hope is to find effective ways to swing back toward a fact-based political discourse,” Kavanagh says. In the meantime, Trump’s lies continue to flow, on everything from the Russia investigation and NATO spending, to the economy and immigration. And as Americans continue to bitterly disagree over what happened in the 2016 election, the next major vote looms.