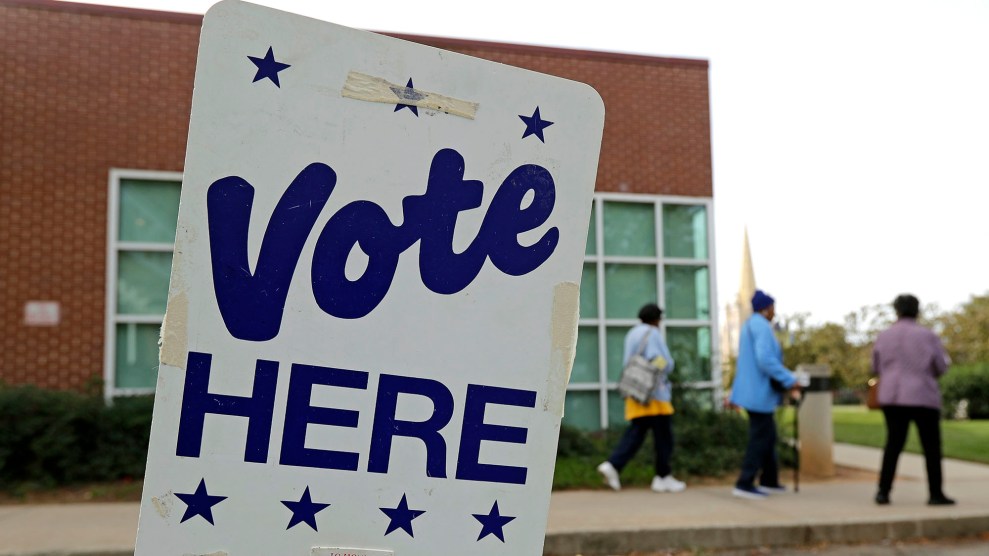 People arrive for early voting at a polling place in Charlotte, North Carolina, ahead of the 2018 midterm elections. Chuck Burton/AP

In the weeks following the midterm elections, President Donald Trump and several Republican members of Congress became obsessed with the possibility of election fraud. As a recount in Florida unfolded, Trump accused Democrats of manipulating the vote count. On Twitter, Sen. Marco Rubio (R-Fla.) spent days accusing local election officials of fraud and innocent voters of casting ballots illegally. Republican Rep. Matt Gaetz of Florida, a Trump ally, showed up at the Broward County supervisor of elections’ office during the vote-counting and, with a megaphone in hand, claimed that fraud was afoot. When the Florida election wrapped up with no actual evidence of fraud, Republicans turned their attention to California. As county election officials concluded the weekslong vote-counting process, during which multiple Democrats pulled ahead of their Republican opponents, House Speaker Paul Ryan questioned the integrity of California’s voting system.

But there is one place where there is a strong possibility of fraud in the 2018 midterms, and so far, none of these Republicans have mentioned it. In North Carolina’s 9th Congressional District, the state election board has refused to certify the results of the election as it investigates the possibility that fraud helped Republican Mark Harris defeat Democrat Dan McCready by 905 votes out of more than 280,000 cast.

Thus far, there is evidence of tampering with absentee ballots in Bladen County, a large rural county in the southeast corner of the state. One woman recounted in a sworn affidavit that a woman had collected her absentee ballot before it was sealed in its envelope; another voter also recalled in an affidavit a woman picking up her ballot. In North Carolina, it is illegal for anyone but the voter to turn in his or her absentee ballot. Some affidavits fingered a local Republican operator, Leslie McCrae Dowless Jr., who worked on behalf of the Harris campaign, according to the Charlotte Observer. The Washington Post reported Monday that according to one sworn affidavit from a former friend of Dowless, “he oversaw a crew of workers who collected absentee ballots from voters and updated the Harris campaign on the numbers.”

One witness claims to have overheard someone saying Dowless would get a $40,000 bonus if Harris won.

Another witness claims Dowless told him he doesn't do checks, just cash pic.twitter.com/C8FJbt014a

Thus far, these allegations are unproven. But the overall returns in Bladen County indicate something out of the ordinary may have occurred. Michael Bitzer, a politics professor at nearby Catawba College, analyzed the absentee ballot returns and found that Harris had won an improbable percentage of the mail-in vote in Bladen County. Registered Republicans submitted just 19 percent of absentee ballots that were accepted by the county, compared with 42 percent for Democrats and 39 percent for unaffiliated voters. Yet Harris won 61 percent of mail-in ballots in the county. In every other county in the district, McCready won the absentee ballot vote by a wide margin. For those results to be accurate, Harris would have had to win every Republican and independent mail-in vote along with many Democratic votes.

There’s also a potentially suspicious number of absentee ballots listed as unreturned, particularly from voters of color. The News & Observer did an analysis of the absentee ballot results in Bladen County and neighboring Robeson County and found that a significant number of voters had failed to return their absentee ballots. In Robeson County, a disproportionate number of minority voters had not returned their ballots. “But in Robeson County, 75 percent of the mail-in ballots requested by African Americans and 69 percent of the mail-in ballots requested by American Indians were listed as unreturned,” the paper found. Investigators with the state elections board have identified hundreds of potential witnesses, including many whose absentee ballots were never turned in, the Post reported.

The conservative activists who have most vocally pushed a narrative of rampant voter fraud in recent years are ignoring the unfolding drama in North Carolina. J. Christian Adams, a former Justice Department attorney who is being sued after issuing a report filled with inaccurate allegations of felony voter fraud against residents of Virginia, has not mentioned it on social media, despite being a frequent blogger and tweeter. Nor have Kansas Secretary of State Kris Kobach and conservative voter-ID evangelist Hans von Spakovsky, who along with Adams were members of Trump’s Election Integrity Commission last year. Before Trump dissolved the commission in January amid a barrage of lawsuits, the group’s conservative members planned to issue a report that would document voter fraud, even before they appeared to have found any evidence.

Harris and the chair of the North Carolina Republican Party, Dallas Woodhouse, have both called for the State Board of Elections and Ethics to certify the election. They both say they support an investigation into potential fraud, but they deny that there is evidence that it affected the outcome. In the meantime, Harris participated in an orientation for new GOP members of Congress in Washington and entered a lottery to determine the order for selecting a Capitol Hill office.

But number crunchers believe that the number of votes in doubt is greater than Harris’ slim margin.

This is simply not true; there ARE enough ballots in question in NC-9 to potentially affect the outcome. https://t.co/B6p9O7XEFr

Irregularities in the November vote have sparked an investigation into the Republican primary for the seat as well. As The New Yorker reports, Harris defeated the GOP incumbent, Robert Pittenger, in May by 828 votes—including 96 percent of the mail-in votes in Bladen County.

North Carolina Republicans have long claimed a fear of voter fraud. In 2013, Republicans there passed one of the nation’s strictest voter ID laws, ostensibly to combat voter fraud, despite a lack of evidence of in-person fraud. (Evidence suggests the incidence of in-person voter fraud is about 31 per 1 billion ballots cast.) “The mere thought that someone can simply walk into a voting booth and cast a vote on behalf of someone else fosters the perception that our electoral system lacks integrity,” the state House speaker who shepherded the bill through the Legislature, Thom Tillis, said in 2016 in defense of the law. The law was struck down that year for targeting voting African Americans with what the judge called “almost surgical precision.”

Tillis, who was elected to the US Senate in 2014, has not commented on the situation unfolding in his home state. His communications director did not respond to a request for comment. Ryan’s spokeswoman in Washington, AshLee Strong, referred Mother Jones to the spokesman for one of Ryan’s fundraising vehicles, a political committee called Team Ryan, who did not respond.