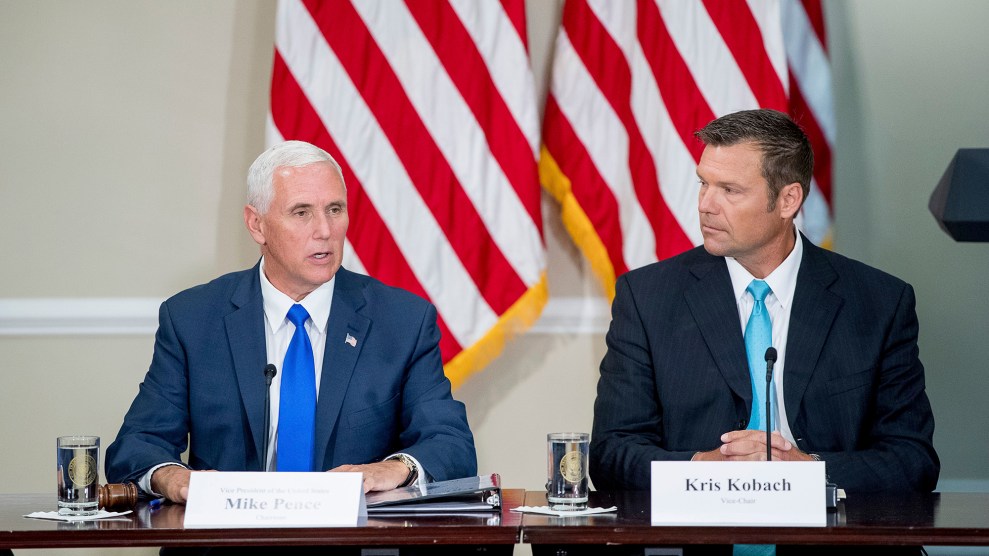 Vice President Mike Pence and Kansas Secretary of State Kris Kobach at the first meeting of the Presidential Advisory Commission on Election Integrity in July of 2017. Andrew Harnik/AP, File

President Donald Trump’s election integrity commission intended to trumpet findings of voter fraud before it had found evidence to back up its claims, according to documents and a letter from a commission member released Friday.

Voting rights advocates feared that the commission, led by Kansas Secretary of State Kris Kobach, one of the leading Republican crusaders for tighter voting controls, would sound the alarm about voter fraud in order to pass new voting restrictions. The new documents show just that: A small group of commissioners was looking for evidence to back up its conclusions, rather than the other way around, while keeping the other panel members in the dark about its work.

Trump disbanded the commission in January as it faced a bevy of lawsuits from voting rights and government watchdog groups. One of those lawsuits came from one of the panel’s own members, Maine Secretary of State Matthew Dunlap. A Democrat, Dunlap came to believe that he was being excluded from the work of the commission, which he suspected was being conducted almost entirely by Kobach and a handful of other conservative voter fraud alarmists on the panel. Last November, Dunlap sued the commission for the materials that had not been shared with him. A federal judge ordered the government in Juneto turn over those records, even though the commission had ceased to operate. The government handed over more than 1,800 documents on July 18, and on Friday, Dunlap made them public.

“Contrary to what we were promised, these documents show that there was, in fact, a pre-ordained outcome to this commission to demonstrate widespread voter fraud, without any evidence to back it up,” Dunlap said in a statement Friday.

Among the documents turned over to Dunlap were outlines and a draft of a report to be issued by the commission. The draft, dated November 2017, included headings for evidence of “improper voter registration practices,” “instances of fraudulent or improper voting,” “instances of other election crimes” and “voter suppression.” But there was no evidence below these headings and sub-headings. “That the Commission predicted it would find widespread evidence of fraud actually reveals a troubling bias,” Dunlap wrote in a letter to Kobach and Vice President Mike Pence, the chair of the commission, that he also released Friday. “While individual cases of improper or fraudulent voting occur infrequently, the instances of which I am aware do not provide any basis to extrapolate widespread of systematic problems. The plural of anecdote is not data.”

In his letter, Dunlap highlighted other troubling activity going on among a small number of commissioners. The commission’s first official act last June was to demand extensive personal information about every voter in the country—from their names and addresses to the last four digits of their Social Security numbers—a request that raised fears that the commission would put people’s privacy in danger and create a faulty database to try to prove voter fraud. On Friday, Dunlap revealed that Kobach and two other commissioners considered requesting additional information federal court clerks, including “lists of individuals deemed ineligible or excused from federal jury service due to death, relocation, convictions, or lack of citizenship.” The draft of one such request to a clerk in San Diego, which was never sent, asked for the names, addresses, and “other identifying information” of individuals excluded from jury duty since 2006. The commission was in the process of building a database of names and other information that, by producing false-positive matches, would create the appearance of voter fraud and illegal voter registrations where few if any actual instances likely existed. The documents show some discussion of detailing a statistician to the committee from the Voting Section of the Justice Department to analyze the voter registration and other data collected by the commission.

The documents also revealed that the commission’s report was planning to promote use of the Interstate Crosscheck Program, a system that he created and is overseen by his office in Kansas. In an email to the commission’s executive director last July, Kobach indicated that he would share the Crosscheck program with the White House as well as the commission. It is unclear whether the program would be made available for commissioners to inspect or in order to somehow use it in the course of its work. The programcompares state registration lists in order to identify duplicate registrations and potentially fraudulent activity. But Crosscheck has an abysmal track record. Academics at Harvard, Yale, Stanford, and the University of Pennsylvania found that Crosscheck produces false matches 99 percent of the time, and that for every fraudulent vote stopped, it would impede 2,000 eligible voters from casting a ballot. Yet Kobach has called it a model for the nation.

Kobach is a Republican candidate for governor in Kansas. His primary is on Tuesday.