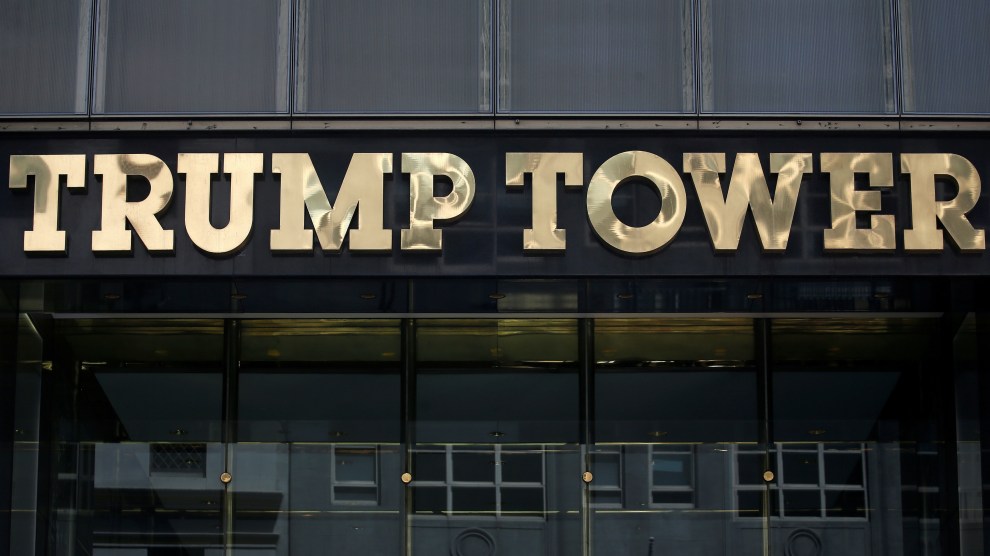 The entrance to Trump Tower.Carlo Allegri/Reuters via ZUMA Press.

The week after Donald Trump’s inauguration, as questions swirled about the ethics ramifications of his refusal to divest from his business holdings, the Trump Organization announced that it had created a system for vetting new deals that could benefit the president. The company said it had tapped George Sorial, a Trump Organization executive, to be chief compliance counsel and Bobby Burchfield, a Washington-based corporate lawyer, to serve as an outside ethics adviser who would scrutinize new Trump company transactions for potential conflicts of interest. Trump’s private lawyer, Sheri Dillon, had pledged in early January that Trump would “build in protections” to assure Americans that his actions as president “are for their benefit and not to support his financial interests.” But two months into Trump’s presidency, there are serious questions about the rigor and transparency of the Trump Organization’s vetting process.

The first deal completed after Trump’s swearing-in suggested the vetting procedures are weak. This transaction, as Mother Jones reported, was the sale of a $15.8 million condo to a Chinese American businesswoman who peddles access to Chinese elites and who has ties to a front group established by China’s military intelligence apparatus. Angela Chen’s connections to Chinese officials and military intelligence evidently weren’t a cause for concern to the Trump Organization. The condo sale went through on February 21, with Chen apparently paying the $15.8 million in cash—roughly $2 million more than a unit one floor below. (Chen had lived in the same Trump-owned Park Avenue building in a smaller apartment for years. Jared Kushner and Ivanka Trump lived in the same building before their move to Washington.) Contacted by Mother Jones earlier this month, Burchfield, the Trump Organization’s outside ethics adviser, declined to comment on the sale or how it was vetted.

Robert Weissman, president of the good-government group Public Citizen, says the Chen deal raises questions about whether any real vetting happened. “Here, where we actually need extreme vetting, it appears to be absent,” he says. “It’s absolutely unclear if Burchfield or anybody else is doing anything pursuant to what they alleged they would do. And if they are, we don’t know what it is. But we should not presume it’s happening.”

On Thursday, Burchfield, a veteran corporate litigator who specializes in political law and largely represents Republican clients, declined to comment regarding the vetting process for new Trump deals. He would not talk about any transactions approved or denied since he began advising the Trump Organization. At Trump’s January 11 press conference, Dillon promised that the outside ethics adviser would provide “written approval” of any new deal, ostensibly explaining why a transaction does not pose a conflict for the president. Burchfield has not publicly disclosed details about the written approval process.

The Trump Organization has faced numerous questions about its vetting of potential business partners prior to Trump’s election. A recent investigation by The New Yorker found that Trump’s company had potentially violated the Foreign Corrupt Practices Act when it entered into a partnership in 2012 with an oligarch in Azerbaijan to build a Trump-branded property in Baku, the country’s capital. The Azeri oligarch’s family was widely viewed as corrupt and had ties to Iran’s Revolutionary Guard. But a lawyer for the Trump Organization told The New Yorker that the company had vetted the Azeri partners and did not uncover cause for concern. (The Trump Organization exited the partnership last December.)

In December, after years of development, Trump also abandoned a deal for a Trump hotel in Brazil after investigators in that country opened a criminal bribery investigation of his Brazilian partners and the hotel’s financing. (As with the Azerbaijan project, Trump did not develop or finance the building. He licensed his name and agreed to manage the hotel.) Brazilian investigators expressed skepticism over the level of due diligence performed by the Trump Organization related to these partners. “It’s curious that the Trumps didn’t seem to know that their biggest deal in Brazil was bankrolled by shady investors,” one Brazilian legislator told Bloomberg.

To some ethics experts, lax vetting has been a recurring theme for Trump and his company. “The Trump Organization, in deals that I’ve seen so far, they either never do due diligence, or they do due diligence and they don’t care,” says Jessica Tillipman, a law professor at George Washington University who specializes in anti-corruption and ethics practices. (Trump Organization officials did not respond to a request for comment.)

Regarding the recent Trump Park Avenue condo sale, Tillipman says the most basic due diligence research should have red-flagged that Chen was involved with an organization that was founded and led by members of the Chinese ruling elite and that had ties to a Chinese governmental group. (Mother Jones discovered Chen’s links to the Chinese Association for International Friendly Contacts, described by experts as a military intelligence front group, by watching a video that was posted on the website of Chen’s nonprofit, the China Arts Foundation.)

“Hypothetically, if they cared about this, they would be concerned they were involved with a business transaction with someone who could endanger national security interests,” Tillipman says.

If Trump’s sons, Donald Jr. and Eric, who now run the Trump Organization, are to be believed, there are plenty more Trump-backed deals in the works—each of them a potential conflict of interest for their father. The company has signed letters of intent to build 17 new hotels around the country, properties that will be part of a new Trump Organization chain called Scion. Their company has also indicated interest in restarting a project to build new properties at a beachfront resort in the Dominican Republic. “The stars have all aligned,” Eric Trump recently told the New York Times. “I think our brand is the hottest it has ever been.”

According to property records, Trump owns 17 units in the Trump Park Avenue building, four of them penthouses. A number of these units are for sale, including a penthouse that was listed this week for $35 million. He obviously owns many more properties with units that could fetch millions. Without more details on how Trump’s executives are vetting potential deals—or confirmation that they are vetting at all—each new sale has the potential for controversy over who is putting money in the president’s pockets.