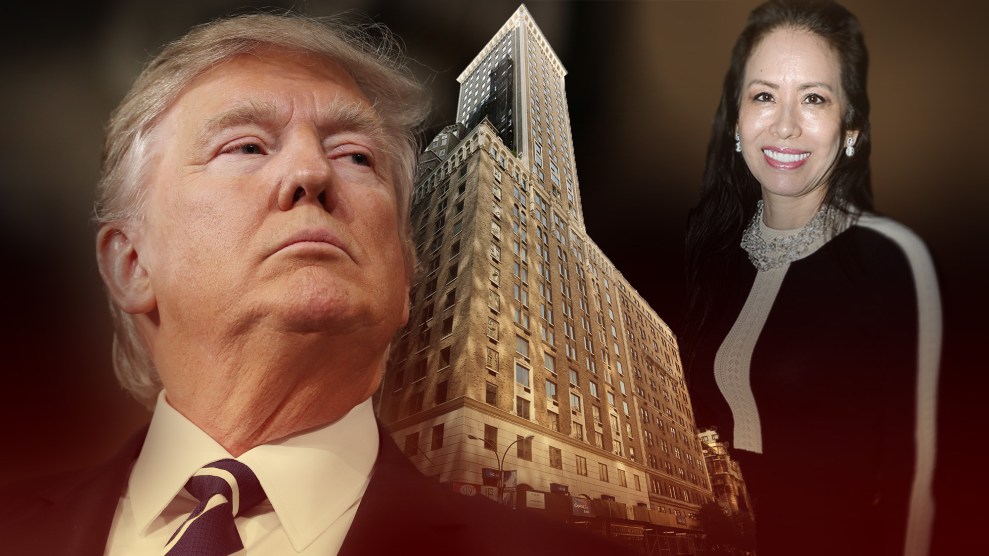 When a Chinese American businesswoman who sells access to powerful people recently purchased a $15.8 million penthouse in a building owned by President Donald Trump, the deal raised a key question. Was this a straightforward real estate transaction, or was this an effort to win favor with the new administration? The woman, Angela Chen, refused to discuss the purchase with the media. The White House and the Trump Organization would not comment on it. Further investigation by Mother Jones has unearthed a new element to the story: Chen has ties to important members of the Chinese ruling elite and to an organization considered a front group for Chinese military intelligence.

Chen, who also goes by the names Xiao Yan Chen and Chen Yu, purchased the four-bedroom condo in the Trump Park Avenue building in New York City on February 21. As Mother Jones first reported, Chen runs a business consulting firm, Global Alliance Associates, which specializes in linking US businesses seeking deals in China with the country’s top power brokers. “As counselors in consummating the right relationships—quite simply—we provide access,” Chen’s firm boasts on its website. But Chen has another job: She chairs the US arm of a nonprofit called the China Arts Foundation, which was founded in 2006 and has links with Chinese elites and the country’s military intelligence service.

The China Arts Foundation was created by Deng Rong, the youngest daughter of Deng Xiaoping, the iconic revolutionary figure and Chinese leader. Deng Rong is what’s known in China as a princeling—a term used for the sons and daughters of former high-ranking officials or officers in the Chinese Communist Party who now hold significant sway in business and political circles. Since 1990, Deng has also served as a vice president of the China Association for International Friendly Contacts, which is an affiliate of the intelligence and foreign propaganda division of the People’s Liberation Army (PLA). China experts say CAIFC exists to cultivate relationships with former leaders and retired military officials and diplomats of various countries, including the United States and the United Kingdom, in order to influence foreign defense policies toward China and the Far East.

“When, as here, the public interest is implicated, we’re left at a loss. You shouldn’t be asking these questions about a president.”

To sum up: An influence-peddler who works with a princeling tied to Chinese military intelligence placed $15.8 million in the pockets of the president of the United States.

Mark Stokes, executive director of the Project 2049 Institute, a Virginia-based think tank that focuses on national security policy with respect to Asia, says CAIFC’s leadership consists largely of retired (and some current) Chinese military and government officials. Stokes, who has written about Chinese political warfare, says CAIFC has become “an important channel of access to [Chinese Communist Party] princelings.” He adds that “by influencing perceptions” of China (especially in connection to controversial issues, such as China’s stance toward Taiwan), CAIFC hopes to “influence policies of foreign governments, particularly related to defense and national security.”

The China Arts Foundation bills itself as a promoter of cultural exchanges between the United States and China, often involving classical music. The group has a branch in New York, which is run by Angela Chen, and another in Hong Kong. Various members of China’s elite serve on the group’s board, including Wang Boming, one of the founders of China’s stock market; Hong Kong orchestra conductor Long Yu; and Marjorie Yang, a political power broker and textile magnate who’s nicknamed the “cotton princess.” (Yang is reportedly bankrolling the campaign of John Tsang, a candidate for chief executive of Hong Kong, the city’s highest office.) Li Zhaoxing, a former foreign minister, and Guo Shuqing, the chairman of China’s banking regulation commission, were named as board members in a promotional video posted on the website of the foundation’s American branch.

On Tuesday, after Mother Jones made inquiries, the website for the China Arts Foundation International went offline. (You can view an archived version of the site here.)

Angela Chen’s role with the China Arts Foundation has brought her into contact with prominent American and Chinese figures. In 2014, the foundation hosted its Chinese New Year gala at New York’s Le Cirque restaurant on behalf of Deng Rong, and the guests included billionaire Chinese real estate developer Zhang Xin, philanthropist and banker Steven Rockefeller, and Stephen Schwarzman, the billionaire investor and CEO of the Blackstone Group. The Chinese consul general in New York, Zhang Qiyue, and former US Ambassador to China Jon Huntsman attended a 2015 benefit dinner hosted by the foundation.

The promotional video indicates that there has been a working relationship between the China Arts Foundation and CAIFC. In it, Chen’s group takes credit for sponsoring numerous international summits, including a meeting of international business leaders and think tank experts called the Sanya Forum, which was organized by CAIFC. Several China experts tell Mother Jones that CAIFC engages in legitimate cultural exchange activities but that it has long been seen as part of the Chinese military intelligence apparatus. In a 2002 article published in the China Quarterly, a peer-reviewed British academic journal, George Washington University professor and China scholar David Shambaugh characterized CAIFC as an offshoot of the intelligence bureau of the People’s Liberation Army. He noted that CAIFC’s offices are located in a Beijing compound used by military units.

In 2012, the Republican National Committee considered a resolution expressing concern about a cultural exchange program organized by CAIFC because of the group’s ties to Chinese military intelligence. The resolution, which was not adopted, was fueled by a report from a congressional committee that studies US-China relations. The report labeled CAIFC “a front organization for the International Liaison Department of the People’s Liberation Army’s General Political Department.”

CAIFC has also prompted concerns at the US State Department. During Hillary Clinton’s tenure as secretary of state, an aide to Bill Clinton sought the State Department’s approval for the former president to make a November 2012 speaking appearance co-sponsored by CAIFC and the China Arts Foundation, according to government emails released through the Freedom of Information Act. An official at the State Department noted that CAIFC’s leadership included current and former Chinese government officials and wrote to Clinton’s aide, “I don’t believe we’ve approved Chinese gov’t entities in the past and so we will need to further consider this one.” In the end, Clinton’s aide told the State Department that the former president was backing out of the appearance.

In 2015, a high-ranking CAIFC official was detained as part of an anti-graft campaign by the Chinese army. A South China Morning Post story on the arrest described him as “the chief of a Chinese military intelligence agency.” The paper noted that the official “was in charge of overseas espionage and is better known to the West as the vice-chairman of the government-backed China Association for International Friendly Contact, which used to be the Department of Enemy Work.”

Chen’s purchase of the penthouse unit from Trump was the first deal consummated by Trump’s company since he became president. Prior to taking office, Trump claimed he would remove himself from the daily operations of his business empire, but he remains the owner of the limited liability company that sold Chen the unit. How the deal went down remains a mystery. Chen apparently paid cash, and the apartment she purchased, unlike other penthouse units in the Trump Park Avenue building, was not publicly listed for sale. Chen currently lives in an apartment on a lower floor of the building and uses the unit as a mailing address for the China Arts Foundation and her consulting company. Before moving to Washington, Jared Kushner and Ivanka Trump lived in the same building. (They are currently trying to sell their apartment.)

Trump Organization Chief Financial Officer Allen Weisselberg, who, along with Trump’s two adult sons, was handed the task of running Trump’s business empire while he is in the Oval Office, signed the sale documents with Chen. He did not respond to a request for comment. Chen also did not respond to multiple requests for comment about the apartment deal or her relationship with Deng Rong and CAIFC. CAIFC did not respond to an email seeking comment.

When Trump became president, the Trump Organization enlisted an ethics adviser, attorney Bobby Burchfield, to vet potential business deals involving Trump. Burchfield declined to comment about the Chen transaction or explain the vetting process for her purchase of the Trump Park Avenue penthouse.

Norm Eisen, who served as President Barack Obama’s lead ethics lawyer, says the links between Chen, the foundation, CAIFC, and the Chinese government and military raise “a series of very profound and troubling questions.” He notes that there is no transparency regarding the vetting of business deals benefiting Trump. Without such a process, he points out, there are well-founded questions about the true source of the funds used to buy the $15.8 million condo. “When, as here, the public interest is implicated, we’re left at a loss,” Eisen says. “You shouldn’t be asking these questions about a president.”