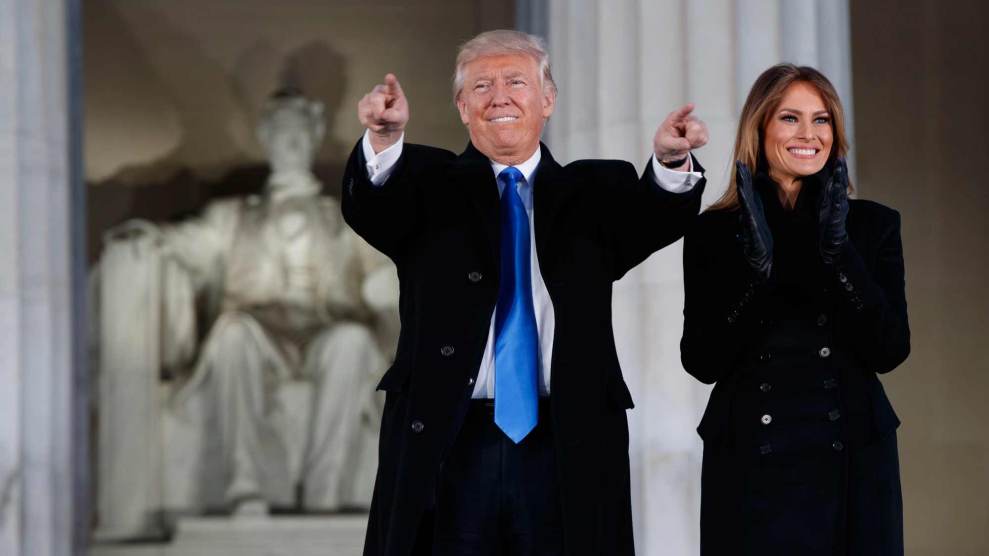 Donald Trump takes office today as the most conflicted and ethically problematic president in the nation’s history. He refuses to divest from his global business holdings. His company continues to make foreign deals even after he promised to halt them. He owes hundreds of millions of dollars to domestic and overseas banks and other financial institutions. And Trump has yet to release his tax returns, making it impossible to know the full extent of his business dealings, liabilities, and other potential conflicts in the United States and around the world.

On the first day of Trump’s presidency, here is a guide to the conflicts and ethical questions that will dog him from the moment he steps foot in the White House.

Trump’s Other Home on Pennsylvania Avenue

There was a joke during the presidential campaign: Win or lose, Trump would still have a presence on DC’s iconic Pennsylvania Avenue. The Trump International Hotel opened last year in the historic Old Post Office Building four blocks from the White House, charging $850 a night for a room and $26 for a hamburger. Trump’s unexpected victory, however, presented a new problem for the incoming president: He will violate the Trump International’s lease the moment he takes office.

Trump’s lease with the General Services Administration—the landlord of the federal government—bans any elected official, including the president, from having a financial stake in or gaining a financial benefit from the property. Congressional Democrats argue that Trump, under the terms of the lease, must legally divest himself from the 263-room hotel before taking office. If he chooses not to divest, Democrats say the GSA should evict Trump.

The conflicts here are many. Trump’s administration will oversee the GSA and handpick its leader, and the agency will in turn be tasked with negotiating with Trump Organization officials over rent, lease terms, and so on. GSA officials have hedged their comments about the fate of the hotel. The agency said in a statement in December that it “plans to coordinate with the president-elect’s team to address any issues that may be related to the Old Post Office building.” Trump’s transition team stayed mum about the lease controversy, while Trump himself has refused to cut ties with the hotel. The Trump International, meanwhile, has courted foreign dignitaries, raising questions about whether the incoming administration was pushing foreign governments to patronize the hotel. This week, Trump spokesman Sean Spicer gave a shout-out to the hotel: “It’s a stunning hotel. I encourage you to go there if you haven’t been by.”

The emoluments clause was an obscure provision of the US Constitution—until Trump arrived on the scene. The clause prohibits any government official from receiving money, gifts, or anything else of value from a foreign government. In the view of many constitutional experts, Trump stands in violation of the emoluments clause from the first day of his presidency. “Applied to Mr. Trump’s diverse dealings, the text and purpose of the Emoluments Clause speak as one: this cannot be allowed,” wrote Norm Eisen, a former chief ethics lawyer under President Barack Obama, and Richard Painter, a former chief ethics lawyer under President George W. Bush.

A foreign state-owned bank rents space in a Trump-owned building. Trump has loans via a partnership with the Bank of China. Foreign diplomats and governments are paying to stay at the Trump International Hotel in DC, which is largely owned by Trump and run by his company. And then there are the many Trump-owned and -branded hotels around the globe—deals that in some cases involve partnerships with questionable characters. (A project in Azerbaijan with the son of the country’s transportation minister is one glaring example.) All of these sources of money—and many more—run afoul of the emoluments clause, according to Eisen and Painter.

Trump has responded to questions about his conflicts with flat denials. “The law is totally on my side,” he said in late November, “meaning the president can’t have a conflict of interest.” Ethics experts say this isn’t true. In an analysis for the Brookings Institution, Eisen and Painter studied legal and historical precedent and came to the conclusion that evidence “compellingly” supports “the longstanding and near-unanimous consensus among lawyers and legal scholars that the Emoluments Clause applies in full to the President.”

At a press conference earlier this month, Trump said he was turning control of his company over to his sons and declared that the Trump Organization would pursue no new international business during his presidency. He also said the company would terminate many foreign projects (like the Azerbaijani project, which has long been dormant anyway) that the Trump Organization had in development. But just this week, one of his Scottish golf courses announced plans to expand, and Trump projects in Indonesia appear to be moving forward. While Trump bragged at the press conference about turning down a deal with Dubai-based property development company DAMAC, he did not address the fact that he has an ongoing licensing deal with the company worth between $2 million and $10 million a year.

Trump, as Mother Jones has reported, will enter the White House as the most indebted president in history. And the new president’s lenders, which include foreign financial institutions, raise a whole slew of questions.

According to Trump’s financial disclosure forms, his largest lender is Deutsche Bank, which he owes $364 million. The German bank and US law enforcement officials have sparred in recent years, with the bank agreeing to pay a $7.2 billion fine for its role in the 2008 mortgage crisis. The Justice Department has an ongoing investigation into the bank for allegedly helping funnel money out of Russia.

The fact that Trump will enter office with his biggest lender under investigation by his administration is one of the most obvious conflicts his debts pose. But there are other ethical issues: What happens if one of his lenders wants to renegotiate the loan’s terms? How can the public be sure that the bank isn’t using its leverage to curry favor or that Trump isn’t using his position to seek special treatment? Although Trump has said he is separating himself from the daily operations of his company, he has personally guaranteed a number of his loans. Will Trump recuse himself if a decision directly involving one of his lenders lands on his desk?

During his press conference earlier this month, Trump laid out his plan to insulate himself from conflicts of interest. He would place all his assets into a trust controlled by his sons, who would not discuss any of the Trump Organization’s business dealings with him. An “independent ethics adviser” would vet any new Trump Organization deals. And Trump would donate any hotel profits derived from foreign governments to the US Treasury.

Ethics experts were aghast. They had been nearly unanimous in their advice that Trump place his assets in a blind trust run by an independent trustee who oversees the assets and can sell off those that pose a conflict. Trump’s plan was so far outside the boundaries of what past presidents and Cabinet members have typically done that the usually press-shy director of the Office of Government Ethics publicly blasted the proposal. Trump’s transition team did not even consult with the OGE, according to Walter Shaub, the office’s director. “We would have told them that this arrangement fails to meet the statutory requirements,” he said.

For Trump, however, the issue appears to be settled—even if that means entering the White House as the most conflict-ridden president in US history.