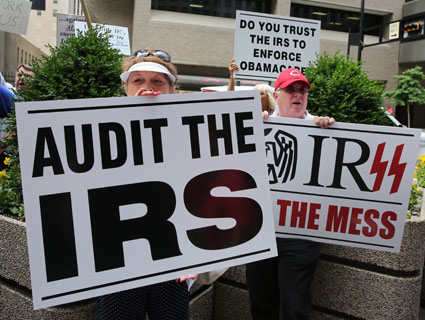 Tea party members protest in front of the John Weld Peck Federal Building in Cincinnati, Ohio, during a nationwide protest at IRS offices on May 21, 2013.Ernest Coleman/ZUMAPRESS.com

With each passing week, the Internal Revenue Service’s supposed targeting of tea party groups looks less like a scandal and more like a case of IRS staffers doing their jobs, albeit in an overzealous, at times clumsy, and narrow-minded way.

From the New York Times we now learn that IRS employees who vetted applications for tax-exempt status heavily scrutinized a Palestinian rights group, open-source software developers, and an organization trying to help musicians make money online. This comes on top of the news, as Mother Jones previously reported, that the agency also singled out for extra vetting groups with “progressive, “occupy,” and “Israel” in their name.

That sound you hear is the last gasp of the tea party targeting “scandal,” which some Republicans have tried mightily to hype into a Watergate-esque controversy. Make no mistake: As the agency subjected tea partiers and other conservative groups to an intense amount of scrutiny, it made those same groups wait for months, if not years, to learn whether they’d earned tax-exempt status. This is a big deal. Waiting around that long crimps the flow of donations that a nonprofit needs to survive. Tea partiers are right to be mad about that. But what the drip-drip of revelations in the IRS mess has shown is that it’s not fair to say just tea partiers were singled out. Other nonprofits, partisan and nonpartisan, left- and right-leaning, politically inclined and not, got a grilling by the IRS, too. They also endured long wait times.

You’ll remember that the Treasury Department inspector general report that first looked at the “targeting” of groups with “tea party” and “patriots” in their name found no evidence of political bias. At the time, Republicans in Congress didn’t buy that. Clearly, they argued, this was the work of anti-conservative IRS staffers, or a meddlesome Obama White House looking to suppress its opponents in a closely fought election year. Then we learned that the manager of the IRS Screening Office in Cincinnati, where most of the alleged targeting took place, identified himself as a “conservative Republican.” Still, Republicans forged onward.

Now, with these latest revelations, even some GOPers are coming around to the reality of what happened. From the Times:

“We haven’t proved political motivation,” said Representative Charles Boustany Jr., a Louisiana Republican who, as the chairman of the House Ways and Means Subcommittee on Oversight, is leading one inquiry.

Senator Roy Blunt, Republican of Missouri, said that in retrospect, suggestions that Mr. Obama had orchestrated an IRS attack on his political enemies were unwarranted.

“Presidents have always been very careful about maintaining the appearance of keeping hands off the IRS,” he said. “I don’t have any reason to believe there wasn’t targeting of conservatives, but it might well have been a lot more than that as well.”

So there you have it. Republicans have gone from blaming the Obama administration and IRS staffers for targeting tea partiers to double-negative-laced non-concession concessions like Roy Blunt’s. (That said, Republicans aren’t calling off the hounds quite yet: A spokeswoman for Rep. Dave Camp (R-Mich.), who chairs the House ways and means committee, says committee members will continue to “gather the facts” and “follow them wherever they lead us.”)

Questions remain about the process the IRS uses to vet nonprofit applications, and why it takes so long to respond to some nonprofits seeking tax-exempt status. The way the IRS went about scrutinizing organizations in recent years—with its “be on the lookout,” or BOLO, lists—is troublesome, which is why acting IRS commissioner Danny Werfel recently scrapped the BOLOs and pledged to reform how the IRS does its job. But as for allegations of politically motivated targeting, with all we know right now, that scandal appears to be dead.