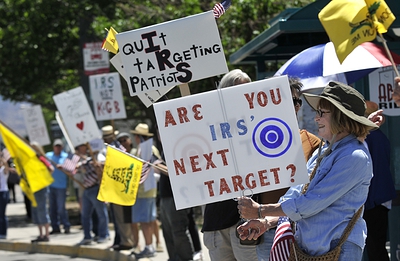 Republicans on Capitol Hill have sought to turn the IRS mess into a full-fledged political scandal, charging that President Obama or his White House or at least liberal IRS staffers deliberately tried to punish tea partiers and other conservative outfits. But Rep. Darrell Issa (R-Calif.) & Co. have come up empty-handed. A Treasury Department inspector general found no evidence of political influence or bias. The head of the IRS division in question in Cincinnati identified himself to investigators as a “conservative Republican” and said politics played no role in their vetting decisions. And now it turns out, as the Associated Press reported, the IRS also singled out for extra scrutiny groups applying for nonprofit status with “progressive, “occupy,” and “Israel” in their name. That is, liberal outfits were targeted, too. Oops.

Democrats on the House Ways and Means Committee have obtained a list of group names IRS staffers used when applying extra scrutiny to applications for nonprofit status. This list of words to look out for also included “Medical Marijuana,” “Occupied Territory Advocacy,” “Healthcare legislation,” “Paying National Debt,” and “Green Energy Organizations.” That AP reports that the IRS used those assorted terms from August 2010 through April 2013 to target applications for special review. It is unclear how many progressive or Occupy groups received additional attention from the IRS, or if those groups faced the sort of delays experienced by dozens of conservative groups did.

But this list shows that IRS employees weren’t only looking for conservative buzz words as they examined political nonprofit groups; they were on the watch for groups of all political stripes.

This IRS affair began in May when a top agency official—who was later put on leave—apologized for her staffers having targeted tea party groups. The revelation sent Washington into a frenzy, leading to a spate of hearings, hand-wringing by congressional Democrats and Republicans, and the resignation of then-acting IRS commissioner Steven Miller.

Miller’s replacement, current acting commissioner Danny Werfel, ordered a halt to the use of these additional watchwords, which were found on so-called Be on the Lookout, or BOLO, lists. (IRS officials had previously ordered their underlings to stop using “tea party” and “patriots.”) “There was a wide-ranging set of categories and cases that spanned a broad spectrum” on the BOLO lists, Werfel recently told reporters. Werfel described some of the words on those lists as “inappropriate.”

Not surprisingly, Democrats and Republicans in Congress are fighting over the significance of the latest revelations. From the AP:

Rep. Sander Levin of Michigan, top Democrat on the ways and means panel, said he was writing a letter to J. Russell George, the Treasury Department inspector general whose audit in May detailed IRS targeting of conservatives, asking why his report did not mention other groups that were targeted.

“The audit served as the basis and impetus for a wide range of congressional investigations and this new information shows that the foundation of those investigations is flawed in a fundamental way,’’ Levin said.

Republicans said there was a distinction. A statement by the GOP staff of House ways and means said, “It is one thing to flag a group, it is quite another to repeatedly target and abuse conservative groups.”

George’s report criticized the IRS for using “inappropriate criteria” to identify tea party and other conservative groups. It did not mention more liberal organizations, but in response to questions from lawmakers at congressional hearings, George said he had recently found other lists that raised concerns about other “political factors” he did not specify.

An IRS spokeswoman said that George, the Treasury Department inspector general, is reviewing how much the IRS scrutinized other groups.

So is it case closed on the IRS debacle? Not yet. The agency still needs to explain why its staffers singled out groups in this way, and how it further intends to streamline the vetting process. But is this a liberal political conspiracy? Sure doesn’t look like it.