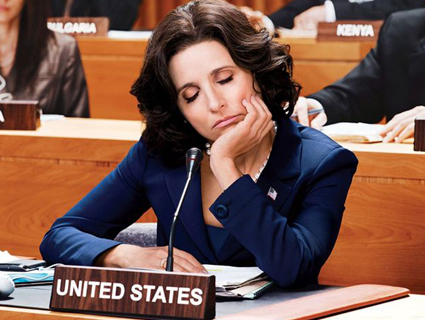 “You know, you’re about as annoying as a condom filled with fire ants. How’s that for a fucking metaphor?” Ohio congressman and gubernatorial candidate Roger Furlong snaps at his aide.

“Shut your mouth, you fat girl,” the congressman rejoins, as he fiddles with his smartphone while lumbering out of the vice president’s office.

If you tuned in to any of Season 1, this exchange from the new season should sound thankfully familiar. Season 2 of Armando Iannucci‘s political satire Veep (premiering Sunday, April 14 at 10 p.m. EDT on HBO) is all the things that made the first eight episodes so worthwhile: It’s a roaringly funny, mean-spirited burlesque that plays out like a good episode of The West Wing—if The West Wing were a slur-filled, punk-rock fantasy.

The passionately petty Selina Meyer (played by a pitch-perfect Julia Louis-Dreyfus) is still the American VP who can’t get any love from the press or administration, and can’t get any face time with POTUS. “I’m about to enter a national ass-kicking competition, with no legs… and a massive ass,” Selina remarks. Her staff (played by the series regular Matt Walsh, Sufe Bradshaw, Reid Scott, Anna Chlumsky, and Arrested Development alum Tony Hale) help her pencil-push an agenda while clumsily pursuing their own professional self-interest. Veep has a fairly simple vision of American government: All of them (middle-age senators, cynical data crunchers, aloof operatives) are douchey incompetents—vain, power-hungry, self-loathing, foul-mouthed, back-stabbing, and perpetually upset. In this sense, Veep nails down the tone of Washington in the same way that Scrubs painted an honest portrait of medical professionals: It’s an exaggerated, ridiculous depiction that veers on hitting too close to home.

What keeps the series from degenerating into the kind of tiresome moral wasteland portrayed in, say, the Netflix remake of House of Cards (or the heavy-handedness of Political Animals) is that it’s just so damn funny. The show had French-kissed idealism good-bye during the first 90 seconds of Season 1, and you’ll be glad to know that this season follows suit. Last year, the focus was on how Team Selina worked to survive the oppressive tedium that comes with getting completely sidelined by the White House—an administration that remains mostly faceless, seeing as how viewers never get to see the president (a conceit that was also an original idea for Aaron Sorkin‘s The West Wing, but we know how that turned out). Meyer, whose party affiliation is never made explicitly clear but who operates like a centrist Democrat, is constantly under siege from special interests and sneering politicos, all of whom are ready to crucify her at the first hint of faux pas.

In the second season, the focus is on Selina’s goal to grab more power and raise her national profile, a pursuit marked far more by childishness than any shred of personal triumph. What stands in her way (aside from the rank ineptitude) is the president’s pet pollster Kent Davidson (Gary Cole), a strategist so callous he’s described as the “Pol Pot of pie charts” and as having “ice in his semen.” (Think of Kent as a fictional rendering of Dick Morris, only with improved fashion style and the capacity for producing political analysis that is not completely worthless). Early in this season, Selina finds a timid ally in White House chief of staff Ben Caffrey (Kevin Dunn), who serves as a Pete Rouse-type player, and looks a lot like David Axelrod. “Kim-Jong-Whatever is swinging his nuclear dick, again,” Ben sighs as he briefs Selina on the foreign-policy bulletpoints of the day.

The first four episodes of the new season score major points for expertly lampooning the trivialities inherent in modern politics and media. “This needs to be the Gettysburg Address of tight-rope-walking, say-nothing bullshit,” an aide says, discussing the veep’s statement on Israel/Palestine. When an official White House photo shows Selina checking her Blackberry while the rest of the Situation Room is fixated on an ongoing hostage rescue mission, the image goes viral. The result is a Reddit and Tumblr abetted internet meme in which Selina-staring-at-her-cellphone is Photoshopped into landmark events in human history: The signing of the US Declaration of Independence, the 2004 tsunami, and so on. It’s a testament to the age we live in that meme-based mockery is now a prevalent if typically inconsequential component of the national conversation (Veep executive producer Frank Rich, “writer-at-large” at the meme-proficient New York magazine, would know). And Veep deserves credit for being the first TV show to cleverly acknowledge this reality.

Showrunner Iannucci, a pioneering comic writer whose influence stretches to Sacha Baron Cohen, Jon Stewart, Stephen Colbert, and Ricky Gervais, continues with his patented mold of rollicking commentary previously presented in British television like The Day Today and The Thick of It, and the latter’s brilliant 2009 spin-off film In the Loop. What fans like about Veep—the rapid-fire sardonicism, the mischievous deromanticization of political elites, the carefully constructed profanity that’s acidic enough to qualify as minor human rights abuses—is firmly intact.

Here’s a taste of the upcoming season: