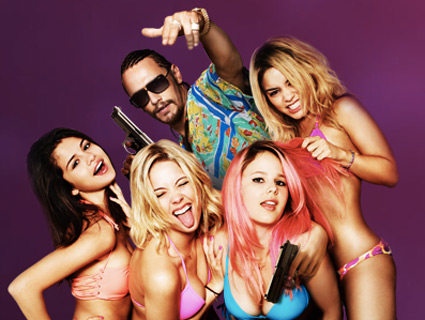 This movie strives for realism.

Who among us didn’t fund our college spring break trip with money stolen from a diner in a poor, predominantly black neighborhood? Who among us didn’t go to Florida with our friends and our Disney Princess backpacks, only to drunkenly strip naked in an alleyway and start flipping off passing cars for absolutely no reason? And who hasn’t dry-humped James Franco on a bed covered with $100 bills and loaded Uzis before embarking on a bikini-clad killing spree in a mansion?

In this sense, the violent and lotus-eating Spring Breakers is exactly like your average college spring break vacation.

I’m not going to waste too much time recapping the film; I’ve embedded a trailer below, which should more than suffice. The best way I can describe Spring Breakers (other than “Scarface meets Britney Spears,” which was already taken) is that this is Piranha 3D, except the piranha fail to show up. It’s a feverish and frenzied story about four spoiled, staggeringly immature, narcotics-addled white girls who have major race issues, but it’s not Girls on HBO. The film, directed by the fairly notorious Harmony Korine, torpedoes the Disney-era memories of Selena Gomez and Vanessa Hudgens in a haze of bare bodies, murdered hedonists, and snorted blow.

There have been so many fact-sheets and think pieces written about Spring Breakers that it’s nearly impossible for me to contribute anything novel at this point. And the film is so dense in its perverted ridiculousness that it would take me a three-part book series to unpack it all. I will however provide you with a brief guide to the rich philosophy—economic, moral, literary, political—of Spring Breakers, presented in digestible quotes from the film. Here you go:

Surmounting life’s many obstacles and coming out a winner

“You can’t be scared of shit! You gotta be HARD!”

“Seeing all this money makes my pussy wet.”

“This is the fuckin’ American dream! This is mah fuckin’ DREAM, y’all! All this shee-yit! Look at my shit:

Look at my shit.”

“I was the only white boy in my neighborhood.”

“I got machine guns…A fucking army up in this SHIT…I’M THE FUCKIN’ DEATH STAR…DROPPIN’ PLANES!!!!!”

(Quotes featured here are applicable in virtually any situation or argument, really.)

Spring Breakers gets a wide release on Friday, March 22. The film is rated R for practically everything that’s in it. Click here for local showtimes and tickets.