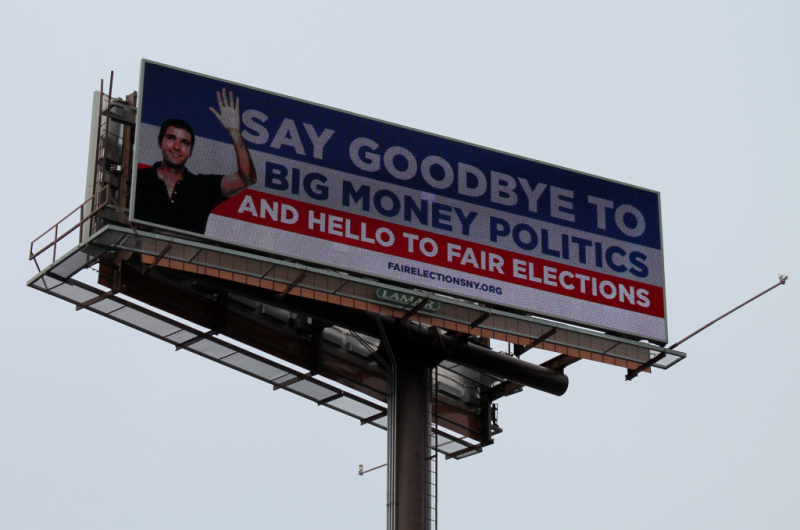 From the start, Organizing for Action, the pro-Obama advocacy group formed out of the president’s reelection campaign, said it would not lobby. OFA was created to galvanize tens of millions Obama supporters behind the president’s second-term agenda, including new gun-control laws, immigration reform, and legislation to address climate change. But OFA’s website makes clear that it “will not directly lobby elected officials on behalf of the policies it supports, nor will it hire lobbyists to do so.”

But recently, OFA registered as a lobbyist in New York State. What gives?

OFA recently joined the coalition of reform groups pushing for a new, statewide public-financing bill for all state elections in New York. Jon Carson, OFA’s director, wrote in an email that “OFA supporters are joining the fight to reduce the influence of special interests in state elections, and put the power back into the hands of New Yorkers.” At the same time, OFA’s chief of staff Grant Campbell told (PDF) the New York State Joint Commission on Public Ethics that OFA planned to spend more than $5,000 and so would need to sign up as a lobbyist. The group said it would lobby Gov. Andrew Cuomo (D) and the State Senate on the public financing bill. The conservative Washington Free Beacon site broke the story of OFA’s lobbying filing.

So did OFA violate its no-lobbying pledge? In name, yes; in practice, no. The way New York election law works, any decent-sized group urging lawmakers into action, whether by mobilizing voters outside the halls of government or pleading its case directly with elected officials, counts as a lobbyist. It’s a broader definition than we’re used to. All it takes is $5,000 or more in spending and New York State considers you a “lobbyist.”

I asked an OFA spokeswoman for her take on this. “In New York, our online grassroots communications in support of Fair Elections in New York require us to file disclosure reports, and OFA has filed all proper paperwork to meet those requirements,” she told me. “We will not directly lobby officials. This is a communications campaign to give our supporters the ability to push this important legislation to reduce special interest influence in that state.”

Now, if OFA does decide to directly lobby Governor Cuomo, say, or a member of the State Senate, then it’s case closed. That’s lobbying by anyone’s definition. But for now, OFA is doing what it’s always said it would do, and doesn’t seem to have run afoul its anti-lobbying pledge.