When President Obama took office in 2009, he promised to curb the influence of special interests. Yet his new lobbying rules and a Bush-era law passed in the wake of the Jack Abramoff scandal appear to have done little to curb lobbying—and may have created new loopholes for influence peddling. Even as the number of lobbyists has decreased, spending on lobbying has gone up, which experts attribute to a growing number of lobbyists operating under the radar.

A recent report by the Center for Responsive Politics (CRP) found that there were close to 15,000 officially registered lobbyists in 2007; by last year that number had dropped to slightly more than 12,000. In 2007, total spending on lobbying approached $3 billion, and by 2012 it had jumped to around $3.3 billion. “An amazing amount of money continues to go up, even as the number of people [lobbying] goes down,” says James Thurber, a professor of government at American University who has served on the American Bar Association’s lobbying reform task force. (The report attributed a small decline in lobbying spending in the past two years to a number of factors, including the economy.)

What’s happening here? Monte Ward, the president of the American League of Lobbyists (ALA), estimates that lots of folks are still lobbying; they’re just not telling the government. “With all the restrictions the administration has placed on lobbyists, I think some have decided it’s not worth registering,” he says, adding that they’re doing the same job, but just “getting in under the radar.” Tim LaPira, a political science professor at James Madison University who focuses on lobbying law, says the well-intentioned Bush and Obama policies “actually created a gross disincentive to want to be open and public about what it is you’re doing.” 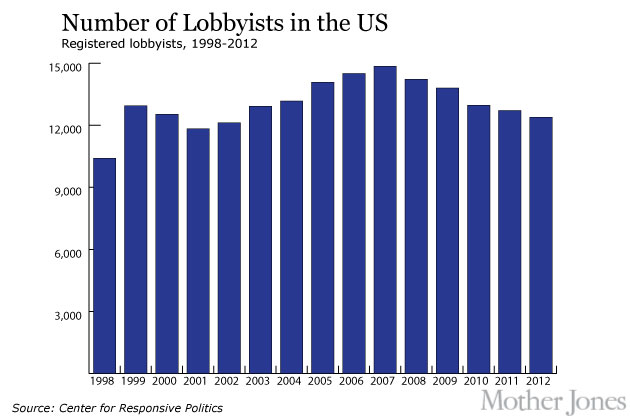 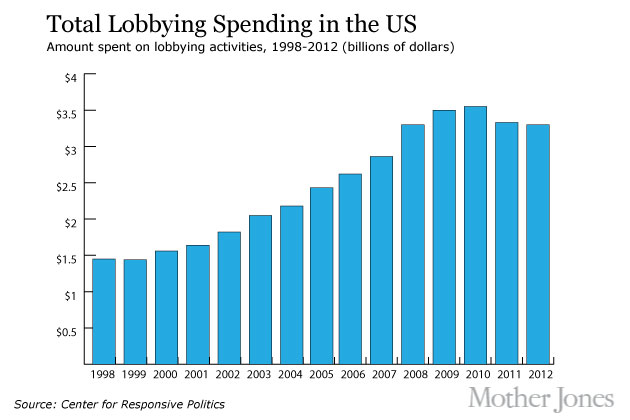 Reform advocates say lobbyists are weaseling around the definition of lobbying activities. The Honest Leadership and Open Government Act of 2007 states that if influence peddlers spend less than 20 percent of their time lobbying on the Hill (or in “preparation”), they don’t have to register as lobbyists. LaPira says this is “silly”: “Most doctors I know don’t spend 20 percent of their working hours in the operating room, but that doesn’t mean they’re not surgeons.” William Luneburg, a professor at the University of Pittsburgh School of Law who coauthored the American Bar Association’s lobbying manual, agrees. “You can do a hell of a lot of lobbying for somebody when you’re only doing 19 percent of your time for the client,” he says.

A good example of the less-than-20-percent lobbyist is former Sen. Tom Daschle (D-S.D.), who, after nearly 20 years in the House and Senate, went on to serve as a “special policy adviser” to the law firm Alston & Bird. The firm doubled its lobbying income during Daschle’s first year there. Former Speaker of the House Newt Gingrich made hundreds of thousands of dollars not lobbying for Freddie Mac, claiming he was paid $300,000 a year to be a “historian.”

Some lobbyists slide under the threshold by changing how they “interpret” their job duties, says LaPira: “There’s no way of knowing exactly how many minutes of the day any one lobbyist spent on any one thing.” Likely due to these slippery tactics, the CRP report says, almost half of lobbyists who were active in 2011 but not 2012 are still working for the same employer. Of those who changed firms, more than a third moved to employers in similar industries. 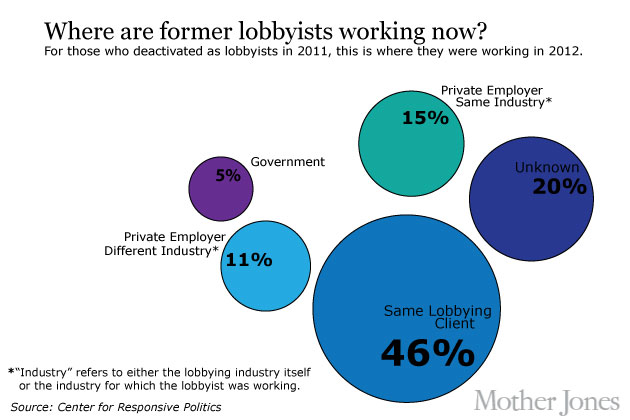 “In all likelihood, there are many, many, many, more people in Washington doing policy advocacy, broadly defined, than people doing actual lobbying,” LaPira says. Thurber, who helped Obama craft his lobbying rules, has advocated a more inclusive definition of lobbying, which would lump in folks in the advertising and PR industries, as well as grassroots activists, coalition builders, and think tanks that do advocacy. That would total some 100,000 people, he says. He adds that a more accurate number for the amount spent on lobbying could be up to “three times each year’s reported expenditures.”

Some lobbyists argue that the recent restrictions on them are unwarranted. Wayne Weidie, a senior governmental affairs adviser at the lobbying firm Adams & Reese, told the CRP, “I think some of the restrictions post-Abramoff were just overkill. Congress was just protecting itself from itself. Nobody buys anyone’s soul with a glass of iced tea.” ALA president Ward disagrees. He says he wants “an open and transparent process,” and notes that his organization backs several lobbying reforms, including lowering the 20 percent threshold, getting rid of various exemptions, and requiring ethics training for lobbyists.

Absent these kinds of fixes, the public doesn’t really know what forces are shaping the policies that affect them, says LaPira. “The public should have a right to know who’s working to advocate for their own interest and for interests that they…may not agree with.” Right now, he says, “We don’t really know what’s happening.”