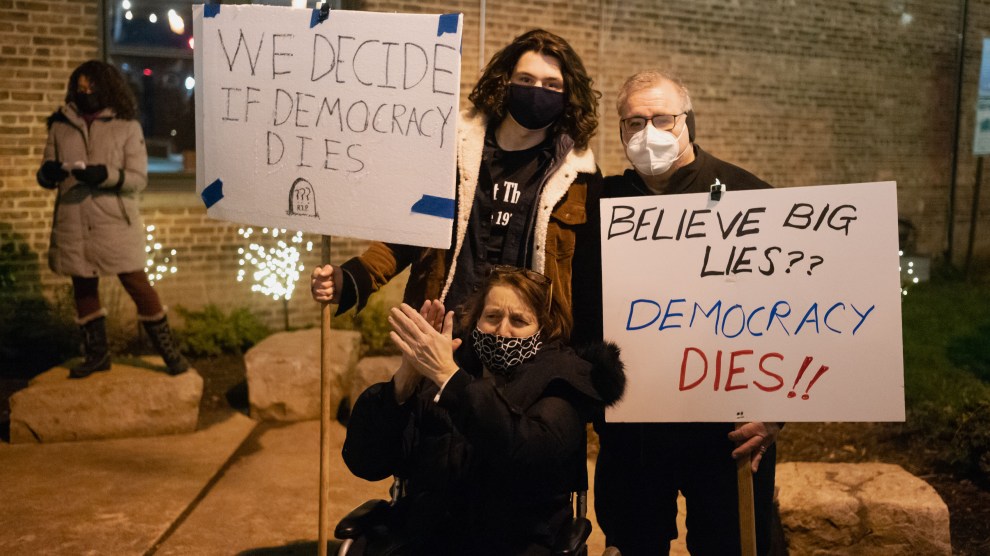 Yesterday, Rep. Lauren Boebert (R-Colo.) sent out a campaign with a solemn, all-caps heading: PARTICIPATING IN OUR CONSTITUTIONAL REPUBLIC.

The email hails voting as a part of our “national identity” which has enabled “the American experiment in representative government to continue for almost 250 years.”

As I read the email, I noticed that Boebert’s campaign uses a lot of words here to describe our form of government. It’s a “constitutional process.” It’s “representative.” But one word is glaringly absent: “democracy.”

Indeed, Republicans across the country are removing the word “democracy” from their lexicon. My colleague Pema Levy reported today that in Arizona, Senate candidate Blake Masters argued that the United States is not a democracy but a republic. “It sounds like a nerdy takedown,” she writes, “but it’s being bandied with frequency by Republicans who also support minority rule and supported overturning President Biden’s 2020 victory.”

It seems natural that Democrats would prefer the word “democracy” and Republicans “republic,” if only for sound-alike reasons. But the United States is, in fact, both those things. Refusing to accept that we live in a democratic republic is tantamount to suggesting that voters should not be entitled to choose their political party at all.

Republicans have long proclaimed that “we are not a democracy.” In the 1960s, the distinction became particularly linked with the John Birch Society, an anti-Communist group associated with a rising populist right. The idea offered a historical righteousness for the group’s opposition to desegregation and multi-racial democracy. “For us baby-boomers,” Ed Kilgore noted in New York Magazine in 2019, “the Birchers’ use of the term republic to justify all sorts of artificial restraints on popular majorities rings familiar.”

As Jamelle Bouie has written for the New York Times, the phrase invokes the idea that the Founders designed our system of government to combat the tyranny of the majority—but it misreads the substance of their arguments and becomes instead an argument for minority rule. “The point of the slogan isn’t to describe who we are but to claim and co-opt the founding for right-wing politics,” Bouie writes, “to naturalize political inequality and make it the proper order of things.”

The fussiness over the word “democracy” reminds me of George Orwell’s 1946 essay “Politics and the English Language,” in which the writer notes that “political speech and writing are largely the defence of the indefensible.”

Defenceless villages are bombarded from the air, the inhabitants driven out into the countryside, the cattle machine-gunned, the huts set on fire with incendiary bullets: this is called pacification. Millions of peasants are robbed of their farms and sent trudging along the roads with no more than they can carry: this is called transfer of population or rectification of frontiers. People are imprisoned for years without trial, or shot in the back of the neck or sent to die of scurvy in Arctic lumber camps: this is called elimination of unreliable elements. Such phraseology is needed if one wants to name things without calling up mental pictures of them.

Democrats are guilty of many of the pitfalls Orwell outlines, namely vagueness and cliché. The refrain that “democracy is on the ballot” does not invoke mental imagery of Trump supporters busting through barricades at the Capitol and beating and tasing a police officer on January 6—nor does it paint a picture of what life in the United States might look like if our democratic institutions continue to erode.

But when Republicans say that the United States is not a democracy, they are, to reference Orwell, obscuring the gap between their real and their declared aims. By eliding the word “democracy,” Republicans don’t honor our Founding Fathers; instead, they veil their desire to steal elections.

Implicit in the “we are not a democracy” cant is the notion that it doesn’t matter that a majority of Americans disagree with the overturning of Roe v. Wade, or that five of the Supreme Court justices who made that decision were appointed by presidents who lost the popular vote. Instead of “the United States is not a democracy,” Republicans should just say what they mean: “The United States should be governed by minority rule.”

When a politician sends a campaign email asking her constituents for their vote, she is asking them to participate in democratic process. When she refuses to call that process what it is, she’s telling them that she doesn’t care what they have to say, anyway.