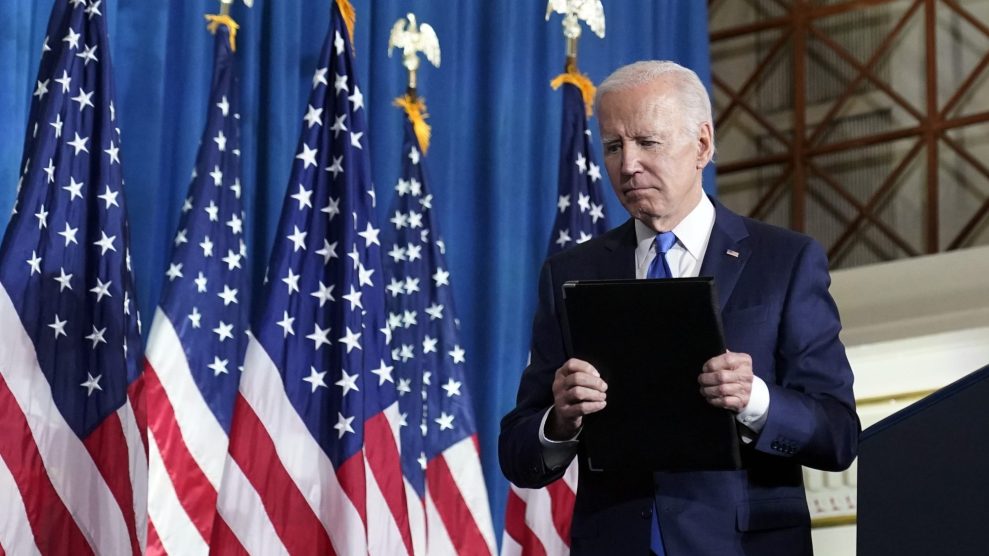 President Joe Biden leaves the stage after speaking about threats to democracy on November 2, 2022, in Washington, DC. Alex Brandon/AP

Editor’s note: The below article first appeared in David Corn’s newsletter, Our Land. The newsletter is written by David twice a week (most of the time) and provides behind-the-scenes stories about politics and media; his unvarnished take on the events of the day; film, book, television, podcast, and music recommendations; interactive audience features; and more. Subscribing costs just $5 a month—but you can sign up for a free 30-day trial of Our Land here. Please check it out. And please also check out David’s new New York Times bestseller: American Psychosis: A Historical Investigation of How the Republican Party Went Crazy.

On Wednesday night, less than a week before the midterm elections, the president of the United States of America delivered a speech asserting that democracy was threatened by MAGA extremism and Donald Trump’s baseless claim the 2020 election was stolen from him. “It’s damaging, it’s corrosive and it’s destructive,” Joe Biden said. He added, “Make no mistake, democracy is on the ballot for all of us.”

The speech was…fine. He was correct, if not a bit school marmish. He said the right words. But would it make a difference? Would anyone other than citizens already concerned about the fate of American democracy be moved or motivated by Biden’s address? Sure, he invoked lofty abstractions, such as liberty and opportunity. And he reminded us, “Freedom is not free.” Yet there was no gut punch. If this is a break-glass moment—as I believe it is—there were no shards.

Biden took a few pokes at Trump and the MAGA GOP. But perhaps looking to counter the inevitable criticisms that he was being divisive, he insisted that Trump’s “extreme MAGA element” was “a minority of that party,” though “its driving force.” This depiction casts the GOP as redeemable. If only the non-MAGA majority could gain control, all will be well. But who, exactly, is that silent Republican majority? This characterization downplays the threat posed by the Rs and allows independent and in-the-middle voters considering tapping a Republican candidate to view that person as a reasonable choice and the party itself as a potentially positive force. My Republican is not an extremist.

Biden elided an ugly truth: The GOP in its entirety is endangering democracy. It is an entity led by a scoundrel who rejected legitimate election returns; who persuaded tens of millions of Americans to believe his false allegations of a stolen election; who schemed (probably illegally) to overturn the vote; who incited violence in a bid to retain power and has since vowed to pardon the January 6 insurrectionists, should he be returned to the White House; who embraced the loony QAnon conspiracy theory; and who recently posted an antisemitic threat on social media.

None of this has caused Republicans to break with Trump. In fact, more and more members of the party at all levels are emulating him. As Biden noted, 300 GOP election deniers are on the ballot this Tuesday. That group includes secretary of state candidates in swing states who are aligned with QAnoners and other conspiracy kooks, who have championed the Big Lie, and who obviously cannot be trusted with overseeing elections. It includes gubernatorial and senatorial contenders of similar ilk. The GOP nominee for governor in Pennsylvania, Doug Mastriano, is a January Sixer who has hobnobbed with a prominent antisemite and assorted Christian nationalists. Senate candidate Dr. Mehmet Oz is a proven huckster; Herschel Walker is an idiot with a troubled and violent past. JD Vance, who may become an Ohio senator, has demanded the “de-Nazification” of the US government, by which he means illegally rooting out all liberals. The GOP gubernatorial nominee in Wisconsin Tim Michels vows to make sure no Democrat will ever be elected in his state, should he triumph.  Incumbent Wisconsin GOP Sen. Ron Johnson says he may not accept election results should he lose. Arizona gubernatorial candidate Kari Lake mocked the attack on Paul Pelosi and claimed there was no way Biden received 81 million votes in 2020. (He did.)

Meanwhile, House Republicans, assuming they will win control of that chamber, are already preparing multiple investigations of Hunter Biden and indulging in other right-wing fever dreams by readying assorted impeachments, including that of Biden, Vice President Kamala Harris, and Homeland Security Secretary Alejandro Mayorkas—just for starters. And we can expect vindictive and reckless investigations of Dr. Anthony Fauci, the FBI’s Russia probe, the National Archives (for daring to demand Trump return the sensitive government documents he stole), and perhaps even Hillary Clinton’s emails and Benghazi. Congressional Republicans are also considering proposals to cut Social Security, Medicaid, and Medicare, undo Biden administration actions to address the perils of climate change, criminalize all abortions nationally, and threaten an economic and financial crisis over the issue of raising the debt ceiling. And a GOP-controlled House will likely see the influence of the wingnut wing—Marjorie Taylor Greene, Lauren Boebert, and assorted newcomers—widen. Greene has absurdly claimed that Democrats are “killing” Republicans.

In short, the crazies—the liars, the conspiracists, the unhinged and those who exploit the unhinged—are at the gates. And they have plans—plenty of plans. Oh, and there’s this: If they attain greater power in Congress and the states—especially over the vote-counting systems—that could pave the way for a restoration of a vengeful Trump and further grease the path toward authoritarianism and minority-rule.

This is a serious moment. I don’t believe the end of America is necessarily at hand—though it could be—but there’s no question that this is a crisis for democracy in the United States. Given that, Biden’s speech did not go far enough. I imagine the White House calculated that it was best to keep the address from being too partisan. A presidential speech might be regarded as more serious and receive more media coverage. Yet the broadcast networks did not cut into their previously scheduled shows to air his remarks. Nor did the speech do much to change the political landscape or the national conversation before the midterms.

Biden did not sufficiently tie the need to protect American democracy to the Democrats’ desire to safeguard American families. Democracy must be preserved, he could have said, so we can make sure Republicans don’t make good on their threat to whittle away Social Security. Or so Democrats could deliver on lower prescription drug prices, cheaper insulin, paid family leave, universal pre-K, expanding Medicare to include dental coverage, and more, over the opposition of Republicans. Hey America, you want teeth? Then vote to defend democracy. You want retirement security? Then vote to defend democracy.

Biden rendered the protection of democracy as a goal in and of itself. Of course it is. But for some Americans, that might be too abstract. They care about it, but they don’t feel strongly about it. (See this much-discussed New York Times poll.) All good messaging resonates psychologically and tends to connect with specific needs, desires, and dreams. Biden did not make that connection. Moreover, though he has raised this issue of democracy imperiled by a dangerous group of Republicans several times in recent weeks, he has not steadily repeated the message in a kickass manner. Gone are the days when a president can deliver a Big Speech and shift the terrain. That’s not how the world works anymore. Unfortunately, the basics of marketing prevail, and a fundamental one is repeat, repeat, and repeat.

If there is an emergency at hand, the president, his administration, and his party should all act as if there is an emergency at hand—and fight like hell. What else is going to cut through the immense info-clutter that clouds all our lives? Fighting like hell means clearly identifying the danger and calling out the threats. The Republicans kick the Democrats in the teeth a million times a day. The Dems are thieves, radicals, commies, tax-hikers, (anti-white) racists, soft-on-crime anti-American and anti-Christian woke evildoers who are purposefully trying to destroy the republic. (In some renditions, they are also satanic pedophiles.)

Don’t bring a knife to this gunfight. The Democrats don’t have to resort to such demagoguery. But they do have to battle back with similar intensity and fierceness. That was missing from Biden’s speech—and from much of the Democratic messaging this entire campaign season. Some Democratic campaigns and candidates have thrown powerful punches. Barack Obama showed how to do it at a recent campaign rally. But the White House has not led the way. Perhaps that is a tough task to pull off when the president is sagging in the polls. Yet what is another option?

Yeah, yeah, it’s a bit too late to be complaining now. But I have been raising a version of this fundamental point for months. Who knows what’s going to happen on Tuesday? It is easy to lob brickbats from the sidelines and whine about messaging and the obvious missteps and miscalculations. My take might not be supported by polling and data. But all I know is that one side has created a fake emergency (the election was stolen and Biden wants to annihilate America!) and has mobilized millions with an unrelenting and combative message, while the other side that faces a true emergency has come across as less committed to its cause.

It’s true that the party in the White House usually takes a shellacking in the midterms. And inflation cannot be thwarted by a well-crafted political narrative. These are externalities that might be impossible to overcome. But if there ever were a time when the in-party had a chance, this ought to be it. The Democrats are up against a party led by the unpopular and autocratic Trump that has swerved far right and into the swamplands of irrationality and, as Biden put it, “semi-fascism.” The Big Lie, January 6, a war on democracy, a war on women’s freedom, a disastrous Covid response, threats to essential programs such as Social Security and Medicare—there’s so much to pin on the GOP. Yet the last few months have been more an opportunity lost for the Democrats than an opportunity seized. Many Americans might soon pay a high price for that.

Got anything to say about this item—or anything else? Email me at ourland@motherjones.com