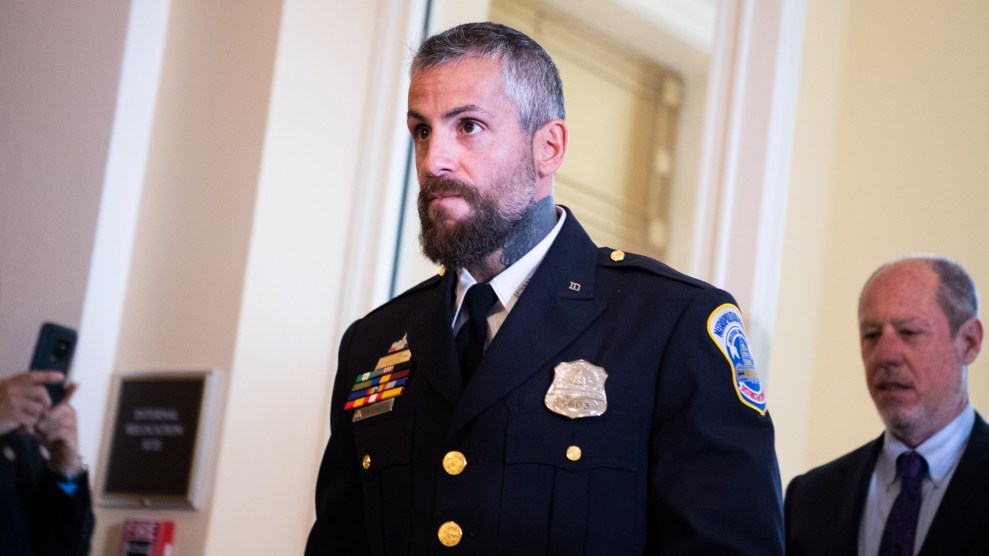 On Thursday, a US District Court judge sentenced a January 6 rioter to seven years and six months in prison for dragging DC police Officer Michael Fanone into the angry mob at the Capitol, an act that resulted in one of the most brutal attacks that day. Albuquerque Cosper Head, a 34-year old man from Tennessee, was responsible for forcibly moving Fanone from a tunnel into a crowd of angry rioters who proceeded to beat him and shocked him with a stun gun at the base of his skull.

Before sentencing, Judge Amy Berman Jackson told Head, “He was your prey. He was your trophy.” Head, who declined to address the court,  is one of the hundreds of Trump supporters charged for their roles in storming the Capitol in a violent attempt to overturn the 2020 election results.

The ex-construction worker, who pled guilty in April, has received one of the longest sentences of the convicted insurrectionists so far, second only to an ex-NYPD officer who was given nearly ten years last month. Head’s sentence is only six months shy of the maximum eight years for these charges.

The details of the attack are shocking. According to prosecutors, Head yelled “I got one!” before grabbing Fanone around his neck and dragging him before the crowd. Head then held the officer in place as the crowd proceeded to beat and taze him repeatedly, leaving burn marks at the base of his neck. Body camera footage captured Fanone losing consciousness for more than two minutes during the assault. Court records also state that Head attempted to remove Fanone’s weapon from its holster.

The former officer recounted the details of this attack during his testimony at the first congressional hearing during the January 6 investigation. As my colleague, Inae Oh, previously reported:

“I was grabbed, beaten, tased, all while being called a traitor to my country,” Officer Michael Fanone told lawmakers in his opening statement. “I was at risk of being stripped of and killed with my own firearm as I heard chants of ‘Kill him with his own gun.’ I can still hear those words in my head.”

During the sentencing hearing, Fanone said that he suffered a heart attack and sustained a traumatic brain injury from the attack, ending his career in law enforcement. While he’s gained some fame from his testimony and even secured a book deal, he said he still misses the life he had before.

“I would trade all of this attention to return to policing, but I can’t do that,” he said, according to reports from the LA Times. “And the catalyst for my loss of career and the suffering that I’ve endured in the past 18 months is Albuquerque Head.”

There are more than 900 people who’ve been federally charged for their actions on January 6. Donald Trump and his former chief of staff were both recently subpoenaed for various election interference investigations. Meanwhile, there are currently 291 election deniers who are running for office.

“The dark shadow of tyranny unfortunately has not gone away,” Judge Jackson said at the hearing. “There are people who are still disseminating the lie that the election was stolen. They’re doing it today. And the people who are stoking that anger for their own selfish purposes, they need to think about the havoc they’ve wreaked, the lives they’ve ruined.”