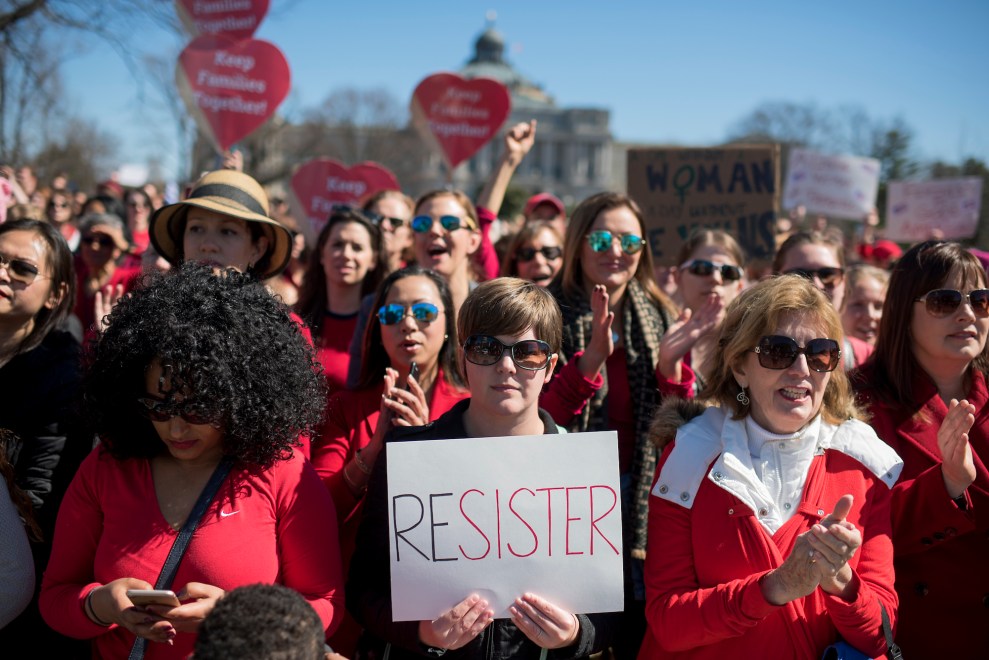 Looking to build on the momentum of January’s Women’s March, many women are using International Women’s Day today to participate in a general strike—coined “A Day Without a Woman”—to underscore the often underappreciated importance of women in the workforce and the economy. Across the country, many women didn’t show up at work, while others wore red to demonstrate their solidarity with the movement. As the events on Wednesday unfolded, women demonstrators have addressed more than opposition to the current administration, and have called out the wage gap, protested attacks on reproductive rights, and demanded policies such as parental leave.

Aside from wearing red, those who couldn’t take the day off of work were encouraged to contact their lawmakers, telling them to fight Republican threats to defund Planned Parenthood, or they were urged to abstain from spending money to demonstrate the power women have in businesses and the economy.

Unlike the Women’s March, the scale of Wednesday’s strike will prove to be difficult to measure. But from school closings to rallies, here are some ways women are marking the day:

Female lawmakers, led by House Minority Leader Nancy Pelosi (D-Calif.), staged a walkout on the steps of the Capitol to address the core issues surrounding the strike.

Honored to join my fellow Democratic women (and men!) standing in solidarity with #DayWithoutAWoman! #InternationalWomensDay pic.twitter.com/jAZhuIycdl

#IFightFor the millions of women who rely on Social Security. Our moms deserve financial security in their golden years! #DayWithoutAWoman pic.twitter.com/mQoa4qi1CD

Across the country, more than 75 percent of teachers, from kindergarten through high school, are women. At least three school districts were shut down on Wednesday, in Alexandria, Virginia, in Prince George’s County, Maryland, and in Chapel Hill, North Carolina, after an overwhelming number of female teachers informed their supervisors they planned to take off work.

All @ACPSk12 schools are closed Wednesday ahead of #adaywithoutwomen. Here’s the district’s reasoning. #FOX5DC pic.twitter.com/LzbngK8fyk

Women participated in rallies all around the country, from San Francisco to Rhode Island. In New York, several people were arrested outside a Trump hotel property, including prominent activist Linda Sarsour, who was one of the co-chairs of the Women’s March.

#daywithoutawoman rally in San Jose. Love to all my fellow women. #IWD2017 pic.twitter.com/Tt6cFY8HhI

President Donald Trump, who was caught bragging about grabbing a woman’s “pussy” without her consent, recognized the day on social media, where he insisted he has “tremendous respect for women.” First lady Melania Trump also made a rare appearance in Washington on Wednesday to host a luncheon honoring International Women’s Day. Kellyanne Conway, Ivanka Trump, and Sen. Susan Collins (R-Maine) were among the guests in attendance.

I have tremendous respect for women and the many roles they serve that are vital to the fabric of our society and our economy.