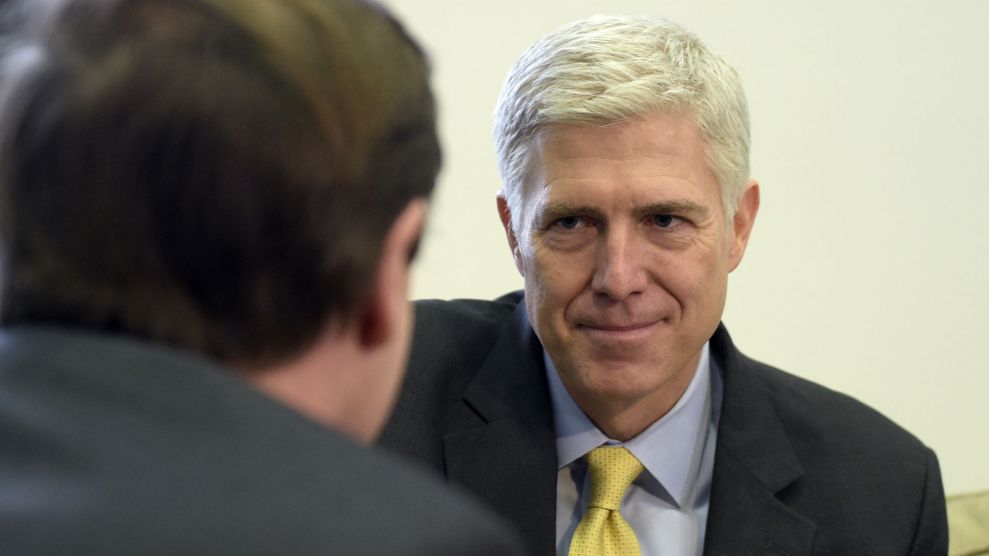 During his campaign, President Donald Trump pledged his commitment to the anti-abortion movement and promised he would only appoint Supreme Court justices who would overturn Roe v. Wade, the 1973 decision that made abortion legal. He also promised to permanently defund Planned Parenthood and enshrine into law a ban on public funding for abortion and one prohibiting abortion after 20 weeks. The person most qualified to meet the first challenge is apparently Neil Gorsuch, a 10th Circuit Court of Appeals judge, whom Trump nominated last month to fill Justice Antonin Scalia’s spot on the bench. Gorsuch’s confirmation hearings begin on March 20.

The announcement was greeted with cheers by the pro-life community. “[Trump] has proved himself to be a man of his word,” wrote Operation Rescue’s President Troy Newman, who has argued that the US government has the responsibility to execute “convicted murderers, including abortionists.” Said Marjorie Dannenfelser, the president of the conservative and pro-life women’s group the Susan B. Anthony List, “Should pro-abortion Democratic Senators choose to filibuster this immensely qualified nominee, they do so at their own political peril.”

Overturning Roe will take much more than the confirmation of a single justice, but Gorsuch’s record as a judge gives reproductive rights advocates some evidence of his legal approach to some of these issues. Appointed to the circuit court by President George W. Bush in 2006, he wrote the dissenting opinion in a decision blocking Utah’s attempt to defund Planned Parenthood in October. As a federal appellate court judge, he also ruled for Hobby Lobby and against the Obamacare rule that requires companies to include contraception coverage in their health insurance plans. “I think it’s fair to say he’s a leader in terms of conservative jurisprudence,” Tom Fitton, the president of the conservative watchdog group Judicial Watch, told Newsweek. “And I think he quickly would become a strong voice on the court for his constitutional approach to decision making.”

Cases can take years to even make it to the Supreme Court, and the Justices decide to hear only a fraction of those that do. This is one reason why Roe will not be overturned immediately no matter who is on the court. But the conservative wave in Congress and state legislatures have ensured that there will be no shortage of proposals to curtail women’s health and, by extension, no dearth of court cases making their way toward the high court.

Here are some of them:

About half of Planned Parenthood’s funding, or $553.7 million, comes from federal, state, and local governments, and 75 percent of that comes from Medicaid. Over the last few years—in part because of a series of surreptitious videos made about the organization—more than a dozen states have enacted laws to remove funding for the nation’s single-largest women’s health care organization by cutting Medicaid dollars and Title X family-planning grants. Under the Hyde Amendment, a federal budget rider for the last 40 years, Planned Parenthood is already prohibited from using any federal funds to pay for abortions, which account for only 3 percent of the organization’s health services, the bulk of which are contraception, Pap smears, STD screenings, and menopausal care.

Courts in Texas, Arkansas, Louisiana, and elsewhere have blocked attempts to cut Planned Parenthood’s Medicaid dollars, ruling that low-income people should be able to access health care from the provider of their choice—and some of those cases are ongoing. In February, the attorney general of Texas, Ken Paxton, pledged to appeal a federal court’s decision to block the state’s funding ban. And whether or not states can withhold Title X money from Planned Parenthood remains an open question. Because of this, says Donna Crane, vice president of policy at NARAL Pro-Choice America, Planned Parenthood funding is ripe for a high-profile legal battle.

And Congress is gearing up to make that happen: This year, Sen. Joni Ernst (R-Iowa) introduced two bills that would block Title X and Medicaid money from going to Planned Parenthood. In the past, similar bills have either died on the floor or been vetoed, but Trump has promised to sign the legislation. At a House committee hearing last month, Rep. Louise Slaughter (D-N.Y.) called the Title X funding ban “the most serious threat women have faced so far this Congress.”

In Roe, the Supreme Court ruled that the right to abortion is protected up until the point of fetal viability, usually defined as 24 weeks gestation. But since 2010, 19 states have passed laws banning abortion at 20 weeks, arguing that at this point the fetus can feel pain. Only 3 of the 19 statutes have been blocked by lawsuits. In Arizona, a challenge to a 20-week law made it up to the Supreme Court in 2014, but the high court decided not to hear the case, leaving in place a 9th Circuit Court decision to block the law.

At the federal level, Congress has for years tried and failed to pass a 20-week ban. Trump, however, has promised to sign a 20-week ban if it gets to his desk. And his message of approval combined with Republican domination of governor’s mansions and statehouses have inspired the introduction of 20-week ban legislation in at least four more states: Pennsylvania, Iowa, Kentucky, and Virginia. Ohio Gov. John Kasich signed a similar measure in December.

Both abortion-rights foes and advocates have acknowledged that pre-viability prohibitions such as these pose a strategic threat to Roe by challenging its very framework. “I do think [20-week bans] would present very dynamic challenges for the Supreme Court,” John Seago, the legislative director of Texas Right to Life, told NBC News. “They would make [the justices] reanalyze the premise to uphold elective abortion as a legal right.” Mike Gonidakis, the president of Right to Life in Ohio, which enacted a 20-week ban this year, called them a “winnable battle with the federal judiciary.”

The challenge for the pro-life movement will be finding a moment and a federal court—Ohio’s 10th Circuit, for instance—that will uphold a 20-week ban, in which case the differing decisions between the 9th and the 10th circuits would make consideration of the issue by the high court more likely.

The Supreme Court has already heard two cases related to the Obamacare requirement that certain employers offer insurance plans that cover contraceptives—once in Burwell v. Hobby Lobby and a second time in Zubik v. Burwell. Both cases were brought by businesses whose leadership argued the contraceptive mandate conflicted with their religious beliefs. Zubik v. Burwell was a consolidation of seven different cases from a number of different circuit courts. Last May, the Supreme Court sent it back to lower courts and asked the Obama administration to come up with a compromise. Eleven days before the end of his term, the Obama administration announced that the solution suggested by the high court in its remand was impossible.

It’s unclear exactly what will happen with the Zubik cases. Based on the Obama administration’s response, they may not be settled in the lower courts and are likely to return to the Supreme Court for further review. If that happens, Gorsuch’s ruling from the 10th Circuit in Hobby Lobby offers a sense of where he stands on the issue. There are at least 10 other lawsuits related to the contraceptive mandate that are also now in federal appeals courts.

There’s also the possibility that Health and Human Services head Tom Price could lead the efforts to change part or all of the contraception rule by either expanding the religious exemptions in the law to satisfy companies such as Hobby Lobby or getting rid of the requirement altogether. In those scenarios, the plaintiffs fighting the rule might drop their cases.

Recent Supreme Court decisions may have given abortion advocates cause for optimism about the preservation of abortion rights by the nation’s highest court. “We have the wind at our backs,” said Zoe Levine, a staff attorney for the Center for Reproductive Rights, the group that successfully defended a Texas clinic against two anti-abortion laws before the Supreme Court last year. “We feel strongly that the abortion right is entrenched in the Constitution.” That may all change should Trump be given the opportunity to nominate a justice after Gorsuch.