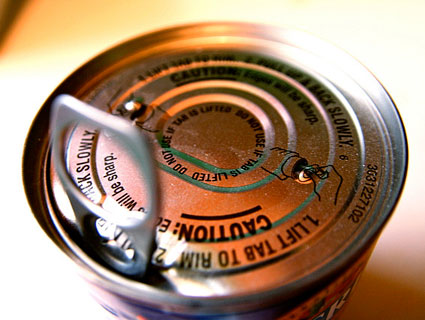 The food industry likes to portray obesity as a matter of personal responsibility: People who eat too much gain weight, and it’s their own fault.

That view willfully neglects the role that industry marketing, particularly to children, plays on shaping people’s food habits. Meanwhile, evidence is mounting that exposure to certain industrial chemicals in food, often at very low levels, changes the way people metabolize calories and can lead to weight gain. While no one would say that these chemicals, known as obesogens, are the sole cause of rising rates of obesity in the United States, they may well be contributing significantly to it.

One of the most common of these obesogens is bisphenol A, commonly known as BPA, the ubiquitous chemical found in everything from the lining of cans to the paper that most receipts are printed on. Research suggest that it’s in the urine of upwards of 90 percent of Americans—evidently at levels high enough to cause harm.

According to University of Missouri biologist and well-known BPA researcher Frederick vom Saal, it also affects how the body deals with fat. “BPA reduces the number of fat cells but programs them to incorporate more fat, so there are fewer but very large fat cells,” vom Saal recently told Environmental Health Perspectives. “BPA exposure is producing in animals the kind of outcomes that we see in humans born light at birth: an increase in abdominal fat and glucose intolerance.”

A study released last week by University of California-Irvine researchers further implicates BPA in the obesity problem—and raises even greater suspicion about a related compound called bisphenol A diglycidyl ether, a combination of BPA and something called epichlorohydrin, this World Health Organization report explains. It’s through BADGE that BPA makes it into in food can linings. UC-Irvine biologist Bruce Blumberg, who coauthored the study, explained to me in an email that the BPA that ends up in our food through can linings gets there when BADGE breaks down into its components.

Blumberg and his team found, though, that BADGE in its whole state is an even more potent obesogen than BPA—and its effects are independent of BPA. Both BADGE and BPA can trigger preadipocytes—which are known as “pre-fat cells” because they can either lie dormant, copy themselves, or turn into fat—to become fat cells. The UC-Irvine researchers tested the effects BADGE and BPA have on stem cells, our bodies’ cellular building blocks that can differentiate into the whole variety of human cells. They found that while BADGE can turn stem cells into fat cells at tiny doses, BPA doesn’t have that effect at all. The result surprised Blumberg and his team, because they went into the study assuming that BADGE wasn’t an obesogen.

How small are the doses at which BADGE does its dirty work? Blumberg told me that the stuff can induce stem cells to become fat cells at levels as low as 3 parts per billion. That’s way, way below the level the FDA has declared the “no observed adverse effect level” for BADGE, which is 15 parts per million, Blumberg wrote in an email.

While numerous studies have measured how much BPA leaches from cans and into our bodies, very little research has been done on our exposure to BADGE in its whole state. But BADGE does appear to leach into food. Blumberg says that one study found it in humans at a level of around 15 parts per billion—significantly more than the 3 parts per billion at which his team saw fat-inducing effects.

Clearly, more research needs to be done to sort out just how BADGE turns stem cells to fat cells at tiny doses. Perhaps it’s the other ingredient in BADGE, epichlorohydrin, that has the fat-transforming effect on stems cells, or perhaps it’s the way BPA and epichlorohydrin interact. But the UC-Irvine study represents yet another bit of evidence that the FDA, which recently reaffirmed its approval of BPA in can linings, isn’t taking the threat of industrial chemicals in food nearly seriously enough. And it also strongly suggests that at least some of our obesity problem stems not from personal choice but rather from decisions made behind closed doors by the food and chemical industries, which have found it profitable to put this stuff in our food containers.