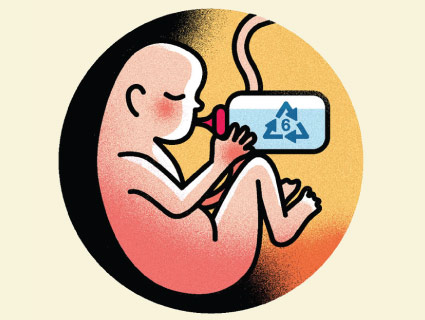 A new study shows that girls who were exposed to chemical bisphenol-A (BPA) as fetuses are more highly prone to hyperactive, anxious, aggressive, and depressed behavior than boys of similar age. BPA, an estrogen-mimicking chemical used to harden plastic, is found in consumer products ranging widely from canned soups to baby bottles and grocery receipts. (MoJo‘s Kiera Butler’s got the full rundown on BPA’s health risks.)

The study, published Monday in the journal Pediatrics, joins a mounting body of evidence linking BPA to various reproductive and developmental diseases. The study’s authors tested urine samples of 244 mothers during pregnancy and at birth and of their children for the first three years. The urine tests showed BPA in 84 percent of the women’s samples and in 96 percent of the children’s, with indications that behavior problems in the girls rose with rising BPA levels. But while the study shows a strong correlation between behavioral change and BPA levels, its authors say more research is needed.

The growing case against BPA has motivated an increasing number of state legislators to ban the substance from certain consumer products. Earlier this month, California officially banned BPA from baby bottles and sippy cups, joining 10 other states that have recently passed similar bills. Around the world, BPA is already outlawed in the European Union, Canada, China, the United Arab Emirates, and Malaysia.

The Food and Drug Administration, which oversees federal regulation over chemicals in the United States, does not support a ban on BPA. This, despite being heavily criticized by consumer advocacy groups and being sued for failing “to safeguard the food supply.” In 2009 the Consumers Union warned of the health risks posed by BPA in food containers, basing its position on more than 200 different scientific studies. The FDA recognizes that the recent studies on BPA warrant reason for “some concern.” But it ultimately argues that there are “substantial uncertainties” in the interpretation of the studies and says it is conducting its own research on the matter.

In the absence of compelling science, regulators have two choices: exercise the “precautionary principle” and ban [BPA] until it can be proven safe, or approve it until it can be shown to be harmful. The United States and European safety agencies—and the food industry, of course—prefer the latter approach.

It’s not just about the science. Unsurprisingly, plastic and other industry lobbyists routinely call into question the methodology of studies condemning BPA use, as they did in this most recent case. The criticism makes sense given that industry groups have also been campaigning aggressively against state legislation banning BPA from certain consumer products. In California alone, the American Chemical Council (ACC) spent $9.4 million on lobbying since 2005, Greenwire reported earlier this month. And the money can be persuasive. Mother Jones reported last month that the Susan G. Komen foundation, a leading breast cancer research group, downplayed BPA’s links to cancer around the time it was receiving funding from pro-BPA pharma companies.

Now that states are starting to move toward BPA bans despite industry opposition, groups like the ACC seem to be stepping up their game, making a new push for the FDA to have final say over BPA regulation. Of course, if federal jurisdiction were to override the emerging state-level bans, the FDA’s inconclusive position on BPA as a public health threat would work well in the industry’s favor.