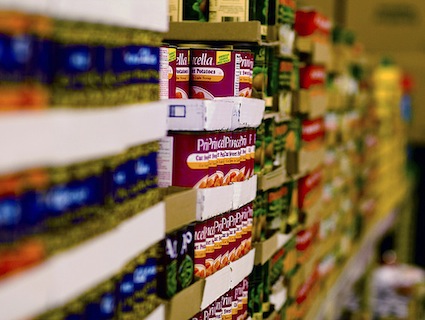 Bisphenol A, a controversial chemical used in the lining of nearly all cans used by the food and beverage industry, got a reprieve from the government last week. Responding to a court order to decide on the Natural Resources Defense Council’s petition to ban the stuff on the grounds that it causes harm even in tiny doses, the Food and Drug Administration rejected the petition and upheld its approval of BPA.

That’s good news for some of the globe’s biggest chemical companies. According to Bloomberg News, the global BPA market is worth about $8 billion, with about a quarter of total production going into cans. (The rest goes into polycarbonate plastics, which end up in everything from water bottles to DVDs.) Bloomberg adds that the three biggest suppliers of BPA to the American market are the chemical/steel giant Saudi Basic Industries Corp.—which is 70-percent-owned by the Saudi government—the German chemical giant Bayer, and Dow, its US rival. Globally, according to the US Department of Agriculture, Bayer and Dow produce “the bulk” of BPA.

While executives of these companies had reason to cheer the FDA’s decision, consumers have reason to groan. The FDA’s own research shows that BPA leaches from can linings into food, and a 2011 Harvard study found BPA at heightened levels in people who regularly consume canned soup.

BPA is what is known as an endocrine disrupter, meaning that it has a range of effects on human development even at minute doses. Friday’s decision comes less than a month after the release of a major study of endocrine disruptors by a range of scientists, including some from the US Department of Health and Human Services, who found “strong evidence” that BPA negatively affects the prostate at low doses and “undisputed evidence” that it does so for mammary glands.

That’s not all. A 2008 study published in the Journal of American Medicine looked at urinary BPA levels in 1,455 US adults and examined health outcomes controlling for “age, sex, race/ethnicity, education, income, smoking, body mass index, [and] waist circumference.” The result: The higher the BPA concentration in people’s urine, the higher their incidence of cardiovascular trouble and diabetes. Of course, correlation is not causation—something besides BPA could have caused the increase in health troubles. But given that the scientists controlled for a range of obvious factors, and that BPA has proven hazardous in the laboratory, those results give plenty of reason for alarm.

Now, it’s true that there remains a good amount of uncertainty in the science of endocrine-disrupting chemicals, which is relatively new. The FDA seized upon that uncertainty to justify its decision. “While evidence from some studies have raised questions as to whether BPA may be associated with a variety of health effects, there remain serious questions about these studies, particularly as they relate to humans,” the agency wrote in a statement. But as Time‘s Bryan Walsh put it, “For most public-health advocates, chemicals like BPA should be guilty until proved innocent—and they feel there’s more than enough data out there to cast doubt on BPA’s innocence.”

It’s worth noting that alternatives to BPA are already out there and working, as my colleague Kiera Butler showed back in 2010:

In 1999, Eden Foods, which sells organic goods, began lining most of its cans with a plant-based oleoresin. CEO Michael Potter calls the switch a “no-brainer,” even though the new cans cost 14 percent more. “I eat this stuff,” he says. “And so do my kids.” Canning trade rep [John] Rost dismisses oleoresins as impractical due to shelf-life concerns, but Potter says Eden hasn’t had a single case of contamination. For high-acid foods like tomatoes, which can eat away at oleoresins, companies have turned to those paper-and-aluminum cartons already used to package certain soups. But Potter says he’s not surprised that major food companies and canners are resisting the new options. “They have hundreds of millions of dollars invested in BPA,” he says. “They do not want to change anything.”

The FDA’s scientists may truly believe that it’s prudent public health policy to preserve a status quo in which Americans, including children and pregnant women, continue consuming BPA in everyday foods. Then again, it’s an election year. The Obama White House has not been shy about pushing the agency around for political purposes. And the companies that make BPA, not to mention the food and can manufacturers that have come to rely on it, are no political lightweights.