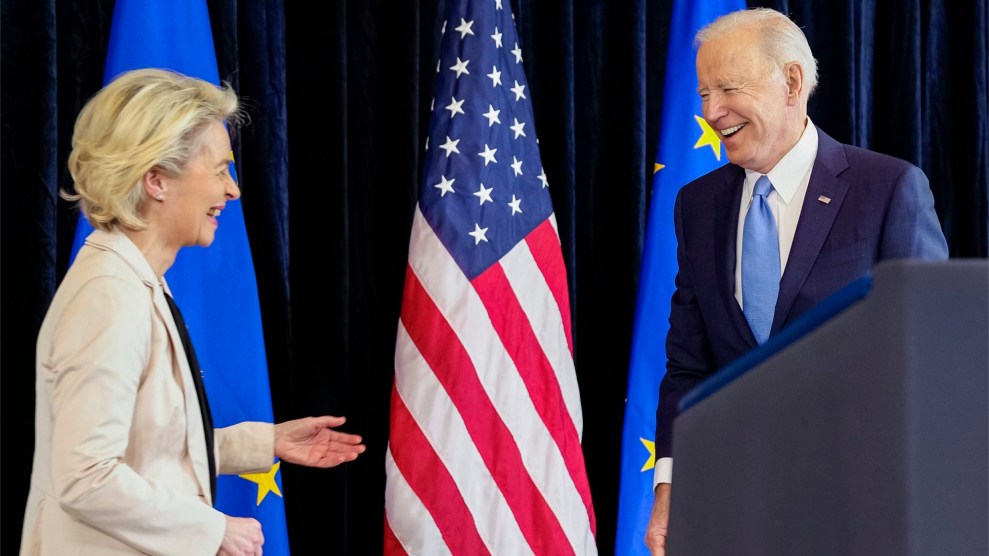 Russia’s invasion of Ukraine seems to be helping the American natural gas industry. President Joe Biden and the European Commission on Friday announced a plan for the United States to ship 50 billion cubic meters of liquified natural gas to Europe annually through at least 2030, more than double current shipments, in what Biden billed as a bid to wean Europe off Russian energy.

The move comes amid steps by policy makers in Washington to loosen natural gas regulations. Those include a decision Thursday by the Federal Energy Regulatory Commission, amid congressional pressure, to roll back a policy that would assess the climate effects of existing natural gas pipelines.

These steps are part of an apparent retreat by Democrats and the Biden administration from the president’s campaign promises to transition away from fossil fuel. That shift is driven by circumstances—Russia’s attack on Ukraine and congressional hostility to his climate proposals—but is nonetheless deeply disappointing environmental to advocates.

The recalibration has reportedly drawn opposition from some within the White House, who object to boosting LNG exports to Europe. And Biden tried to downplay environmental concerns Friday. “This build-out—this build-out will occur in a way that consists—is consistent with, not in conflict with, the zero—net-zero climate goal we—that we’re shooting for,” he said, without explaining.

Gas prices were already soaring. And the stock of US gas companies rose after Biden’s announcement. The US cannot easily increase LNG exports to Europe. Amid high prices, US export facilities are already operating at close to full capacity. But the deal announced Friday was an indication to the oil and gas industry that it will receive support from the once-hostile White House. That is likely to encourage investment in new drilling and infrastructure, including expanded LNG facilities, the Wall Street Journal reported. The joint announcement Friday “sent a powerful signal to the market,” Mike Sabel, chief executive of Venture Global LNG, which runs a new LNG facility in Louisiana, told the paper.

A similar process is expected in Europe. The European Commission pledged to expand facilities to receive LNG shipments. Liquified gas, which must be converted back to gas after shipping, requires different infrastructure to process it than the pipeline-shipped gas European states have relied on from Russia. (Nordstream 2, a heavily-lobbied, planned Russia-to-Germany pipeline, would have left Germany more reliant on Russian supplies, but the Germans shelved the project after Russia’s invasion of Ukraine.)

Environmental groups blasted the administration’s plan for the same reason that oil and gas companies celebrated it. “President Biden campaigned on bold and ambitious goals to tackle the climate crisis and environmental injustice,” Kelly Sheehan, the Sierra Club’s director of energy campaigns, told Bloomberg. “Supporting the push to expand gas exports and lock in decades of fossil fuel production is directly in conflict with these goals.”