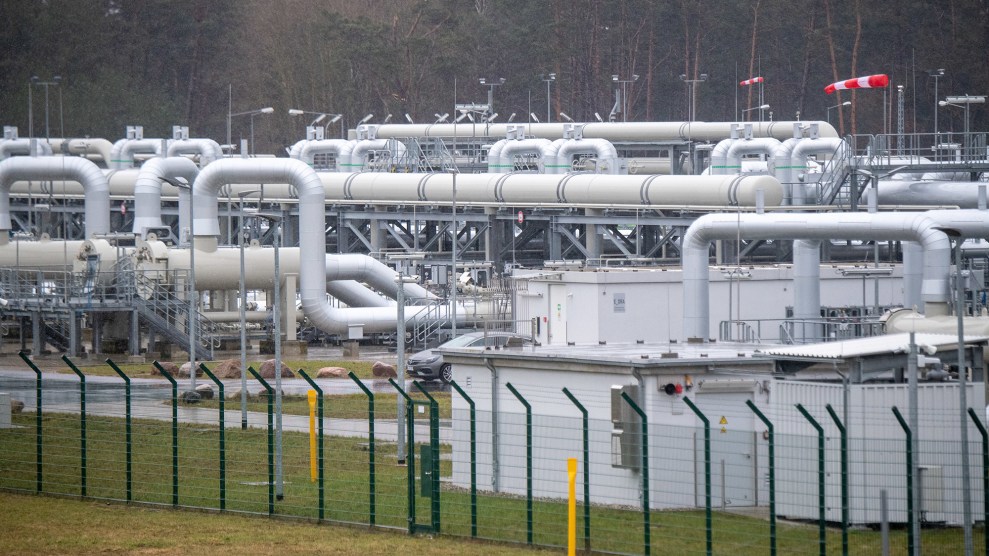 A receiving station on the Nord Stream 2 gas pipeline, which was dropped by Germany after Russia attacked Ukraine.Stefan Sauer/Zuma Press

The Ukraine crisis has plunged Germany into an intense debate about how it will heat its homes and power its industry in future, summed up in the short question: cCn Europe’s largest economy function without Vladimir Putin’s gas?

The Green federal economics minister, Robert Habeck, answered with a decisive “yes, it can,” a day after the chancellor, Olaf Scholz, announced the suspension of the Nord Stream 2 pipeline, which was meant to deliver from Russia as much as 70 percent of Germany’s gas requirements. There are considerable doubts as to whether the $11 billion project will ever now go ahead.

But even before Russian troops invaded Ukraine on Thursday morning, NS2 was just a small part of the wider discussion some say Germany has been far too slow to have. At stake is nothing less than the future of German—and by extension European—energy security.

Germany announced its withdrawal from nuclear power after the 2011 Fukushima disaster, and in 2019 said it would pull the plug on coal-fired plants, leaving observers wondering how the country was planning to make its energy policy workable and future-proof. Skeptics have questioned how it made sense for Germany to make itself so dependent on Russian gas when it should be distancing itself from Putin’s autocratic machinery. Until recently, the answer from the top of government was that this was an economic project, not a political one. The robotically repeated mantra now sounds at the best naive, and at the worst, given the current turn of events, a self-defeating decision which has helped fund Putin’s war.

“It is utopian to believe that Russian gas can be completely replaced from one day to the next by other sources.”

Habeck admitted “we face turbulent days ahead,” as he promised on Wednesday that the government would provide relief where necessary to compensate for the expected rise in gas prices. One of the government’s main predicaments is whether it can deliver on its promise to make a switch to renewable energy sources in order to reach its climate goal to become carbon neutral by 2045. Gas is seen as the vital bridge in that endeavor, which, while seen as ambitious by international standards, is viewed by many climate experts as barely adequate.

Importing liquified natural gas has been viewed as one option as part of a diversification strategy. However, this has been beset by numerous problems—not least the lack of a terminal in Germany necessary to handle LNG imports. Neither would available LNG supplies be able to fully replace Russian gas and it is also an expensive alternative. Gas already comes from Norway, but those supplies cannot be increased as it is already producing to capacity.

Leonhard Birnbaum, the CEO of Germany’s biggest gas and electricity provider, E.ON, said that while energy supplies for this winter were secure, next year could be more of a challenge. “If Russian gas imports were to break down completely, the immediate effect wouldn’t be so dramatic as we’re almost at the end of the heating season. But next winter it could be the case that we’re not able to meet the supply demands of all the industrial customers. Some of them may have to turn off the power. It is utopian to believe that Russian gas can be completely replaced from one day to the next by other sources,” he told Die Zeit.

Other critics have said Germany only has itself to blame, having dillydallied on its much vaunted plans to switch from fossil fuels to renewables. A positive headline to emerge from the recent heavy storms which hit much of northern Europe, was the record amount of energy fed into the grid by its wind turbines on Sunday. But it also served to underline how slow the development of renewables has been.

Beyond Germany’s borders the short-term answer is thought to be simple: Why not reverse the decisions, or at least prolong the use of coal-fired power plants and temporarily restart the nuclear reactors?

But these options are seen as politically suicidal in Berlin—in particular the reactivation of nuclear plants (as well as being highly impractical and disastrous from a legal point of view). Opposition to nuclear was the founding principal of the Green party—two of whose former leaders, Habeck and the foreign minister, Annalena Baerbock, are now in government. Both have always opposed the pipeline.

“The trust is no longer there,” one energy economist noted. “Russia has shot itself in the foot.”

There is no evidence of ordinary Germans panicking, although heating installation companies say there has been a considerable increase in inquiries about heat pumps from people keen to find an alternative to the gas central heating.

“In the short term it won’t be easy to move away from natural gas,” Hans-Martin Henning, the head of the Fraunhofer Institute for Solar Energy Systems, told Tagesspiegel. “But in the medium term this must be part of the concept of speeding up the energy source switch in the heat sector and wherever possible electrical heat pumps should be used as a way of becoming more independent from natural gas.”

Andreas Löschel, an energy economist, told the same newspaper that even before the Ukraine crisis, Russia had destroyed its own narrative about being a reliable provider of cheap gas. “The trust is no longer there,” he said. “Russia has shot itself in the foot.”

Just days ago at a press briefing with Scholz in Moscow, Putin heaped praise on Scholz’s fellow Social Democrat Gerhard Schröder, the former German chancellor turned lobbyist for Gazprom, saying he was responsible for brokering generous fuel rates. It was one of Schröder’s final acts in office in 2005 to sign the NS2 deal before he was appointed chairman of the company behind it.

On Thursday calls were growing for the government to remove Schröder’s privileges as a former chancellor, including an office and staff, amid reports they cost the taxpayer more than €400,000 (about $451,000) a year, on top of his considerable earnings from lobbying for companies including Rosneft and Gazprom. An online petition said a “former chancellor who is financed by autocrats, and makes himself dependent on them, in so doing ridiculing German interests, should no longer be financed by the German taxpayer.” Some politicians called for him to be added to the list of individuals facing sanctions.

Writing on the LinkedIn platform, Schröder said although “many mistakes” had “been made on both sides” in the relationship between the west and Russia, Russia’s “security interests did not justify its intervention by military means.” He called on the Russian government to “end the suffering of the people in Ukraine as soon as possible.” He also warned against “cutting the remaining political, economic and societal connections” between Europe and Russia.