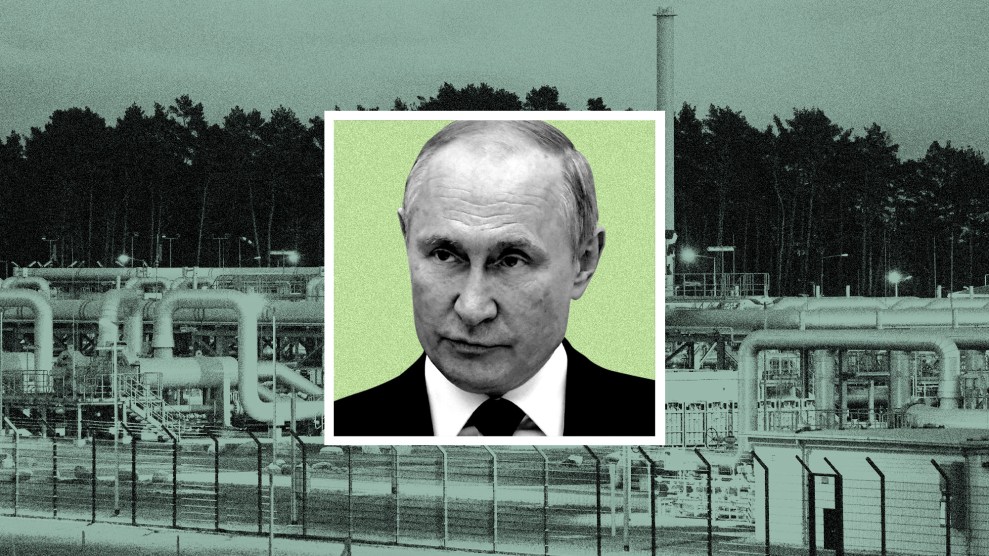 As Vladimir Putin threatens Ukraine, the fate of a 764-mile pipeline under the Baltic Sea has become a top US foreign policy concern—and one of Washington’s most heavily lobbied issues. Last month, backers of the pipeline, which would allow Russia to sell natural gas directly to Germany, got a win when the Senate failed to pass a bill that would have imposed sanctions intended to block it. But the public may never know details of how that legislative victory came about, because advocates for the pipeline are sidestepping foreign lobbying disclosure laws.

President Joe Biden declared last week that the not yet operational pipeline, called Nord Stream 2, will not move forward if Russia invades Ukraine. Congress had previously instituted an earlier round sanctions aimed at stopping the project. Biden last year lifted those sanctions under pressure from Germany, which is eager for the cheap gas Nord Stream will provide. In January, a bill offered by Sen. Ted Cruz (R-Texas) that would have imposed new sanctions fell short of 60 votes it needed. At the urging of the White House, most Democrats opposed that measure.

All these political machinations reflect an American consensus that the pipeline—which is owned Gazprom, a Russian state-controlled company—will benefit Russia by allowing it to more effectively leverage its energy supplies to influence western European states. But the DC lobbyists who have spent the last few years fighting to block sanctions on Nord Stream contend that they do not work for Russia, but rather for private commercial companies. And they are using that claim to keep key aspects of their advocacy work under wraps.

Legally, this is a complicated issue, but the upshot is pretty simple. Lobbyists working in Washington to advance a Russian foreign policy priority, which is closely tied to Russia’s threat to invade Ukraine, are operating in relative secrecy, despite US laws intended to make such foreign advocacy is transparent—because those laws remain weak and easily evaded.

BGR Government Affairs, a well-heeled lobbying shop founded by former Ronald Reagan aide Ed Rogers; Roberti Global, a firm run by Vincent Roberti, a big Democratic donor; and McLarty Inbound, a firm led by Richard Burt, whose Russian ties and work for Donald Trump’s 2016 campaign drew attention from special counsel Robert Mueller, are earning fees lobbying in Washington for the pipeline. By asserting their work is not for a foreign government, they have avoided registering with the Justice Department under the Foreign Agents Registration Act, known as FARA. That law, which dates to the 1938, was written to ensure that agents promoting foreign interests in the United States do their work transparently. FARA requires registrants to publicly report all their lobbying contacts with Congress and the executive branch, twice a year, along with other details of their advocacy efforts.

But the three firms are instead registered under the Lobbying Disclosure Act, which requires far less transparency. Rather than disclosing each lobbying contact with US officials, as they would have to do if they were registered under FARA, these firms need only file quarterly forms that note the fees they received and name the lobbyists on the account. They do have to list “specific lobbying issues” they worked on, but the answers are always extremely general. BGR’s uniform description in its relevant filings is: “Issues related to the U.S. position toward the Nord Stream 2 pipeline.”

Given the attention the Nord Stream pipeline is receiving, that evasion represents a glaring failure in lobbying disclosure laws, critics contend. “When you have this international lobbying fight that rises to this level of importance in US foreign policy, it’s critical that we have the higher level of transparency that FARA requires,” said Ben Freeman, a research fellow at the Quincy Institute for Responsible Statecraft who studies foreign influence. “This is why FARA exists.”

BGR, Roberti Global, and McLarty all declined to detail their legal reasoning or to comment on their work. But experts on lobbying law argue that they are exploiting a loophole in FARA. They seem to be taking advantage of an exemption that applies for lobbying related to the trade or commerce of a foreign client. BGR and Roberti are registered as lobbyists for Nord Stream 2 AG, a company officially based in Switzerland. Gazprom, the Russian state-run gas company, owns Nord Stream. But both firms say in public filings that Gazprom is only 38-percent owned by Russia. Thus they are asserting they work for an independent commercial client, not for the Kremlin. McLarty Inbound is registered separately as a lobbyist for five European companies that lent money to Nord Stream to fund the pipeline.

By contrast, lobbyists advocating against the Nord Stream pipeline are registered under FARA. Yorktown Solutions, which works for the Ukrainian Federation of Employers of the Oil and Gas Industry, has registered as a foreign agent for Ukraine, which Nord Stream would bypass. Ukraine is eager to maintain the revenue it derives from gas that now passes through it en route to western Europe. Yorktown is led by Daniel Vajdich, a former Cruz aide. And press reports have noted that Vajdich lobbied his former boss and other senators, who sponsored 2020 legislation to block completion of Nord Stream. That might strike some people as unseemly, but it’s only public information because Yorktown registered under FARA. Lobbyists on the other side of the issue have not done so, leaving it unclear what exactly they are doing in support of the pipeline.

Even with that massive loophole in FARA, some experts argue that the pipeline lobbyists probably should register as foreign agents. The law at issue says that firms can claim they are exempt from FARA “only” for “private and nonpolitical activities in furtherance of the bona fide trade or commerce” of a foreign client. The pipeline is the subject of high-profile congressional legislation, and it’s involved in US-Russia talks aimed at stopping a war. Given that, “it’s hard to imagine that if you’re working for Nord Stream, you’re not engaging in political activity,” Freeman said.

Also, FARA regulations state that firms may not register under the less-stringent Lobbying Disclosure Act instead of FARA if “a foreign government or foreign political party is the principal beneficiary” of their lobbying. If you believe Russia will be the principle beneficiary if Nord Stream starts pumping gas this year, then the firms should be registered under FARA.

But the big problem here, lawyers familiar with the law said, is that FARA is dated, vaguely written, and hard to enforce.

“It is in need of clarity,” said Amy Jeffress, a partner at Arnold and Porter who does FARA work. “I think everyone agrees the statute is confusing and in need of reform,” Jeffress said, citing the consensus from a recent conference on FARA.

Whether or not the pipeline lobbyists, under the letter of the law, should register under FARA, they have little incentive to do so. Despite recent high-profile prosecutions by Mueller that involved FARA violations, charges for violating the law are relatively rare. That means there is little case law defining how it applies. Prosecuting FARA violations also requires showing that defendants knew they should have registered. But given the lack of clarity around when the commercial exemption applies, deep-pocketed lobbyists can easily find lawyers who will give them an opinion that says they need not register, making prosecution nearly impossible. And the DOJ’s FARA office can’t even levy fines on violators. All it can do is tell firms that they should register. If that happens, the firms can do so, retroactively, with no penalty for dragging their feet.

Mueller’s investigation appeared to cause an increase in FARA registrations, and the FARA unit, in recent years, stepped up enforcement efforts. But critics argue that until Congress gives the FARA office the power to fine firms that fail to properly follow the law, lobbyists can continue to evade FARA without repercussions. And even firms that comply often fall short of the law’s requirements, routinely filing forms late and leaving out details of their lobbying.

The Trump-Russia scandal and the focus it put on foreign influence efforts led to a series of FARA reform proposals in Congress. But, due in part to the partisan divide over that scandal, none have come close to enactment. Asked about the Nord Stream lobbying, a spokesperson for Chuck Grassley (Iowa)—the top Republican on the Senate Judiciary Committee—cited legislation the senator has offered aimed at strengthening the law. The bill includes a provision that would give the DOJ power to impose civil penalties of up to $200,000 on firms that flout the law’s requirements. “For years, Sen. Grassley has engaged in robust congressional oversight of FARA and advocated for changes in the law aimed at closing loopholes that foreign agents can all-too-easily exploit,” the spokesperson said, adding that Grassley’s proposal would “ensure lobbying campaigns being pushed by foreign interests are exposed to the American public and Congress.”

The Justice Department is also considering overhauling some FARA regulations without help from Congress. But for now, the pro-Nord Stream lobbying campaign remains shrouded. This opacity may actually lead critics to overstate the influence that Russian interests are exerting for Nord Stream. People familiar with the pipeline issue said that Germany, through its embassy—rather than Russia and Nord Stream lobbyists—has been the pipeline’s most effective advocate in Washington. It was mostly Germany that persuaded the White House to push Democrats to sink Cruz’s sanctions bill last month, those sources said.

Since the start of 2020, Roberti Global reported receiving more than $5 million, and BGR $1.6 million, for their lobbying for Nord Stream, Open Secrets recently reported. McLarty Inbound received more than $1.6 million over the same period for Nord Stream pipeline lobbying. These pipeline lobbyists are surely telling their clients they did something to earn those fees. But exactly what is a secret.