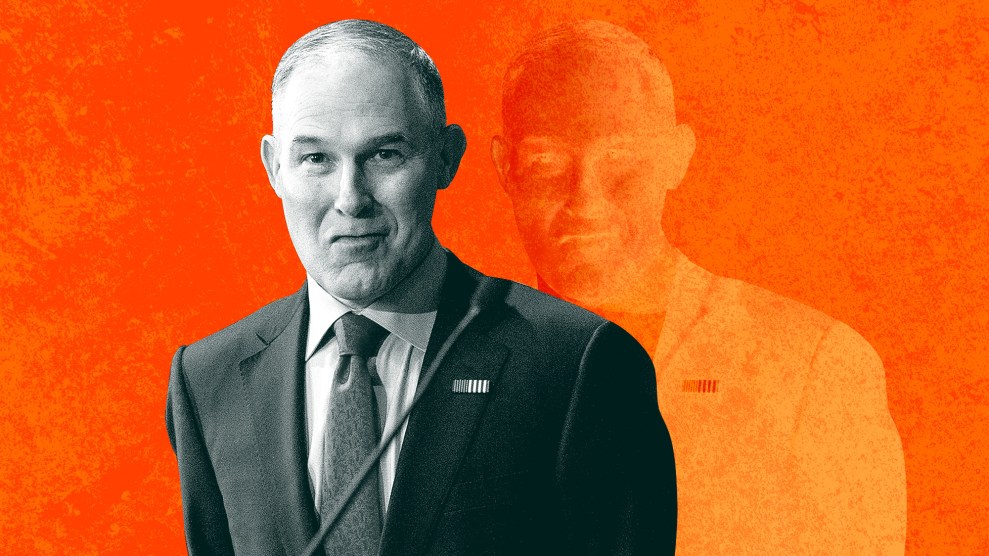 Taking expensive first-class flights, doling out pay raises from a clean water law, renting a condo from an energy lobbyist’s wife: These are just a few of the scandals that have recently dogged EPA Administrator Scott Pruitt. Pruitt has reportedly lost favor among President Trump’s White House staff. Two Florida Republicans in the US House facing vulnerable midterm elections have now called on Pruitt to resign, and progressive groups last week launched the first coordinated campaign to boot him from office. Trump, meanwhile, called Pruitt on Monday night to reassure him “we have your back.”

For much of the past year, Pruitt has been Trump’s trusted partner in realizing the president’s campaign promise to reduce the EPA to “little tidbits.” And Pruitt continues to carry out that vision in the face of his controversies, reversing an Obama-era environmental regulation that doubled mileage standards for cars and floating a plan to bar the use of air pollution studies to justify EPA regulation. Pruitt has overseen a drop in environmental enforcement, appointed industry allies to reverse dozens of regulations, erased climate change from the EPA’s responsibilities, and circulated internal skeptic-friendly talking points on global warming.

His use of taxpayer funds may have captured the public’s attention more than his environmental policies. But controversy isn’t new for Pruitt.

As attorney general of Oklahoma from 2011 to 2017, Pruitt fostered close ties with industry interests, including Koch-funded groups, oil and gas, and agriculture. He used his position as attorney general to advance these interests, copying their language to use against Barack Obama’s EPA, while he benefited from their political support and campaign donations. He targeted the Humane Society’s nonprofit tax status, which the group’s President Wayne Pascell said was motivated by its feud with the Oklahoma Farm Bureau, a Pruitt ally. The AG’s office was slow to release emails that detailed the full extent of Pruitt’s close ties with industry, only making some emails public after a court order that was issued the same day he was confirmed by the US Senate for the EPA.

Pruitt already had a lengthy record of scandals when Trump picked him for the EPA. The controversies have ballooned as Pruitt has pursued his ambitions for higher national office.

Living in a lobbyist’s condo: ABC News reported that Pruitt has been renting an apartment for $50 a night over six months from Vicki Hart, whose husband Steven Hart is registered to lobby on behalf of energy companies. Pruitt’s daughter rented a second room in the condo that the EPA had at first denied was in use. In March, the EPA signed off on an Enbridge pipeline, according to the New York Times, which is a client of Hart’s firm.

Controversial hires:  Pruitt has stacked the EPA with industry representatives and Oklahoma friends. One of those hires was Albert Kelly, a former banker whose company issued mortgages to the Pruitt family and financed Pruitt’s stake in a minor league baseball team. Kelly was later banned from the banking industry for his alleged involvement in a loan that hadn’t received FDIC approval, around the same time Pruitt hired him to lead the EPA’s Superfund Task Force.

Pay raises for staff: According to The Atlantic, Pruitt wanted pay raises for two of his EPA staff, Sarah Greenwalt and Milian Hupp, who had worked with him in Oklahoma. The White House declined his request for the raises, to $164,200 and $114590 respectively, but Pruitt doled them out anyway by using funds appropriated to the Safe Water Drinking Act, though their duties remained unchanged.

Betsy Southerland, a career staffer who worked for the Office of Water before she resigned last June, tells Mother Jones that this scandal has caused a “big uproar” among EPA staff. Staff had already learned that Pruitt had hired a chemical industry lobbyist, Nancy Beck, using the Safe Drinking Water hiring authority, who then rewrote chemical safety rules. “Using this same hiring authority to reward those two [political appointees] with huge raises shows that Pruitt plans to bleed the taxpayers for everything he can get access to,” Southerland says.

Use of taxpayer funds: Pruitt has cited his expensive jet setting as a bragging point, to showcase “leading by listening.” But the frequency of his first-class travel has become a sticking point: A summer trip to Rome cost around $120,000, $30,559 of which was for Pruitt’s ever-present security detail. The EPA administrator also took $58,000 in chartered and military flights over the summer, and nearly $40,000 on a trip to Morocco to promote natural gas exports. He installed a second private phone booth in his office (at a higher cost than initially reported, at $43,000), and issued a $120,000 contract to a Republican opposition research fund to track and target journalists, which was canceled after Mother Jones’ reported on the contract.

Industry ties: Congressional Democrats have highlighted that Pruitt possibly violated anti-lobbying ethical rules on multiple occasions by asking industry representatives to show their support for rolling back Obama initiatives. He appeared in a video last summer for the National Cattlemen’s Beef Association calling on ranchers and farmers to submit public comments on the clean water rule he was reviewing. He also called on coal miners to tell Trump to withdraw the US from the Paris climate agreement, when the president was still debating his decision last spring. Last year, Pruitt met with the industries he’s charged with regulating 18 times more often than public health and environmental advocates.

His emails: At his Senate confirmation hearing last year, Sen. Cory Booker (D-N.J.) asked Pruitt if he used a private email as attorney general. Pruitt answered he did not. Shortly after, Oklahoma reporter Phil Cross found that Pruitt had used a non-government email address in publicly released records. On top of the private email, groups such as the Oklahoma chapter of the American Civil Liberties Union are still fighting for the remainder of Pruitt’s emails with industry groups like Devon Energy. An earlier batch of emails revealed that Pruitt’s Oklahoma office thanked a Devon staffer with messages like, “You are so amazingly helpful!!!” while adopting much of Devon’s language as its own for a letter opposing Obama’s attempt to rein in methane leaks from drilling operations.

The warning signs that Pruitt would be an ethical nightmare in the Trump administration were already apparent from his time in Oklahoma. Take, for example, the RedHawks, a minor league baseball which he bought with a loan from Albert Kelly’s bank. As I explained in a recent profile of Pruitt:

In 2003, while he was still in his state seat, Pruitt returned to his first love by becoming the co-owner and managing general partner of the RedHawks, a minor league baseball team based in Oklahoma City. Why might a legislator from Tulsa want to run a baseball team in Oklahoma City? Blatt, who now heads Oklahoma Policy Institute, a nonpartisan think tank, says it made sense in the context of Pruitt’s ambition: “Owning the RedHawks would have definitely cemented relationships with the business elite of Oklahoma City and some of the oil industry folks.”

Brady Henderson of the ACLU Oklahoma observed that Pruitt may feel he has now accrued enough political capital with industry allies that he can get away with the controversy, an overconfidence he may have picked up long before the Trump administration. Henderson pointed to Pruitt telling Congress that he didn’t use a private email as attorney general, when email records prove he did. “I think it’s very possible,” Henderson says, “to have enough confidence in that to say, ‘Yeah, I’m just going to lie, and who’s going to do anything about it?’ I think that’s very much the Trump mantra if you think about it.”