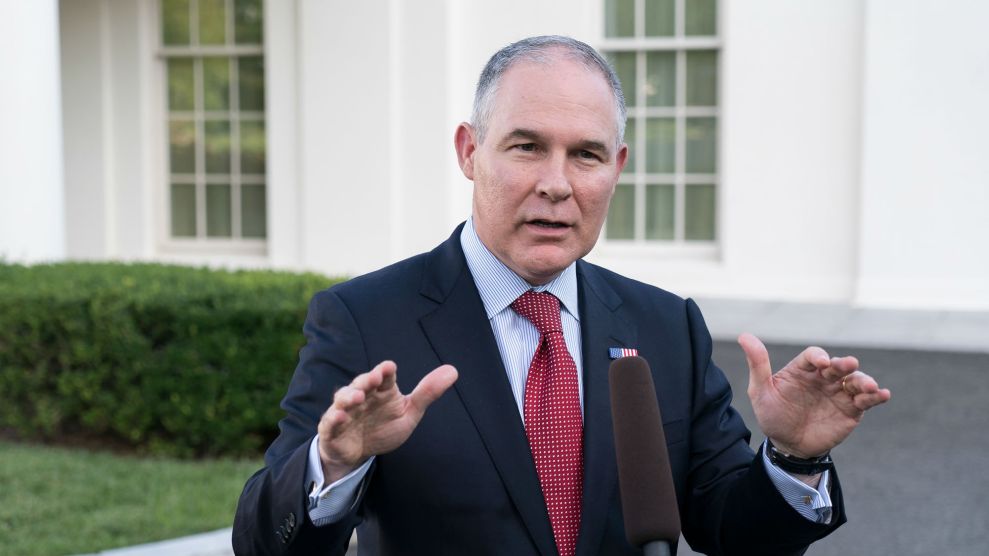 According to federal contracting records, earlier this month Pruitt’s office inked a no-bid $120,000 contract with Definers Corp., a Virginia-based public relations firm founded by Matt Rhoades, who managed Mitt Romney’s 2012 presidential campaign. Following Romney’s defeat, Rhoades established America Rising, an ostensibly independent political action committee that works closely with the Republican National Committee and Republican candidates to mine damning information on opponents. Other higher-ups at Definers include former RNC research director Joe Pounder, who’s been described as “a master of opposition research,” and senior vice president Colin Reed, an oppo-research guru billed as “among the leaders of the war on [Sen. Elizabeth] Warren.”

This for-profit consulting firm offers a variety of public relations services such as digital strategy, political consulting, and media relations. According to its website, Definers’ clients include Fortune 500 corporations, political groups, and nonprofits. In the past, both Marco Rubio and John McCain used their services, and since the 2016 election so has Rep. Diane Black (R-Tenn.). The client list for America Rising includes the RNC, Republican candidates such as Sen. Pat Toomey (R-Penn.), and super-PACs such as the Mitch McConnell-linked Senate Leadership Fund and Karl Rove’s American Crossroads.

The company also specializes in using the press and social media to “validate your narrative.” According to the company’s website, one of the tools to help do this is its “Definers Console” media-tracking technology. Reed said his firm contracted with Pruitt’s office at the EPA, which is the first governmental client to pay for the Definers Console. The technology promises “war room”-style media monitoring, analysis, and advice, according to marketing materials. A brochure for the Console assures users that they will be able to “monitor for potential crises, as well as to track their message dissemination, relevant responses to their messaging, and what competitors’ actions have been.”

Users will be able to “monitor for potential crises, as well as to track their message dissemination, relevant responses to their messaging, and what competitors’ actions have been.”

Besides monitoring media, users will get analysis and input from their employees whose experience in political campaigns and the business world helps create a unique approach “to intelligence gathering and opposition work. This experience informs the way we gather, synthesize, and disseminate information.”

“Definers has been contracted to provide media monitoring services through our Console by the EPA,” Reed says. “We provide the same service to a number of corporate and non-profit organizations.”

USASpending.gov, a website that tracks federal spending, shows that in early 2016 the EPA signed a $207,000 contract with a firm called Bulletin Intelligence, requesting similar services. Bulletin is owned by public relations giant Cision, a well-known international PR firm. According to OpenSecrets.org’s expenditure data, Bulletin is not political and has not done any recent work for any candidates or PACs. The contract expired in February.

The career of at least one of Pruitt’s staffers has overlapped with the Republican operatives at Definers. Jahan Wilcox, who previously worked for Marco Rubio’s presidential campaign and in rapid response for the Republican National Committee, is now a spokesperson for the EPA.

Wilcox, along with other political staff in Pruitt’s EPA press shop, has had some contentious interactions with the press. In one case, when Eric Lipton from the New York Times was confirming facts for an investigation into the EPA’s industry-friendly approach to chemical regulation, EPA spokesperson Liz Bowman diverted the discussion to other outlets’ reporting rather than confirming his questions. Wilcox added, “If you want to steal work from other outlets and pretend like it’s your own reporting that is your decision.”

On another occasion, shortly after the Associated Press reported on the Superfund sites affected by Hurricane Harvey, the EPA went after one of the bylined reporters in a statement, and an unnamed official later admitted to removing one of the bylined AP reporters from the agency’s press list, saying, “We don’t think he’s a trustworthy reporter.”  When Pruitt has faced criticism, the EPA highlights friendlier stories from conservative outlets—including Breitbart.

Pruitt has come under fire for a general lack of transparency at the EPA. The latest example is his trip promoting natural gas in Morocco. The public learned of his travels when his office posted a media release, causing confusion over why the EPA would not notify reporters ahead of time. This means that information on Pruitt’s activities in Morocco will be restricted to the EPA’s own spin.

The EPA’s work with groups affiliated with Pounder predate this contract. On a handful of occasions, the EPA has promoted positive coverage of Pruitt’s actions from the news-aggregation website Need To Know Network. Earlier this year, the website wrote a series of stories designed to shed positive light on the controversial administrator. In one story, the site describes Pruitt as “busy racking up accomplishments that both protect Americans and save millions in taxpayer dollars.” Another congratulated Pruitt for moving ahead with plans to open Alaska’s Bristol Bay to mining, writing it was “a move that will prove to be a massive job creator for President Trump and Pruitt.”

The Need to Know Network was started by Pounder and other operatives connected to America Rising and Definers Corp.