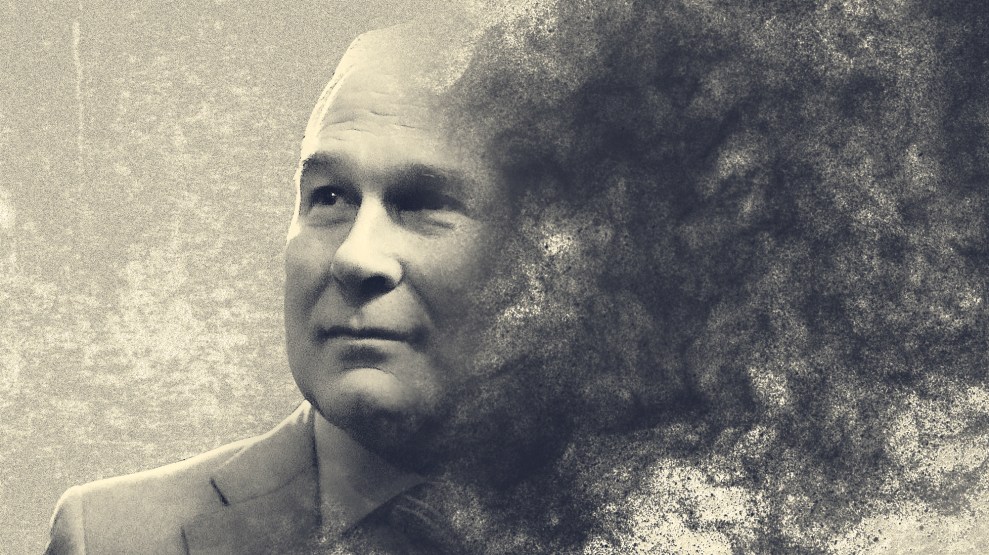 It’s been one year since Scott Pruitt took control of the Environmental Protection Agency. In that time, he’s undermined dozens of regulations on air and water pollution, made major cuts to agency staff, and curtailed enforcement of environmental rules. Here’s a look at his disturbing record so far:

Greenhouse Gas Limits: Declaring “the war against coal is over,” Pruitt announced the EPA would repeal President Barack Obama’s Clean Power Plan, which would have placed limits on carbon pollution from power plants—a major cause of global warming.

Clean Water Protections: Pruitt has rescinded the Waters of the United States rule, which gave the agency wider latitude to regulate pollution.

Oil and Gas Drilling: After “hearing from industry,” Pruitt canceled the EPA’s 2016 directive that energy companies provide information on methane emissions from their drilling operations.

Hazardous Air: The EPA withdrew a 1995 policy that imposed limits on nearly 200 pollutants, including arsenic, lead, and mercury, from major industrial polluters.

Hazardous Chemicals: Pruitt has delayed an Obama-era rule requiring plants to release inventories of chemicals on hand—key information for first responders in the event of an accident.

Fuel Efficiency Standards: The EPA is reviewing tougher fuel standards established under Obama—standards that Pruitt calls “costly for automakers and the American people.”

Smog: The Obama administration strengthened limits on ozone pollution, which causes smog. Pruitt has yet to enforce the rule.

Toxic Power Plant Pollution: The EPA is rethinking limits on chemicals like arsenic, lead, and mercury that power plants dump into waterways. The agency could revise a rule restricting mercury and other toxic pollutants in the air.

Climate Denial: Pruitt says he doesn’t think humans are a “primary contributor” to global warming, and he has proposed a series of “debates” designed to challenge mainstream climate science.

Dangerous Pesticides: The EPA plans to revise an Obama-era rule that prevents farmworkers younger than 18 from applying pesticides. Pruitt has also refused to ban chlorpyrifos, a pesticide that can damage the nervous system—despite agency scientists saying a ban was warranted.

Coal Ash: Under Obama, the EPA set national standards for the disposal of toxic coal residue. Pruitt has granted an industry request to reconsider the rule.

Global Climate Accords: After a bitter debate among top advisers, President Donald Trump sided with Pruitt and Steve Bannon, announcing he would withdraw from the Paris climate accord.

Abandoning Enforcement: According to the Environmental Integrity Project, Pruitt has slashed the number of civil cases filed against polluters by 44 percent and civil penalties have fallen by almost half, compared with averages from the Obama, Bush, and Clinton administrations. Officers who once investigated environmental crimes are now manning Pruitt’s security detail, the Washington Post reports.

Politicizing the Grant Process: Pruitt assigned a former Trump campaign aide to review all EPA grants, according to the Post. The aide, John Konkus, directed staffers to remove references to climate change from grant solicitations.

Stacking the Agency With Industry Allies: In a move critics called “scientific censorship,” Pruitt announced that scientists who receive EPA grants can no longer serve on the agency’s advisory boards. Seven board members immediately resigned and were replaced with industry-friendly scientists.

Slashing Staff and Hiring Cronies: Under Pruitt, the number of EPA staffers has fallen by more than 800. According to ProPublica and the Times, that loss includes 200 scientists, most of whom haven’t been replaced. Meanwhile, Pruitt has hired longtime friends and acquaintances.