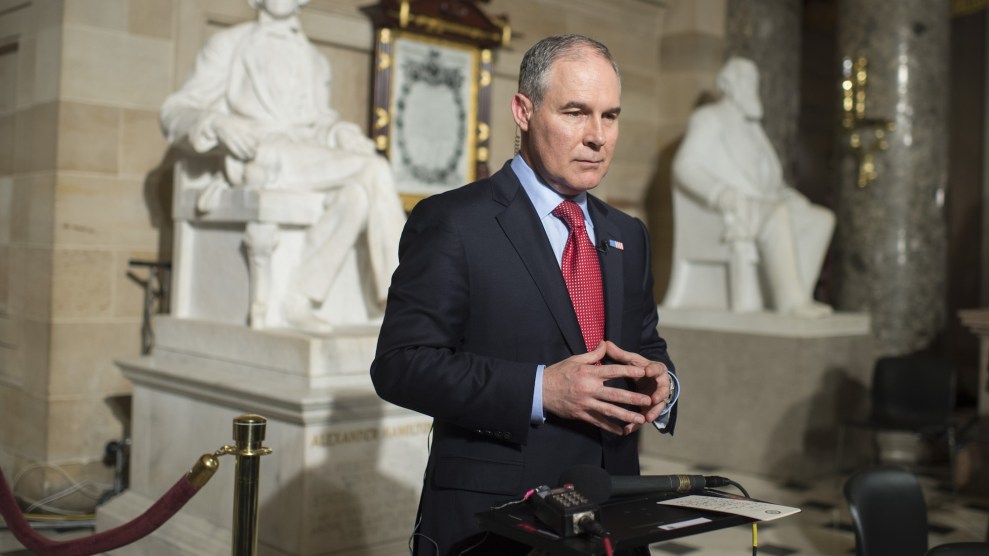 As EPA Administrator Scott Pruitt faces a growing set of ethical allegations, he won’t be taking many questions—the EPA is continuing to withhold routine information about the administrator’s public appearances and schedule.

Despite the questions that remain about the pay raises he approved for staff, his arrangement renting a condo from a lobbyist, and the slew of other questions about his ethics and his policy from the past year, Pruitt has carried on as always, turning to conservative media this week to diffuse a difficult news cycle. He’s been interviewed by a Washington Examiner columnist and the Heritage Foundation’s blog, the Daily Signal, notes the media watchdog nonprofit Media Matters. On Wednesday, Pruitt went on Fox News to deny he knew about the substantial pay raises to his staff using a clean water law to circumvent the White House (The Atlantic reported that he signed off on the salary orders).

When the EPA held an event Tuesday to announce its reversal of Obama-era fuel economy standards that would have doubled the mileage efficiency of cars by 2025, the agency tweeted a link for its followers to watch the live-streamed event. Most EPA beat reporters were not invited, and the EPA did not answer my emails regarding the event. Fox News was the only network invited, CNN reported. These challenges aren’t new to reporters who’ve been covering the EPA: The agency has stopped sharing the administrator’s schedule, and that of his senior staff, which is a departure from past administrations.

As the Society of Environmental Journalists (of which I’m a member) recently reminded the EPA’s Office of Public Affairs, this is not the usual standard for a government agency. In a letter sent to the EPA on January 22, SEJ outlined recommendations for how a transparent EPA should function: Holding open press briefings, announcing Pruitt’s public appearances, keeping an updated calendar of his schedule, and distributing press releases to all who request them.

“If you make information and staff more available to the press as we suggest, you still aren’t likely to be happy with everything you read, see and hear,” SEJ writes. “Such is the nature of government—there are always critics. But only through greater transparency and through engaging with journalists can you effectively make your case, and the public get a better understanding of what you are doing and why.”

Frustration with the agency’s lack of transparency isn’t totally unique to the Trump Administration. SEJ had complaints about Obama’s EPA in 2013. However, Trump’s EPA insists it is more accessible than Obama’s EPA at transparency, despite all the evidence to the contrary.

SEJ President Bobby Magill recently sent the EPA a series of questions about the EPA’s interactions with reporters, referencing times the EPA has sent reporters to information reported in other outlets, rather than answer their questions directly.

The Trump EPA is one of the most widely reported on agencies in the federal government and the Office of Public Affairs has provided regional and national journalists—from the New York Times to the Daily Caller—with an unprecedented amount of access. This is a vast improvement from four years ago when E&E reported that the Society of Environmental Journalists called that EPA an ‘incredibly secretive’ agency.”

The relatively short statement did not address Magill’s primary concern.

I’ve experienced this firsthand. Last fall, when I asked for a press release and information regarding Pruitt’s decision to roll back the Clean Power Plan, EPA’s Bowman replied, “All our press statements are posted on our public website; everything is there for the press/public to read at any time and easily searchable.” When I sent the EPA a series of questions for my profile of the administrator, the EPA sent me a series of links to other outlets’ stories. Some of my questions were about the lack of transparency at the EPA, to which Jahan Wilcox responded by pointing to Talking Points Memo’s presence at a roundtable with Pruitt last fall. TPM reporter Cameron Joseph noted in his story on the event that fewer than a dozen reporters were invited. “Some of them,” he wrote, “including TPM, rarely if ever cover the environmental beat closely—a fact that frustrated some environmental reporters who weren’t invited to attend.”