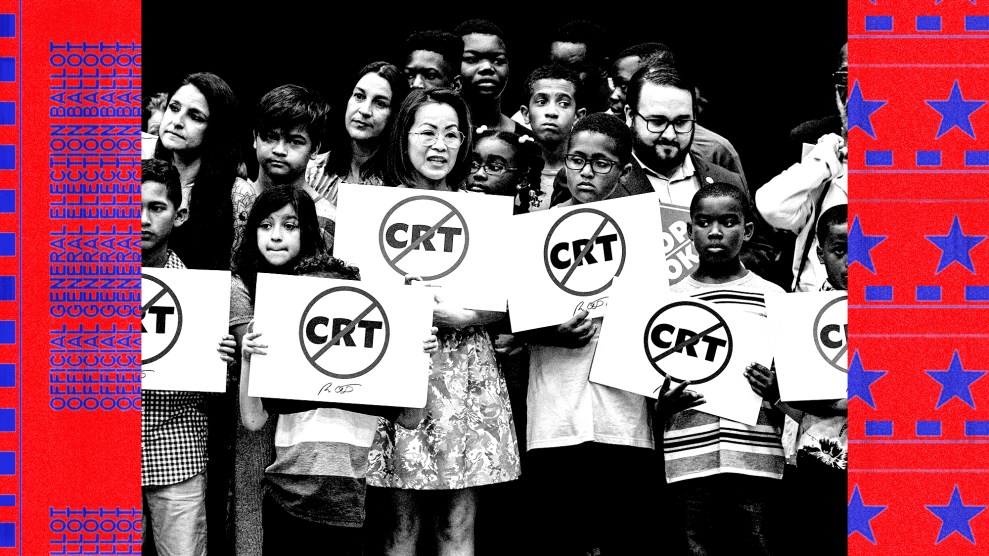 As he delivered his landslide reelection victory speech Tuesday evening, Gov. Ron DeSantis repeated one of his favorite battle cries: “Florida is where woke goes to die.” DeSantis has made himself to be the loudest parents’ rights champion, signing legislation to ban the teaching of Critical Race Theory (CRT) and discussions of gender identity and sexuality in schools. In building that political brand, he has not only bolstered his own standing, but also symbiotically propelled a squad of conservative foot soldiers to office—with the help of an army of Moms—where they’ll carry on the mission of eradicating “evil ideology” from the classroom at local school boards. “The DeSantis Education Agenda was on the ballot,” a spokesperson for the governor’s campaign said in a post-election statement to NBC News, “and the voters made their voice clear: We want education, not indoctrination.”

DeSantis has been credited with advancing one of the country’s most sweeping legislations to expand school choice, a conservative agenda promoted by former US Secretary of Education Betsy DeVos to channel public funds to private and charter schools that has been gaining momentum with the proliferation of parents’ rights groups nationwide. The unprecedented involvement of the Republican presidential hopeful in local school board races bore fruit. Twenty four out of 30 candidates DeSantis endorsed won elections, including six in the runoffs.

A newly-elected Collier County school board member said he would like to see corporal punishment back in classrooms and fewer “rights” for LGBTQ students.

Not all candidates who have expressed extreme positions needed the governor’s Midas touch to fare well. A newly-elected Collier County school board member, who is not among DeSantis’ endorsees, said after his victory that he would like to see corporal punishment back in classrooms and fewer “rights” for LGBTQ students, according to the Naples Daily News. On his website, Jerry Rutherford says he supports having cameras in the classroom and eliminating “leftist anti-American propaganda” from K-12 education.

But it wasn’t just in Florida or even in local school board races that anti-CRT warriors emerged victorious. In states including Texas, South Carolina, Oklahoma, Nebraska, and Kansas, conservatives running ostensibly on culture wars issues have claimed positions as state board of education members and superintendents of education. Broadly speaking, state boards of education have the authority to set statewide policies and academic and teacher standards, while superintendents oversee the states’ Departments of Education. In some instances, these races presented voters with diametrically opposed contestants: on one side, longtime educators and public school advocates and, on the other, academic freedom and school choice proponents who support voucher programs and homeschooling.

South Carolina is a case in point. Republican Ellen Weaver, a vocal school choice defender and president and CEO of the conservative think tank Palmetto Promise Institute, beat veteran teacher Lisa Ellis to become the state’s next superintendent of education. She ran on promises to expand education choices and enact a parents’ bill of rights, an idea popularized by DeSantis with the “Don’t Say Gay” law. “Parents hold the God-given right and ultimate responsibility for their child’s education,” her campaign website reads. “We must defend their unequivocal right to be fully informed about and make decisions on behalf of their child: educational, medical, or otherwise. South Carolina schools will partner with—not usurp—parents.” As a candidate, Weaver decried the presence of “pornographic” books in school libraries and “wokeism and sexualization agendas.”

In Oklahoma, Governor-Elect Kevin Stitt secured another term in a face off against Democrat Joy Hofmeister, the state’s superintendent of public instruction. Hofmeister will be replaced by Stitts’ pick and current state secretary of education, Republican Ryan Walters, who garnered a higher number of votes in his race than Stitt. A self-described “trusted and proven conservative,” pro-life and Second Amendment supporters, Walters vowed to remove the “dangerous and racist philosophy” of CRT from any curriculum. “In Oklahoma, we’re going to do more than any other state in the country to empower parents,” he said on election night. Both Stitt and Walters have supported a failed proposed legislation to implement a voucher program allowing parents to use public funds to pay for private schools.

Culture wars zealots didn’t succeed everywhere. Some gubernatorial races saw those candidates lose their bids or underperform. At the local level, voters resoundingly rejected the majority of extremist school board candidates in Michigan, where Democrats will have a trifecta with control of the governorship and state legislature for the first time in decades. In Colorado, Democrats held onto their majority in the state board of education, which supervises about 2,000 public schools. This month, the board approved along partisan lines revisions to make the social studies standards more inclusive of marginalized perspectives of Black, Latinos, Asian Americans, Indigenous people, and religious minorities, as required by state law, but not without controversy. Democrats have fended off efforts by Republican board members to replace a civics lessons curriculum developed by experts, teachers, and community members with one centered on “informed and intelligent patriotism” based on a project titled American Birthright by the conservative education coalition Civics Alliance, and Republicans pushed to remove references to LGBTQ people and minority groups.

As of Monday morning, Republican Tom Horne was trailing by a few hundred votes in the contest for Arizona’s superintendent. Horne, who served in that role between 2003 and 2011, waged a battle to ban Mexican-American studies program in the Tucson Unified School District and worked to dismantle bilingual education in favor of English-only instruction. This time around, his priorities include to “get critical race theory out of the schools” and “parental choice.” Horne has also criticized his opponent, incumbent Kathy Hoffman, for focusing on social emotional learning, arguing “teachers are discouraged from disciplining misbehaving students because discipline hurts their feelings” and his idea of teaching accurate history appears to be defined by “patriotism.”

Elsewhere in the country, conservatives are bound to have more sway in statewide policies. Nebraska elected three conservatives to the state board of education. In Texas, where all 15 state board of education seats were on the ballot, 10 Republicans got elected, including several who opposed CRT. Among them was Julie Pickren, a conservative advocate and former board member of the Alvin Independent School District who attended the Jan. 6 rally in Washington, DC. In a candidate survey, she stated support for displaying the Ten Commandments in public school buildings (“Society needs reminders of God’s Law to restore peace, justice, and safety”) and said children should be taught there are only two genders. The new state board of education will play a critical role in updating the social studies standards, an overhaul that has been postponed to 2025 following criticism that proposed changes included controversial issues related to CRT and “de-emphasis of our society’s Judeo-Christian values.”

In Kansas, the state board of education also saw a shift to the right with seven Republicans and three Democrats now making up the 10-member board. Danny Zeck, who received more than 60 percent of votes against the Democrat candidate, opposes transgender students participating in sports consistent with their gender identity and thinks teachers with licenses to carry should be armed in schools. “I’m concerned about some of the extremists who are making their way onto our local and state school boards,” said school principal Sheila Albers, who lost her election for a district covering parts of Johnson County to conservative incumbent Michelle Dombrosky—endorsed by Kansans for Life PAC, which is dedicated to electing pro-life candidates. “I feel there’s an effort to defund our public schools and to not support teachers as professionals in the classroom, which I think ultimately hurts kids.”