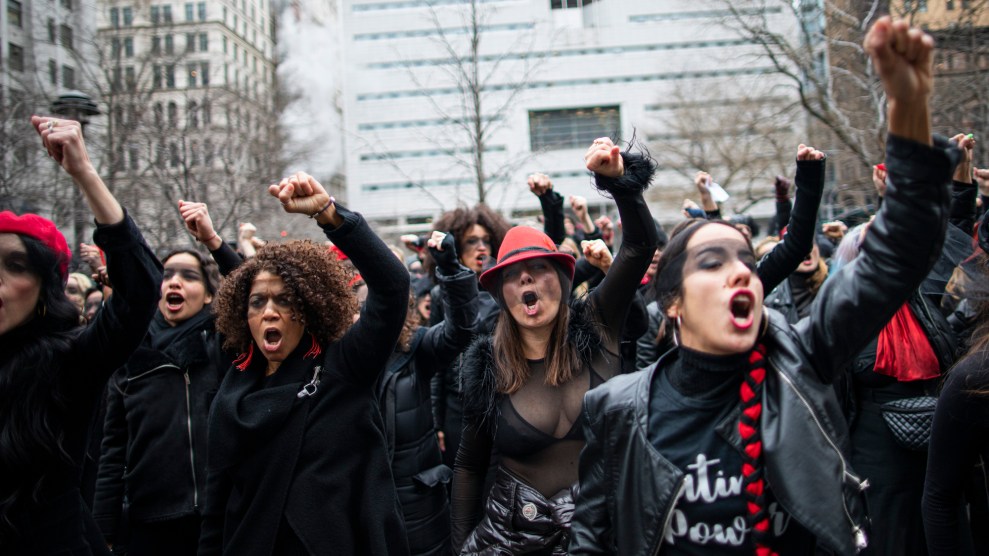 For years, former president Donald Trump has been able to push off a lawsuit filed against him by E. Jean Carroll, a writer and advice columnist who says he raped her in a department store dressing room in the mid-1990s. When Carroll decided to come forward—describing the alleged assault in a book excerpt in 2019—Trump had been president for two years, and the statute of limitations to bring criminal charges or a lawsuit against him had long since passed. Carroll sued Trump for defamation instead, arguing that he’d smeared her in statements to reporters in which he denied he knew her, accused her of fabricating her story to sell books, and insulted her appearance—and has spent years tied up in court, fending off interference from the Justice Department and endless bids for delay.

Now, Carroll and thousands of other sexual assault survivors in New York state are getting a new chance to seek legal accountability against people who harmed them years or decades ago. Under the Adult Survivors Act, New Yorkers who were sexually assaulted as adults but who have run out of time to seek accountability in court will have a one-year “lookback window” to sue their abusers, as well as institutions that were negligent in responding to the assault. While many states have experimented with lookback windows to allow child sexual abuse victim to bring civil claims, the New York law marks only the second time such a grace period has been extended to people who were adults at the time of the assault. (New Jersey was the first.) In a way, the new law is an acknowledgement of the many barriers—ongoing trauma, shame, and fear of retaliation, not to mention ineffective policing—that have prevented survivors from pursuing justice in court. “The fight against sexual assault requires us to recognize the impact of trauma within our justice system,” Gov. Kathy Hochul said when signing the bill.

Until 2019, survivors of second- and third-degree rape in New York State had just five years to get a prosecutor to file criminal charges against their assailant, and typically, even less time to pursue a civil lawsuit. The statute of limitations was extended that year, but it didn’t apply retroactively, meaning that many survivors never had a chance at a court verdict or settlement. “The Adult Survivors Act is the latest step in the state legislature’s reckoning with outdated and ineffective statute limitations for survivors of sexual violence,” Michael Polenberg, vice president of government affairs at New York City victim-support organization Safe Horizon, in a recent webinar. Survivors will have one year to file their suits.

In 2019, New York opened a similar look-back window for survivors of childhood sexual abuse. By the time the window closed in 2021, nearly 11,000 lawsuits had been filed under the Child Victims Act, including 3,336 cases involving the Catholic Church. And while many are still ongoing, some have reached settlements: Prince Andrew, an associate of Jeffrey Epstein, settled a Child Victims Act claim by Virginia Giuffre in February, weeks before he would have been required to sit for a deposition about her abuse allegation. While most lawsuits were filed against relatively deep-pocketed institutions that had allegedly covered up or enabled abuse, some survivors filed against individuals: a former a Lutheran pastor, an elementary school teacher, and others. One plaintiff, who won a $25 million jury verdict against a now-80 year old Boy Scout leader, told a Buffalo News reporter in March that the verdict was meaningful not for the money because jury had believed him and validated experiences. “I probably won’t get a penny out of this, but putting a dollar amount on it makes people know how horrendous it was,” he said.

As the Child Victims Act lookback period came to a close in 2021, survivor advocates undertook a massive effort to pass a similar bill for adult victims. One obstacle: intransigence in the state Assembly, as former Gov. Andrew Cuomo still clung to power amid a torrent of sexual assault and harassment allegations. It took until May 24 of this year—months after Cuomo ceded the governorship—for the act to pass and be signed by Gov. Kathy Hochul. (Cuomo continues to deny the allegations against him. Whether he might face a lawsuit under the new law is still unclear; Charlotte Bennett, a former aide who was one of the first to come forward against the governor, didn’t need it for her lawsuit against Cuomo and his top staffers, since the statute of limitations had not yet expired.)

As with the Child Victims Act, hundreds, if not thousands, of cases are expected to flood the state court system shortly. One firm, Slater Slater and Schulman, has already announced it will be representing at least 750 formerly incarcerated women alleging systemic sexual abuse in New York’s prison and jail systems. State or county governments failed to prevent corrections officers from sexually abusing women while they were in custody, despite knowing that abuse was happening, according to the firm, which is working with civil rights attorney Ben Crump, known for representing the families of Black victims of police violence.

For example, a 1985 report by the Correctional Association of New York found a pattern of “coerced sexual contact” by the majority-male staff Bayview, a medium-security prison in Manhattan where officers “threatened prisoners with disciplinary action or removal from a program if they refused to engage in sexual conduct.” But in the years after, the abuse allegedly continued: Jacquiline Wiggins, now a 58-year-old nurse, told the New York Times that a Bayview guard raped her repeatedly during her incarceration there in the 1990s. She says she still remembers the guard’s haircut, body odor, and teeth, but told no one in the years since—until she learned about New York’s new law. “I suppressed it,” Wiggins told the Times. “I kept it down in my gut. I didn’t think I was worthy. I didn’t think anyone would care.” She’s now one of 200 Bayview plaintiffs suing under the Adult Survivors Act.

As for Carroll, her lawyer informed a federal judge in September that they would be filling a lawsuit in New York when the look-back window opens. A preliminary version of her lawsuit, filed with the court last week, accuses the former president of battery, saying his conduct amounted to first-degree rape.

“We’re finally at the point where we’re about to storm the courts with these really important cases,” victims rights lawyer Carrie Goldberg said in the Safe Horizon webinar teaching survivors about the new law. On Monday, Goldberg’s firm announced it would be working with employment lawyer Susan Crumiller to file cases under the new law—an initiative they call the Survivors Law Project. Litigation isn’t for every survivor, Goldberg warns: It can be an emotionally taxing, grueling process with “the person who may have caused you the most trauma in your life.”

The new law, Goldberg says, isn’t just important for her as a lawyer. She’s also considering whether to file an Adult Survivors Act lawsuit of her own. “I’m weighing the very thing that our clients do,” she says. “How will this impact me emotionally? Energetically? My time? What supports do I have in place?” She’s decided to go through the intake process at her own firm, to lay out all her options. “Just because I know the law,” she says, “doesn’t mean the emotional toll of engaging in litigation about something traumatic is any different than what our clients go through.”

Update, November 23: This story has been updated to note that Cuomo denies the allegations against him.