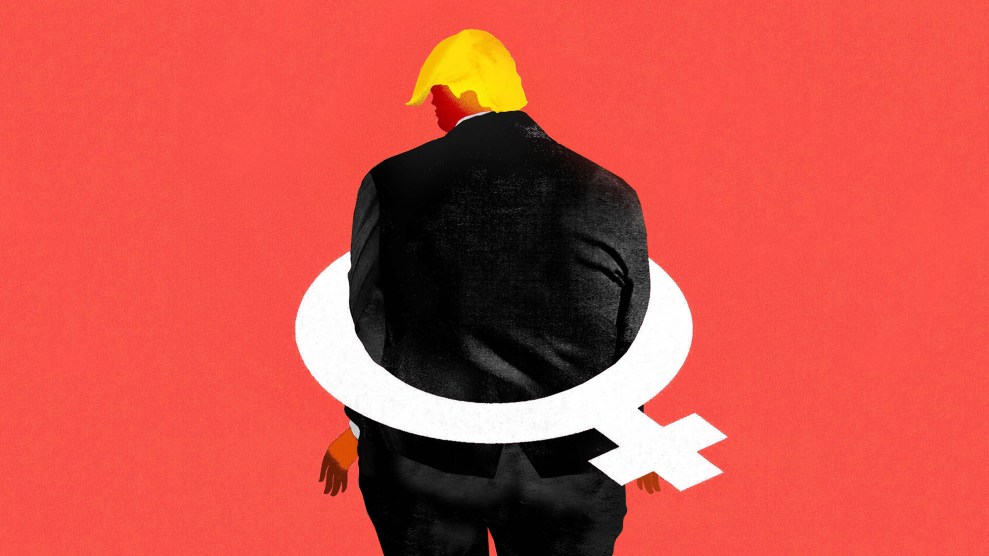 One chilly afternoon in November 2019, a process server stepped through the gold-rimmed doors of Trump Tower on New York’s Fifth Avenue to deliver a copy of an explosive lawsuit and a court summons to President Donald Trump.

In those papers, E. Jean Carroll declared that Trump had raped her in a department store dressing room in late 1995 or early 1996. Carroll, a veteran advice columnist at Elle magazine and one of at least 26 women who have accused Trump of sexual misconduct since the 1970s, claimed that Trump had subsequently smeared her when he denied he knew her, accused her of fabricating her story to sell books, and insulted her appearance in statements to reporters. She was now suing him for defamation, demanding a retraction and damages. “Nobody in this nation is above the law,” her complaint began. “Nobody is entitled to conceal acts of sexual assault behind a wall of defamatory falsehoods and deflections.”

But before her claims could be heard in a New York state court, Trump needed to be served. First, the process server made his way through a Secret Service checkpoint. Then he spoke to the concierge, who called upstairs to a legal office before refusing to accept the documents. The server tried to leave the sheaf of papers and head back toward the lobby’s golden doors, but Secret Service officers stopped him, ordered him to take the papers, and kicked him out. One officer said they had instructions to keep process servers from leaving documents with the concierge, according to an affidavit. Three subsequent attempts to serve papers at Trump Tower and one at the White House ended similarly.

For nearly four years, Trump has wielded the office of the presidency as a shield against lawsuits from women who have accused him of sexually assaulting them before his election. “It started the moment the lawsuit was filed,” Carroll’s lawyer, Roberta Kaplan, says in an email. Trump claimed presidential immunity in state court, argued that he couldn’t be sued in New York because of his temporary residence in the White House, and had the Department of Justice intervene on his behalf.

Now that he’s lost his office to President-elect Joe Biden, Trump is facing the prospect of finally having to deal with both Carroll’s claim and a similar defamation lawsuit filed in New York by former Apprentice contestant Summer Zervos. Legal experts say that both women’s cases could proceed quickly once Trump returns to civilian life. And that means the soon-to-be-former president could imminently face the question of either settling their claims or going to trial over the truth of their allegations.

“Trump now has, essentially, a law firm called the Department of Justice working for him personally.”

Zervos first began speaking out about Trump in the last weeks of his 2016 campaign, after he claimed that he had never sexually assaulted women in the way he had bragged in the Access Hollywood tape. Zervos alleged that Trump had kissed her, groped her breast, and thrust his genitals on her without consent during two 2007 meetings to discuss job opportunities. Trump denied it all, as well as the allegations of other accusers who told their stories in 2016, tweeting that they were “100% fabricated and made-up.” Zervos sued him for defamation over that claim and similar statements a few days before his inauguration.

Since then, Zervos’ case has “lingered in the courts for a significantly longer time than you would typically expect of a defamation lawsuit,” says Amy Kristin Sanders, a media law expert and associate professor at the University of Texas at Austin. Again, Trump’s office protected him. A few months after Zervos filed her case, Trump lawyer Marc Kasowitz debuted an argument he has since returned to repeatedly, insisting that the Constitution prevents a sitting president from being sued in state court. Zervos’ lawsuit should be dismissed, he argued in a motion, because “a state court cannot control President Trump—who uniquely embodies the Executive Branch—or interfere with his ability to perform his duties.” Neither the trial court judge nor a state appeals court was convinced. (Nor was the US Supreme Court when Trump tried to block a grand jury from subpoenaing his tax records using a very similar argument.) “Though he is tasked with significant responsibilities, the President is still a person, and he is not above the law,” wrote Justice Dianne Renwick of the New York Appellate Division, First Judicial Department.

By appealing those decisions again and again, Trump was able to keep delaying Zervos’ lawsuit—and, crucially, to put off being deposed by her lawyers. During a pretrial deposition, Trump would “certainly” be asked under oath about whether he sexually assaulted Zervos, Sanders says. Plus, any deposition is an unwelcome prospect for a legal team whose client has a well-established inability to keep his mouth shut. “He’s a loose cannon,” she says. “You have no idea what he’s going to say. You have no idea what he could open himself up to.” (Neither Zervos’ nor Trump’s lawyers responded to requests for comment.)

For now, Zervos’ case is on hold while the Court of Appeals, New York’s highest court, considers Kasowitz’s presidential immunity argument. Yet once Trump is no longer a sitting president, Kaplan predicts, the court will likely dismiss his appeal.

“I think he thinks attacking these women is good for him.”

Carroll, on the other hand, isn’t just seeking to depose Trump; she wants to get a DNA sample. Shortly after she filed her lawsuit (a judge ultimately permitted her to serve Trump by mail), her legal team asked a lab to look for genetic material on a black Donna Karan dress she says she was wearing when Trump allegedly raped her. The results turned up unidentified male DNA, which, if matched to Trump, could help convince a jury that her allegations were true. (Dispelling speculation about analyzing DNA from one of Trump’s relatives, Kaplan says her team’s experts have concluded that a sample from Trump’s niece, Mary, would not be useful. Kaplan also is representing Mary Trump in a fraud lawsuit against her uncle.)

Trump tried to get Carroll’s lawsuit put on hold until New York’s high court ruled on presidential immunity—and once again, a judge declined. But as Trump faced the prospect of handing over a cheek swab last fall, the Department of Justice swooped in. At the request of the White House, DOJ lawyers argued that Carroll’s suit rightfully should be against the United States government, not Trump personally, because he was acting within the scope of his employment when he called her a liar and said she was “not my type.” In other words, taxpayer-funded lawyers were trying to help the president avoid facing his accuser in court. Barbara McQuade, a former US attorney, explained at the time that this is a “fairly routine thing” for the feds to do—generally in work-related cases that do not involve the president, such as a mail carrier who is sued after an accident involving a postal truck.

If the DOJ’s move had succeeded, Carroll’s lawsuit would have been dismissed since the United States can’t be sued for defamation. So far, the gambit hasn’t worked. On October 26, a federal judge ruled that the president didn’t count as a government employee—and even if he did, Trump’s statements about Carroll weren’t employment-related. The DOJ has 60 days to appeal that ruling, according to Kaplan. Regardless, it will soon be up to Biden’s administration to decide whether the government continues intervening on Trump’s behalf. “Trump now has, essentially, a law firm called the Department of Justice working for him personally,” says Bruce Johnson, a First Amendment lawyer. “That is one of the advantages that he will not have after January 20, 2021.”

Defamation lawsuits are, at least in theory, about the truth: If a statement is true, it cannot be defamatory. That means if either of these cases proceeds to trial, courtroom arguments will center on whether Trump was telling the truth when he called Zervos and Carroll liars—and whether they can convince jurors that Trump assaulted them. If they win, both women want Trump to retract his statements and pay damages. “Anytime you have a defamation lawsuit, we always have to look at the incidents that underlie the alleged defamatory statements,” Sanders says. “Fundamentally, this defamation case will hinge on how much evidence is there that they didn’t lie, that these incidents actually took place.” According to Kaplan, Carroll is open to a settlement only if it allows her to keep talking and writing about what Trump allegedly did to her.

Settling the cases once he leaves office might be an appealing option for Trump, who could make them go away outside the glare of the campaign spotlight. “He’s a guy who will always promise that he’s going to fight a case, but when push comes to shove, he will cough up money to settle,” Johnson says, pointing to the federal fraud lawsuit against Trump University. Leah Litman, an assistant law professor at the University of Michigan, sees it another way. “I honestly don’t think he would worry about the political fallout,” she says. “I think he thinks attacking these women is good for him.”

For now, Carroll’s case is proceeding. “Once he is no longer president, Donald Trump should have more time to devote to responding to the discovery requests in our case, including producing his documents, providing a DNA sample, and having his deposition taken,” Kaplan says. “We look forward to moving ahead with our case.”