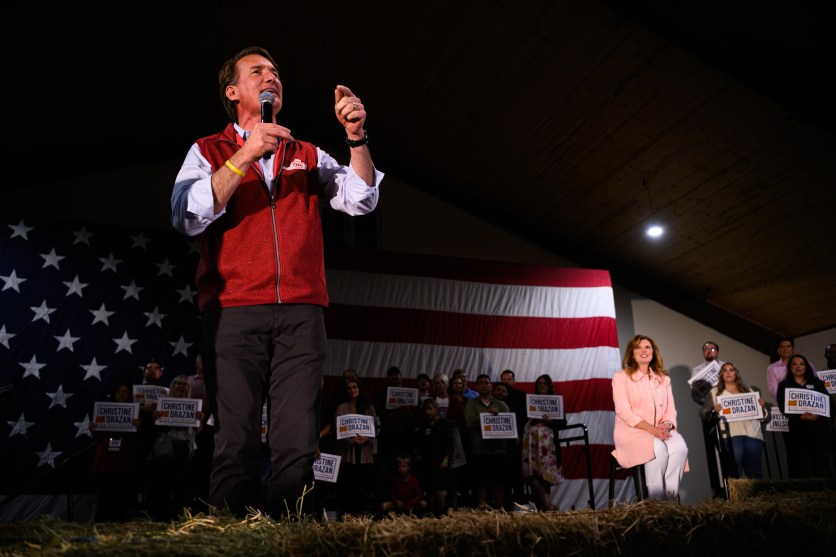 Is Glenn Youngkin running for president? Paul Ryan thinks he should. A voter in Tucson told him to. The Republican governor of Virginia smiled, perhaps a little too eagerly, when an ABC News reporter asked Youngkin again on Wednesday evening after firing up a crowd of conservative voters in Scottsdale, Arizona. “I haven’t really thought about 2024; we’re focused on 2022,” he said. He was in Arizona, he continued, because “every state deserves a Republican governor.”

But the presence of the candidate seated a few feet away from him, in a small airplane hangar at the offices of a company that makes parts for firearms, answered the question more frankly than Youngkin is prepared to right now. Of course he’s keeping his options open; why else would somebody interrupt their busy schedule to do six events in one day with Kari Lake?

In Arizona, Youngkin was eager to show conservative voters that he is, above all, a loyal party man, by demonstrating as explicitly as he could that there’s a place for the most fervently conspiratorial election deniers in the highest ranks of the party.

Youngkin, the former president and COO of the private-equity behemoth the Carlyle Group, was elected in an upset last year by riding a wave of opposition to pandemic restrictions and a racist panic about Critical Race Theory, while keeping Donald Trump himself at arm’s length. Trump endorsed Youngkin, but Youngkin never appeared with Trump. It was a flimsy sort of two-step, but for plenty of Republicans it was enough. Youngkin was a moderate, not in an actual policy sense, but in a purely aesthetic one; he represented a return to the party’s bread-and-butter—a tall, rich white man whose signature accessory was not a red hat but a red vest.

Lake, the Republican nominee for governor of Arizona, is not trying to fool anyone into thinking she is a retro Republican; she is running instead as the next evolution of the performance-based politics of the Trump era. A former local TV news anchor at Phoenix’s Fox affiliate, she questioned Fox News’ decision to call the state for Joe Biden on air, quit her job not long after, and became one of Arizona’s most fervent proponents of Trump’s false narrative of a stolen election. She has said that “you have to be smoking Hunter Biden’s crack pipe” to believe that Joe Biden won Arizona. She has called on the state to decertify the 2020 election. She has vowed to “get to the bottom” of what really happened in the “corrupt” election before she does anything else in office, although she also says that she her first priority will be to declare an “invasion” on the southern border. According to the most recent polls, which gives her a narrow lead over Democratic secretary of state Katie Hobbs—whom Lake believes should be in prison—she just might get that chance.

Flying across the country to campaign with one of America’s most fervent election deniers is a choice, and it was meant to be seen as one. Youngkin was very deliberately asserting that the Republican Party must come together as it is, not by cleaving off its most anti-democratic elements but by elevating them to even greater power, so that the anti-democratic elements can use their new authority in ways that are beneficial to Republicans. This is not a new direction so much as an acceptance of the current one.

At the evening rally in Scottsdale, Youngkin—who has begrudgingly said that he would have voted to certify the election and also begrudgingly said that Joe Biden is the legitimate president—did not discuss the 2020 election that had helped inspire his endorsee to get into politics, and Lake did him the kindness of largely avoiding the subject in her own remarks. They focused, instead, on the general-election politics that binds them—a demand for more (and more militant) resources at the southern border; an end to “woke” education; and a freedom from CDC tyranny. But you didn’t have to look far to find a reminder of the small-d democratic stakes of the election, and the forces that had powered Lake’s rise—as they shook hands with voters afterwards, Mark Finchem, the election-denying candidate for secretary of state, lurked just a few feet away, in his characteristic white cowboy hat.

In the scrum with reporters afterwards, Youngkin tried to elide his disagreement with Lake and Finchem over whether the current president is an imposter. Governors, he said, “have to go to work in order to provide much more confidence in the election process,” he said, before comparing Democratic complaints about the Florida recount and Russian election interference to Trump’s invented conspiracy. “It’s not just Republicans. It’s Democrats. I ran against someone who said the election was stolen in 2000. And in 2016 they said that Donald Trump wasn’t legitimately elected. So this is not a Republican problem, it’s an American challenge. And our job as governors is to invest in the process.”

“This is what I’ve gone to work to do,” he said. “And I can guarantee you that Kari’s going to go to work as well.”

That’s certainly one way of describing what Lake wants to do. But it was a neat rhetorical trick on Youngkin’s part, to turn support for a lie that led to a violent attack on the Capitol into just another opportunity for governors to roll up their sleeves.

In Arizona, Youngkin was eager to show conservative voters that he is, above all, a loyal party man, by demonstrating as explicitly as he could that there’s a place for the most fervently conspiratorial election deniers in the highest ranks of the party. But if the party isn’t moderate, the Party Man isn’t going to be either.

Wyoming Rep. Liz Cheney, the former House Republican conference chairwoman who praised Youngkin after his election last fall, criticized him for the “accomodation” he was granting to the party’s most anti-democratic actors.

“Republicans don’t agree on everything,” he said Wednesday, when asked about Cheney’s comments. “But I’m telling you, we agree on so much.”