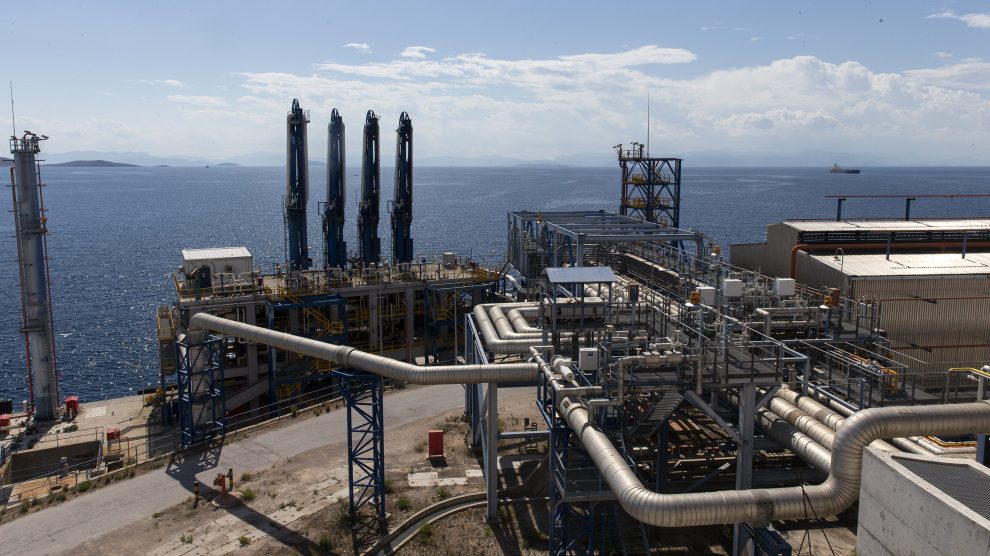 The Russian tanks and armored vehicles had barely begun to roll into Ukraine before the fossil fuel industry in the US had swung into action. A letter was swiftly dispatched to the White House, urging an immediate escalation in gas production and exports to Europe ahead of an anticipated energy crunch.

The letter, dated February 25, just one day after Vladimir Putin’s forces launched their assault on Ukraine, noted the “dangerous juncture” of the moment before segueing into a list of demands: more drilling on US public lands; the swift approval of proposed gas export terminals; and pressure on the Federal Energy Regulatory Commission, an independent agency, to greenlight pending gas pipelines.

By the winter of 2022, there should be “virtual transatlantic gas pipelines” flowing from the US to Europe, the authors envisioned.

“Just weeks after those demands were laid out, President Biden was turning industry wishes into policy.”

Six months on from the letter, Russia’s invasion has stalled and in places retreated, but the US gas industry has achieved almost all of its initial objectives. Within weeks, Joe Biden’s administration adopted the gas industry’s major demands as policy. They paved the way for new pipelines and export facilities, established a new taskforce to boost gas exports to Europe and approved $300m in funding to help build out gas infrastructure on the continent.

“I can’t even begin to tell you how much the momentum has changed for companies in the United States that have wanted to bring their projects forward and just haven’t been able to get long-term contracts,” said a jubilant Fred Hutchison, president of LNG Allies, the industry group that sent the letter, just three weeks after both the military and lobbying pushes started.

The rhetoric of the Biden administration, which styled itself as deeply committed to tackling the climate crisis, had “changed substantially” within just a week, Hutchison noted. Biden’s creation of the gas export task force was a “direct response to the proposal put forward by LNG Allies”, the group boasted in March.

But the embrace of liquified natural gas—or LNG, gas that has been cooled to -260F, turning it into a liquid that can be shipped overseas—as an act of defiance to Putin has dismayed climate activists who warn it will lock in decades of planet-heating emissions and push the world closer to climate catastrophe.

“The fact that just weeks after those demands were laid out, President Biden was turning industry wishes into policy is a damning indictment of a president who had promised to tackle the climate crisis,” said Zorka Milin, senior adviser at Global Witness, which shared a new report on the escalation in gas infrastructure with the Guardian.

Milin said the US gas industry was “licking its lips” at the onset of the Ukraine war. “There is no doubt that Biden’s apparent capitulation to the gas industry has opened the door for these companies to continue to profit off the backs of those suffering in Ukraine, those living close to new gas infrastructure in the US and the millions affected by climate change globally,” she added.

LNG Allies, which is the operating name of the US LNG Association but does not publicly disclose its members or donors, has notched a number of notable wins since the start of the war. The group wanted six specific gas export applications to be expedited, and within three weeks the US Department of Energy granted two of them, Cheniere Energy’s Sabine Pass project in Louisiana and its Corpus Christi operation in Texas.

The licenses, which allow the two facilities to export 720 million cubic feet per day of natural gas, will act as an “important component to global energy security” by helping US allies in Europe, the department said, noting that American LNG exports are set to grow an additional 20 percent by the end of this year. Hutchison marked the news by declaring “two [licenses] down and four to go!”

By the end of April, two further LNG export licenses had been issued. “Four down and two to go!” LNG Allies exclaimed in a news release. New gas terminals have a lifespan that is measured in decades, which jars with agreed climate goals: the International Energy Agency has said no new fossil fuel infrastructure can be built if the world is to avoid dangerous global heating.

Undeterred, the Biden administration has vowed to supply the European Union with at least 15 billion cubic meters of gas, equivalent to about half the amount of gas burned by Spain each year, by the end of 2022. The Department of Energy did not respond to questions as to how the new gas operations fitted with Biden’s goal of slashing US emissions in half this decade.

“The choice isn’t gas or renewables at the moment—it’s gas or coal.”

The US only began shipping LNG overseas in 2016 but has now become the largest exporter in the world, surpassing longtime export leaders Qatar and Australia. The majority of the gas is fracked in the Permian basin, an oil- and gas-rich area in Texas and New Mexico, before being taken in pipelines and by train to the Gulf of Mexico coast, where it is chilled and loaded on to ships.

Three export facilities under construction on the coast are set to further cement American dominance of the sector when they are fully operational by 2025, sandwiched in a landscape already thick with petroleum refineries and plastics companies that cause severe air pollution and noise that blights nearby residents, mostly people of color.

Much of the new gas infrastructure won’t be operational for several years, which may be beyond the timeframe of the Russia-Ukraine conflict that has squeezed supplies and caused gas prices to spike. So much LNG export is planned or under construction, adding up to about half of all total US gas production, that it will probably cause gas prices to climb for domestic American users, according to Clark Williams-Derry, analyst at the Institute for Energy Economics and Financial Analysis.

“It’s beginning to eat into the amount of gas available to domestic consumers,” said Williams-Derry. “We will see very severe impacts on domestic US gas prices. We will see the impacts for as long as the eye can see.”

The crisis in Ukraine has, however, helped several LNG companies record bumper profits this year. The export company Cheniere earned $3.8bn more in cash from its operations in the first half of 2022 compared to the same period last year, while Sempra, a gas liquifying company, has enjoyed an eightfold increase in LNG sales to Europe.

Gas has long been touted as a helpful “bridge fuel” in dealing with the climate crisis as it emits less carbon dioxide than coal or oil and provides energy for processes such as steel making that renewables can’t quite manage yet. “The choice isn’t gas or renewables at the moment—it’s gas or coal. Gas can help drive home that transition to clean energy,” said David Dismukes, an energy expert at Louisiana State University. “The news at the moment will grease the wheels for more development of LNG, as it’s shaping up to be a tough winter for Europe.”

But the extraction, transportation and liquefaction required to create LNG for export creates almost as much emissions as burning the gas itself, according to a 2020 analysis by the Natural Resources Defense Council (NRDC).

The NRDC said these extra emissions mean LNG’s greenhouse gas impact is “at best, only modestly smaller than that of other fossil fuels.” A key problem is that gas drilling produces a large amount of methane, a potent greenhouse gas that is far more effective at trapping heat than carbon dioxide.

Climate campaigners argue that the US and Europe should invest heavily instead in renewable energy such as solar and wind, to help negate future price shocks as well as slash emissions. “Russia’s aggression in Ukraine, rising energy prices and the devastating impacts of climate change should be the biggest prompt yet to end the world’s dependence on fossil fuels,” said Milin. “Instead, an already rich industry is trying to seize the moment and force the world to double down on the very mistakes that have led us to this situation.”