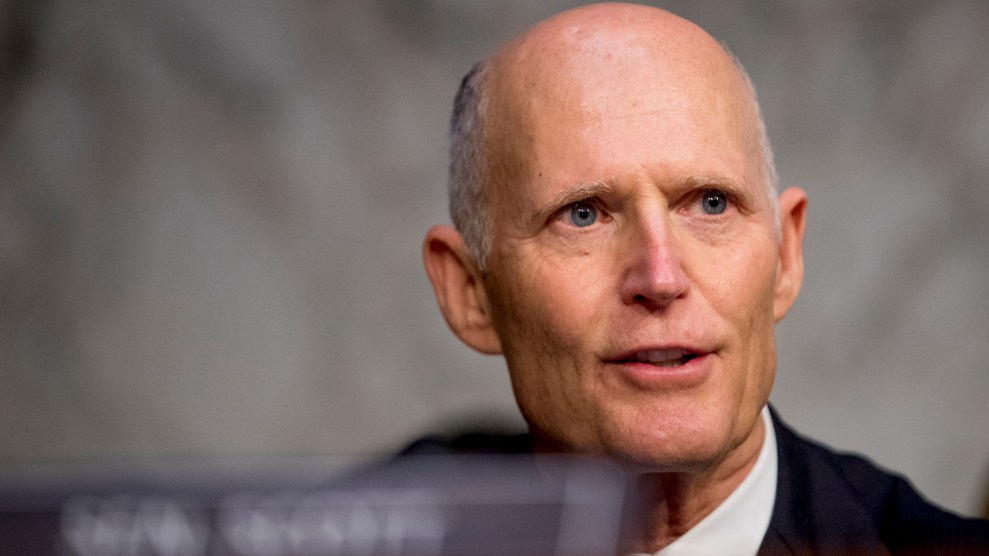 The false claim that Donald Trump won the 2020 presidential election has become gospel among most Republicans. Polls over the past year have shown that nearly 70 percent of all Republicans believe that President Joe Biden stole the election from Trump. The stolen election conspiracy theory runs so deep that, according to the New York Times, more than 350 Republican state legislators in nine critical swing states had taken steps to either discredit or overturn the 2020 election results. Election deniers represent 44 percent of GOP legislators in those states.

In light of this it seems notable that on Sunday, the man charged with helping the GOP win back the Senate, went on national television and admitted that Biden was in fact the country’s duly elected president:

Rick Scott, chairman of the National Republican Senatorial Committee, is not the only Republican senator to publicly acknowledge that Trump lost the 2020 election, but he doesn’t have a lot of company. In December 2020, a Washington Post survey of all GOP members of Congress found only 27 who would come out and admit that the election was not, in fact, rigged, and that Trump had lost fair and square. Nearly 90 percent of the Republican members simply refused to say who they thought won the election.

In the Senate, Scott is joined only by Senate Minority Leader Mitch McConnell (R-KY), Sen. Mitt Romney (R-Utah), who voted to impeach Trump, Sen. Ben Sasse (R-Neb.), and latecomer Sen. Mike Rounds (R-S.D.), who finally admitted in January that Biden had fairly won the election. For this indiscretion, Rounds was promptly attacked by Trump, who released a statement saying, “‘Senator’ Mike Rounds of the Great State of South Dakota just went woke on the Fraudulent Presidential Election of 2020. He made a statement this weekend on ABC Fake News, that despite massive evidence to the contrary, including much of it pouring in from Wisconsin, Georgia, Arizona, Michigan, Pennsylvania, and other states, he found the election to be ok — just fine. Is he crazy or just stupid?”

What makes Scott’s admission particularly noteworthy is that he was one of eight Senate Republicans who voted to overturn the 2020 election results. Scott has hitched his wagon so closely to Trump, particularly in messaging and fundraising campaigns for the 2022 midterm elections, that he invented an award to give to the former president in April 2021. Making Trump the first recipient of the “NRSC Champion of Freedom” award, Scott called Trump “a proven champion for all Americans.” Trump has reportedly urged Scott to run against McConnell for the senate leadership post, and his PAC has defended Scott’s unpopular “11-point plan to rescue America” that included raising taxes on poor people and sunsetting Medicare and Social Security, two programs used by millions of voters in his home state. But now, Scott, the richest member of the Senate, seems to be gearing up to run for president himself. Last week, he launched a second national ad campaign targeting Biden, calling him “incompetent” and “confused.”

Given Scott’s acknowledgment of Biden’s legitimacy and his recent moves suggesting he is mulling a presidential bid, it’s a wonder that Trump hasn’t denounced him in a press release. Though perhaps Trump, a famous devotee of TiVo, has yet to watch Scott’s appearance on Face the Nation.