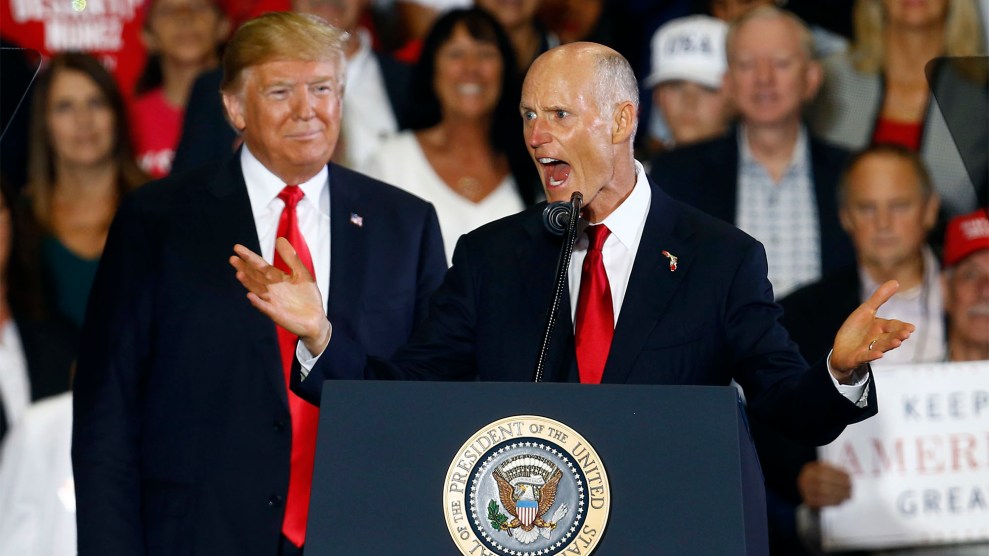 On Thursday night, Florida Gov. Rick Scott, who is locked in a razor-thin Senate race with incumbent Democrat Bill Nelson, falsely accused Democrats of trying to “steal this election” and called on law enforcement to monitor the counting of ballots in two of the state’s most Democratic counties. He also filed a lawsuit, along with the Republican Party, seeking access to Broward County’s ballot records. His unsubstantiated allegations of “rampant fraud” were amplified by top Republicans, including President Donald Trump, who tweeted, “Law Enforcement is looking into another big corruption scandal having to do with Election Fraud in #Broward and Palm Beach.”

Scott’s lead over Nelson is about 15,000 votes, and the race appears headed for a recount, along with the race for governor. Republicans are angry over late ballots being counted in Palm Beach County and Broward County, the latter home to heavily Democratic cities north of Miami like Fort Lauderdale. But while Broward’s election supervisor, Brenda Snipes, who was appointed by former Gov. Jeb Bush, has been criticized for her handling of a past election, there is absolutely no evidence that she is “creating ballots,” as Trump lawyer Rudy Giuliani tweeted, or rigging the count to favor Democrats. Trump also suggested that Fusion GPS, the opposition research firm that helped put together a dossier on Trump’s Russia connections, was somehow involved in an effort to steal the Florida election:

“There’s just no evidence right now that anything illegal has happened,” writes Politico’s Florida Playbook. “The vote totals are simply changing as more ballots from Democratic counties are being uploaded.” On the contrary, the call by the governor for law enforcement to monitor the counting of ballots in his Senate race seems designed to prevent every eligible ballot from being fairly counted.

Scott has a long history of making it harder for Democratic constituencies to vote. As governor, he rigidly enforced a felon disenfranchisement law that prevented 1.6 million Floridians from voting in the 2018 elections, including 500,000 African Americans. He restored voting rights to just 3,000 people while in office—compared with 155,000 by his predecessor, Charlie Crist—with white ex-felons twice as likely as black ones to have their rights restored. He signed legislation in 2011 that reduced early voting days, leading to seven-hour lines in 2012 in Democratic areas of Miami, and that severely restricted voter registration drives, forcing nonprofit groups like the League of Women Voters to shut down registration efforts in the state. He also ordered county supervisors to purge the voting rolls of suspected noncitizens, but the vast majority of people on the state’s purge list turned out to be citizens.

There were numerous voting problems in the state in this election. At least 15,000 absentee ballots were rejected as of last week because voters didn’t sign the envelope, as required by state law, or the signatures didn’t match voter registration databases. Young and minority voters were more likely to have their ballots rejected. Other voters reported never receiving absentee ballots they requested.

The situation is being compared to the infamous 2000 election, when the Supreme Court stopped a full recount in Florida, leading George W. Bush to carry the state.

Republicans are using the same strategy in other states. On Thursday in Georgia, Brian Kemp, who had been overseeing his governor’s race as secretary of state, accused his Democratic opponent, Stacey Abrams, of trying to “steal this election” after Abrams called for all provisional ballots to be counted before Kemp declared victory. Kemp leads Abrams by 63,000 votes, and that race could also be headed for a recount.

In Arizona, Republicans sued to limit the counting of mail-in ballots in the tight Senate race between Democrat Kyrsten Sinema and Republican Martha McSally. A court rejected the motion, and Sinema has narrowly pulled ahead in the race.