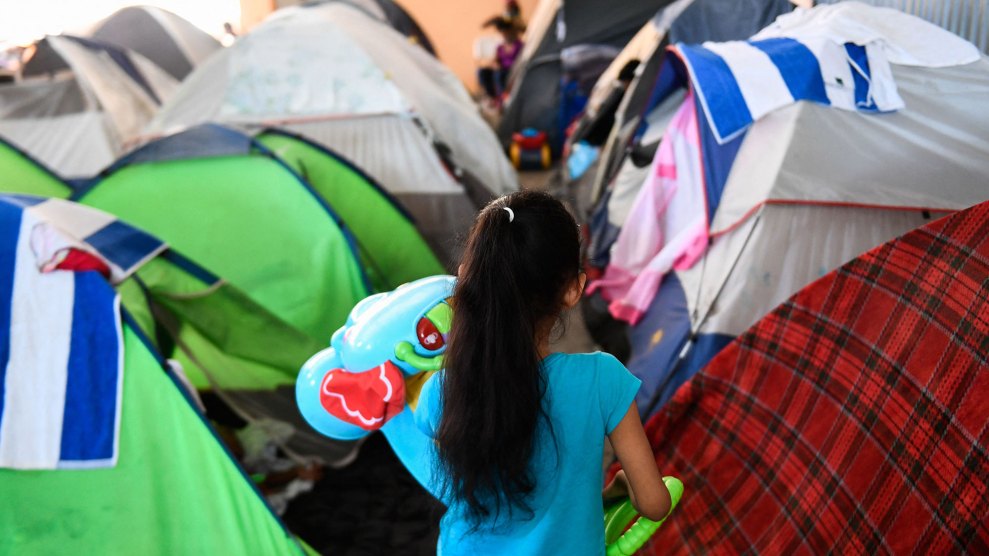 A child carries a toy as they walk past tents where they live with their family in the Movimiento Juventud 2000 shelter with refugee migrants from Central and South American countries including Honduras and Haiti seeking asylum in the United States, as Title 42 and Remain In Mexico border restrictions continue, in Tijuana, Baja California state, Mexico on April 9, 2022.PATRICK T. FALLON/AFP via Getty Images

Department of Homeland Security Secretary Alejandro Mayorkas said on CNN on Sunday that the US is prepared to handle an increase of migrants and asylum seekers at the border once a pandemic closure policy is lifted later this month. Mayorkas said DHS has been planning since September for the end of Title 42, a Trump-era measure aimed at slowing the spread of Covid. He noted that the policy “is not going to be around forever because quite frankly we want to conquer the pandemic and put it behind us.”

CNN’s Dana Bash highlighted concerns raised by Republicans and some Democrats in Congress, who say DHS is not ready to handle a border no longer subject to Title 42 policy, but Mayorkas said he respectfully disagreed, pointing to a 20-page memo released last week that describes federal plans ahead of the scheduled end to Title 42 on May 23. He acknowledged that if border officials see the highest estimates of more than 15,000 people per day coming after that date, it would put an “extraordinary strain on our system,” but said that “we are preparing for it,” not just on the US side of the border, but with “partners” to the south.

Back in March 2020, in the frightening first phase of the Covid pandemic, the Trump administration used an obscure health law known as Title 42 to close the border to migrants and asylum-seekers. It was used to quickly expel non-US citizens, without giving them proper asylum screening. (Seeking asylum is legal under US law.) Title 42 was supposed to be a temporary measure to stop the spread of Covid, the Trump administration said, though as I’ve reported before, it was much more than that:

Trump and Stephen Miller were always on the lookout for ways to close the border to migrants. Before the pandemic, Miller, a supporter of white nationalism, had unsuccessfully tried to use public health code and diseases before as a way to stop migration into the United States. As Covid-19 descended, Trump and Miller seized on the opportunity to invoke Title 42 to achieve their goals. As the nonprofit Human Rights First stated in a report: Title 42 was used “to evade refugee law.”

Much to the disappointment of immigrant and human rights groups, the Biden administration not only continued using Title 42 at the border even as pandemic restrictions eased, but it also defended the policy in court. As we’ve reported, public health experts have opposed Title 42, calling it xenophobic, cruel, and unlawful:

And it has also been dangerous. The policy is partly the reason for the increase of apprehensions over the last two years along the US-Mexico border because so many people who are quickly turned back soon try again. The policy is also likely related to the increase of migrant deaths over the same time period. Prior to Title 42, asylum seekers who turned themselves in to Border Patrol in between ports of entry were not immediately expelled without being screened. Now, they’re immediately sent back to Mexico, forcing more people to try to cross in more remote areas and avoid border officials. Human Rights First has documented extensive evidence of crimes against migrants quickly expelled under Title 42. As of March 15, 2022, the nonprofit had collected almost 10,000 cases of kidnapping, torture, rape, assault, and other violent attacks on people stuck in Mexico under this policy.

The policy has been used to turn back migrants and asylum seekers more than 1.5 million times in the last two years. US border officials have recently exempted Ukrainians from the policy, allowing them to enter. When Bash asked Mayorkas if he had an opinion on whether Title 42 should or shouldn’t be in place, he responded: “I do not, because I am not a public health expert. But it’s my responsibility to plan and execute as it is in place, and plan, prepare, and execute for the day when it won’t be.”

Much of the criticism from those who oppose Title 42 is that it was never meant to be used as an immigration enforcement policy. It was a public health rule—yet, in recent weeks, the CDC and the Biden administration have lifted pandemic restrictions and said the US is “out of the pandemic phase.” Earlier this week, a federal judge in Louisiana said he planed to issue a temporary restraining order that would stop the Biden administration from winding down Title 42 in preparation for its shut down in late May.

While Mayorkas said the US will be able to process more migrants arriving at the border, he remained on message with what Biden and Vice President Kamala Harris have said to those who are planning the trek north: “Do not come…our border is not open.”

However, the reality is that such messaging from US leaders rarely factors into the decision of migrants to flee their home countries. In 2019, a record high number of migrants arrived at the border, despite Trump’s harsh anti-immigrant messaging.