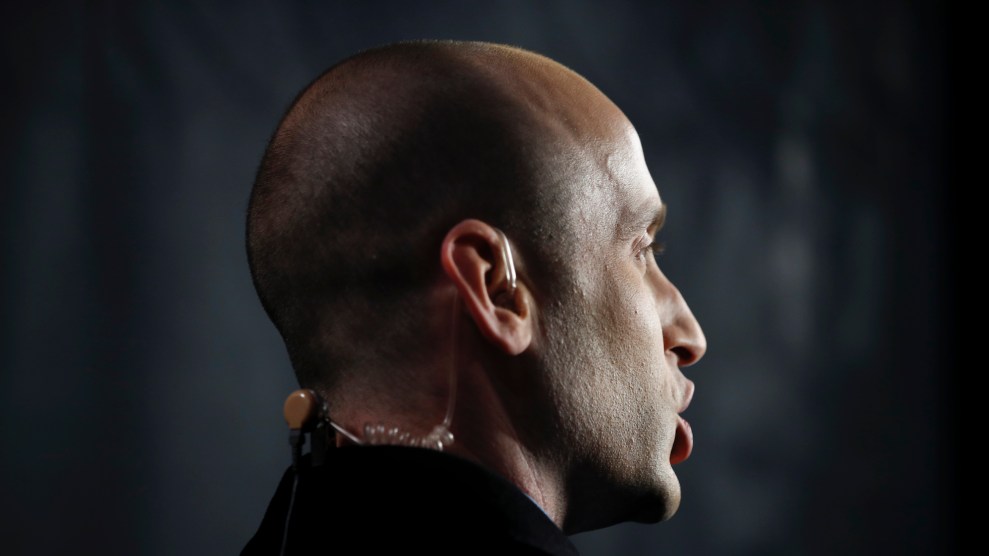 In private emails in 2015 and 2016, President Donald Trump’s top immigration adviser touted a vilely racist novel that warns of a migrant invasion, promoted the ideas of white nationalist publications, and raged at retailers who stopped selling Confederate flags in the wake of the massacre of black churchgoers in Charleston, South Carolina.

On Tuesday, the Southern Poverty Law Center published excerpts of emails Stephen Miller, the architect of Trump’s assaults on immigrants, sent to the right-wing outlet Breitbart. Miller’s embrace of ideas and language used by the “white replacement” conspiracy theorists who populate alt-right forums has long been known. But the unusual thing about the emails, which were provided to the SPLC by a disaffected former Breitbart editor, Katie McHugh, is that they come from a time when Miller was willing to put his ideas in writing. These days, well aware that he’s a target for Trump’s critics, he’s careful to avoid a paper trail by sticking to phone calls.

In a normal administration, the views laid out in Miller’s emails would be disqualifying. In a Trump administration, it makes him essential. In fact, many of the opinions he laid out in the emails have become part of the policies Miller has helped enact in the White House, from cutting refugee admissions to record lows to separating families at the border.

The SPLC has laid out the full range of Miller’s views disclosed in his emails on its Hatewatch blog. But here are a few of the most incendiary elements:

Comparing the pope’s rhetoric to a racist fever dream

In September 2015, while working for then-Sen. Jeff Sessions (R-Ala.), Miller wrote to McHugh:

Also, you see the Pope saying west must, in effect, get rid of borders. Someone should point out the parallels to Camp of the Saints.

As I wrote last year, The Camp of the Saints is a 1973 French novel that’s become a favorite among white nationalist for obvious reasons:

The book’s plot centers on a horde of 800,000 Indians floating toward the French Riviera and led by a man called the Turd-eater who eats feces. [The author] implies that the solution to the invasion would be to massacre the Indians upon arrival, but empathy gets in the way, and the Indians conquer France.

The fact that those men died in defense of slavery did not seem to matter to Miller.

When it came to the more practical matter of directing Breitbart’s coverage, Miller recommended that McHugh go on Amazon to find “commie flags” that were still for sale.

Like his former boss, Sessions, Miller admires the 1924 immigration law that favored Northern Europeans and dramatically cut immigration until it was replaced in 1965. In the emails, Miller frequently praised Calvin Coolidge, the president who signed the law, who has become a hero to anti-immigration activists on the far right. He wrote during Immigrant Heritage Month in June 2015:

This would seem a good opportunity to remind people about the heritage established by Calvin Coolidge, which covers four decades [after the 1924 law].

As the Atlantic has shown, Coolidge’s views about immigrants are best captured by an article he wrote for Good Housekeeping in 1921:

The Nordics propagate themselves successfully. With other races, the outcome shows deterioration on both sides. Quality of mind and body suggests that observance of ethnic law is as great a necessity to a nation as immigration law.